About a year a year ago, I started becoming a Wednesday night regular at Chassis Arcade on Østerbro, Copenhagen. It's located in a basement in Faksegade, and on Wednesday nights, it's THE place to be. It's always packed with lovely and friendly people, there's funny contests, people are playing, talking and having a brewsky or two, and after the arcade closes at 10 o'clock, we hit a nearby pub and have a few drinks. Ever since my first Wednesday there, a machine had been standing in the corner turned off. It was a Strata Bowling; not the one with the trackball depicted in the KLOV link, but actually the version that uses a real cue ball and IR-sensors to detect the direction and speed of the ball being thrown. The game is really cool, and behind the brand Strata actually stands Incredible Technologies that later made some very famous titles including the Golding Tee series.
The problem with this poor machine was, that it kept blowing the fuse on the logic board. Chriss and Julian (the owners of Chassis Arcade) had tried a few things, but couldn't get it to work, so they asked me if I'd have a look at it. And that's how the PCB ended up on my test bench. 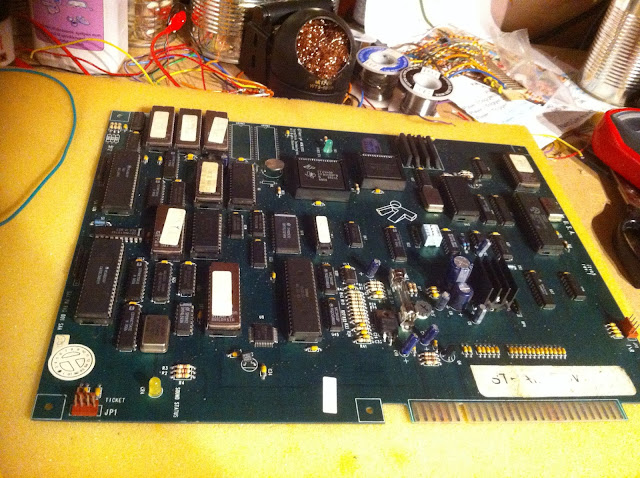 The edge connector is (besides the controls) JAMMA compatible, so I didn't need to make an adaptor. I didn't have any fuses with the correct form factor (the big ones), so I started by just hooking up one the small ones using some crocodile test wires 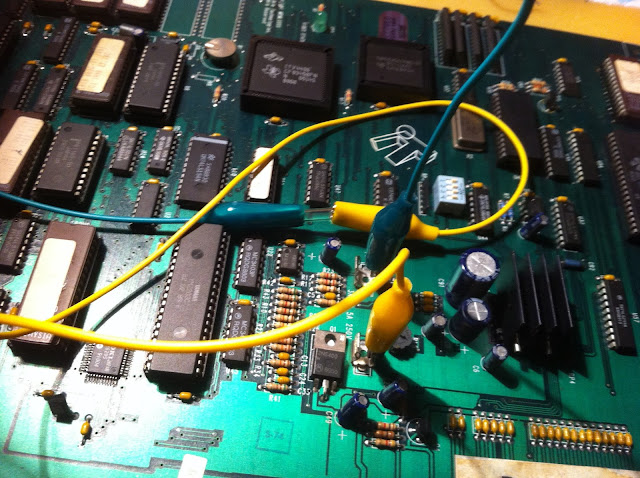 however the game wouldn't start at all. Pretty soon I found out why

the poor board didn't get enough juice; I guess those test wires has way too much resistance in them. On the first picture I measure before the fuse, and on the second one after. So I made an alternative solution 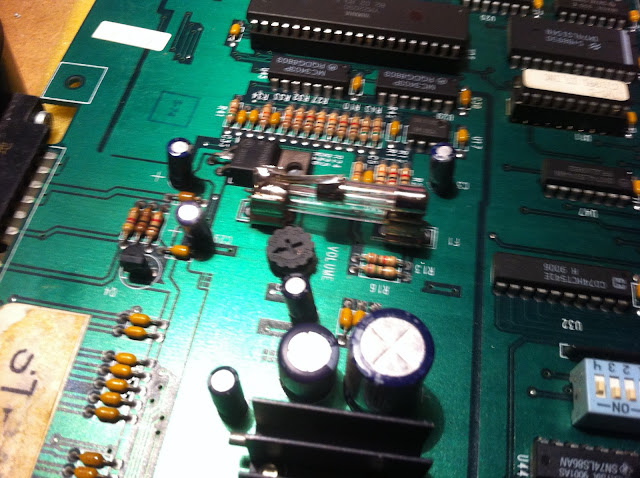 I piggy backed the little fuse on top the big blown one. And now the game actually booted up... no blown fuse or anything! 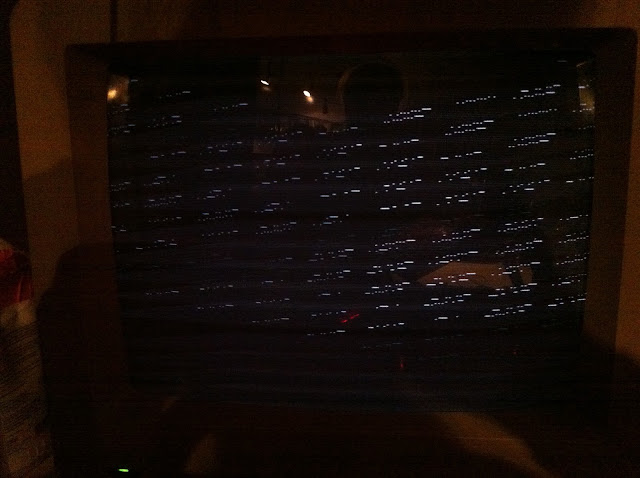 I heard a fine start-up jingle, but the display wouldn't sync properly. I have had such problems before, due to the fact that I'm using a Commodore monitor for test instead of a real arcade monitor, so I just assumed that this was one of those cases as well; more on that later...
The board now seemed to be booting to some extend, so before I returned it to Chriss and Julian, I decided to see if it might have any other obvious errors. A cell battery should always alert a conscientious arcade repper, and this was no exception 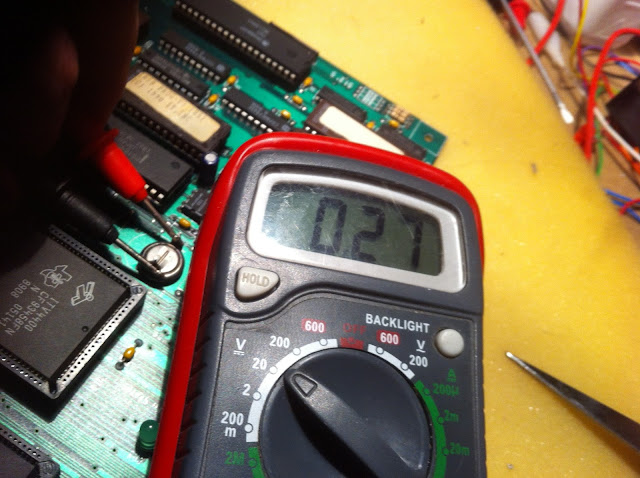 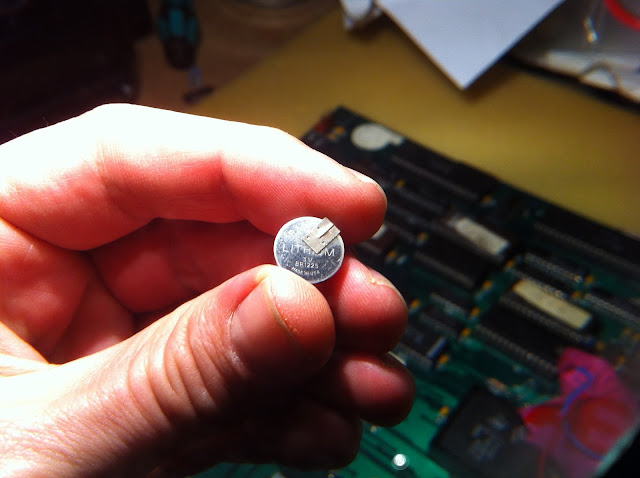 The battery is 3V, but gave a reading of 0.27V. So it was desoldered. I didn't have a replacement at that time, so I made this rather crude solution for a start

just using 2 standard AAA batteries in series connected with wires. Now I was pretty confident, that the problems had been fixed, and that the syncing wouldn't be a problem once it got connected to a proper arcade monitor. So I proudly brought it back to the arcade...

After some time, Julian found time to connect it in the cab only to find, that the piggy backed fuse blew right away }:-( So home to me it went again.

It now sat on the shelf for a couple of weeks, while I was doing some other stuff. Amongst that, I had to hook a Q*bert Qubes, that uses positive horizontal and vertical sync instead of negative composite (as pretty much all JAMMA boards use), in my test bench. While googling on how to convert the syncing signal to composite negative sync, I learned that some PCBs actually has a dip switch setting to switch between positive and negative sync. Hmmmm, I wonder!?.... try looking at page 11 in the manual (in the paragraph "SYNC").
So I grabbed the board from the shelf, flipped SW1, made another crude "solution" to the fuse problem 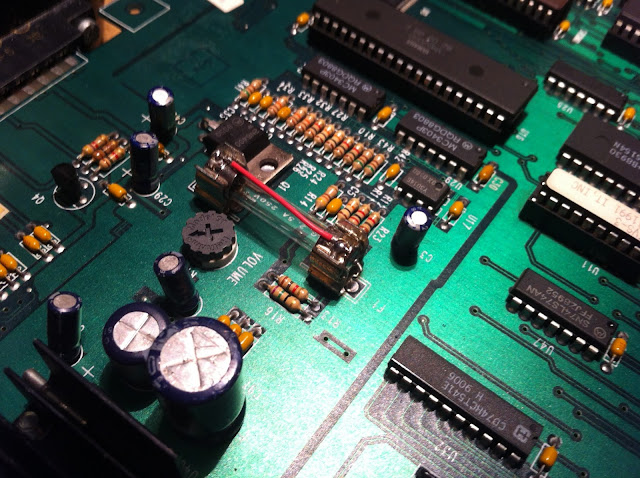 (plz don't try this at home), and applied power

IT WORKS! };-P
I couldn't get the game to actually start due to the "CUE BALL IS MISSING"-detection, but when I hit the service button, it bought up the service menu 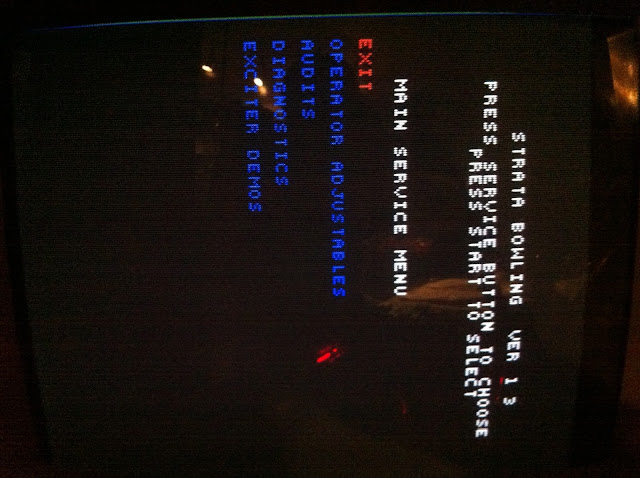 I wasn't too proud of the battery "solution" that I had come up with, so while I had the board back at the bench, I decided to make it a little bit nicer. I had this old PC-motherboard in the scrap pile. It had a battery of a different form factor, but still 3V... and it was placed in a battery holder. 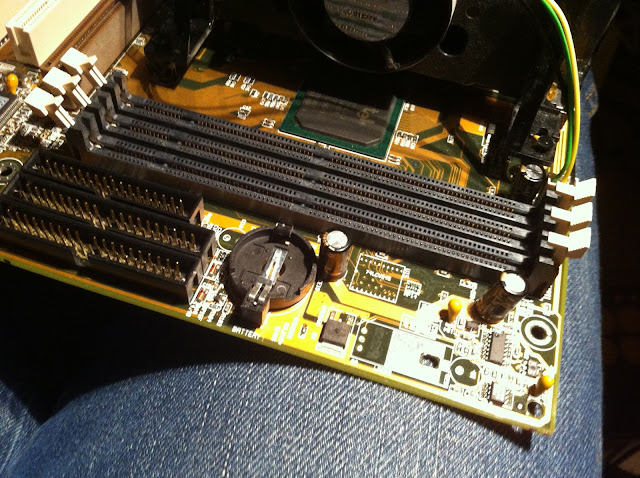 This type of batteries can be purchased in any bigger supermarket for about 10DKK (~$2) a piece, so that was a perfect solution. So desoldered the holder and attached a wire because of the different form factor 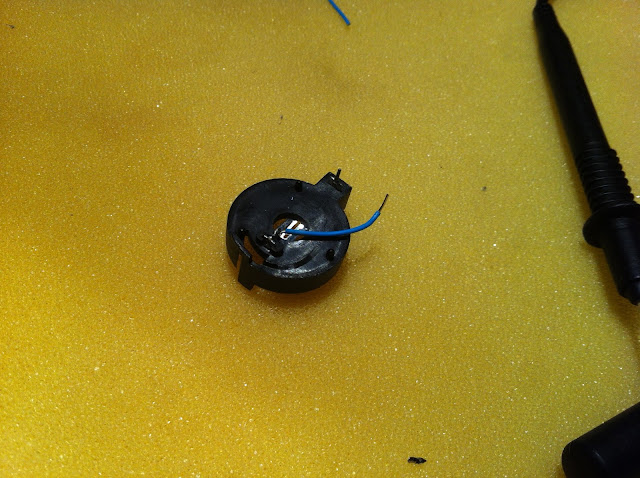 and soldered it onto the board 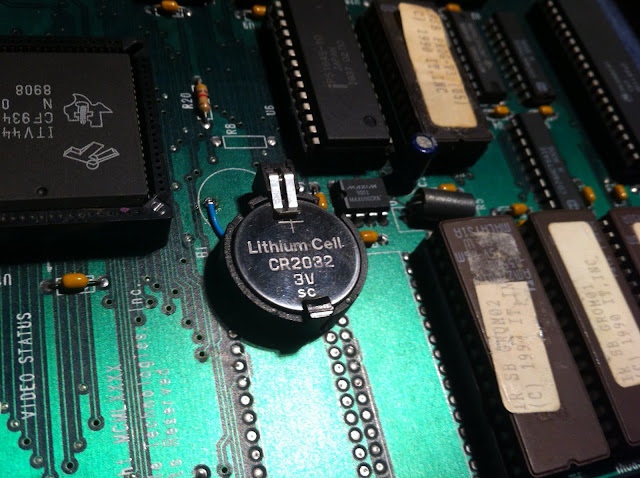 I can see that it works perfectly, as when I take out the battery, the game boots with a message that the battery is dead. But when it's installed, it saves the settings I've made in the service menu.

The last thing to get settled, was the issue with the blowing fuse. So I tried using one of the small again, and the board booted perfectly. However, when I tried to boot it again the next day, the fuse blow right away.
And THEN it struck me! I had been using fast (in danish: flink) fuses. These are designed to blow at the moment the current gets too high. Slow blow (in danish: træg) fuses however, can withstand a much higher current than what they are rated for, for a short period of time. Very close to the fuse are a couple of rather big electrolyte capacitors. When I booted the board with the "wired" fuse, these would get charged just fine, but when trying with the fast fuse, it would blow right away, because of the high current this charging generates. I couldn't find any documentation anywhere if this fuse should be fast or slow blow, but after seeing that the board runs just fine with a fast fuse once the caps are charged, I'm not in doubt.
So on my way to the arcade that day, I bought a 10 pack of slow blows (in the right form factor), as I didn't have any, and handed them over along with the PCB. About a week later, Chriss and Julian sent me this awesome video


The 2 jolly arcade owners speaks danish in the video, but to recap they're telling, that the game now seems to work just fine, but that they are missing a ball of the right size. Should you, good reader, know anything about what ball to use, plz leave a comment.

So this ended up being more of a piece of detective work and hardly any real repairing. But that's how it is some times, and I'm just happy that it works, and I'm really looking forward too trying this game out };-P