About a year ago, i managed to snap up a cheap defective bootleg Bobble Bobble that I fixed and installed the REDUX ROM set on. That works fantastic, but another exciting project is Lost Cave, that originally released on December 11, 2012. It's a very ambitious fan project made by the 2 good fellows Bisboch & Aladar and consists of 100 "new" levels for the original arcade game. "New" are in quotes, as it's actually the best levels from various ports, that have been backported to the original arcade platform. Along with that, it introduces a lot of new elements for example on the graphical side. The original release from 2012 only ran on original Taito hardware (and MAME), but when the authors discovered REDUX, they got inspired to try and do a bootleg-PCB version as well; and as of Lost Cave v1.2 (December 11, 2013) it also runs on bootleg boards (the kinds without a 68705; so the same criterion as running REDUX).

I downloaded the Lost Cave (bootleg) ROM set and installed it on my board, and it worked like a charm; jawsome game! };-P Now Lost Cave is a whole new game with new levels and stuff; the original levels are not present in the game anymore. So I started thinking about how I could find an easy way to run both Lost Cave and REDUX on my board, without having the fuzz of swapping the ROMs every time.

The first thing to notice is, that all the ROMs on the board are 27256 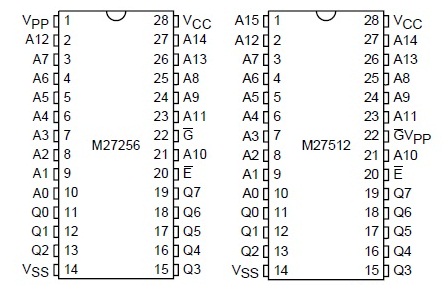 you'll find, that they are almost identical with the exception of pins 1 and 22. The 27512 uses pin 1 as the extra address pin and have pin 22 double as both Output Enable (in reading mode) and Programming Voltage (in programming mode). Now pin 22 we don't have to worry about, as the EPROM will only operate in reading mode on the board. But pin 1 will allow us to switch between the upper and the lower 256K bits of the EPROM. This scheme is often referred to as bank switching (at least when it's is done runtime, anyway), as you divide the address space of the ROMs into two separate banks that you can switch between.
Now to pull this through, I first had to identify the union set of all the ROMs that has to be swapped to go from straight bootleg to either REDUX or Lost Cave. Now the REDUX are marked with bow ties and the Lost Cave are marked with fezzes 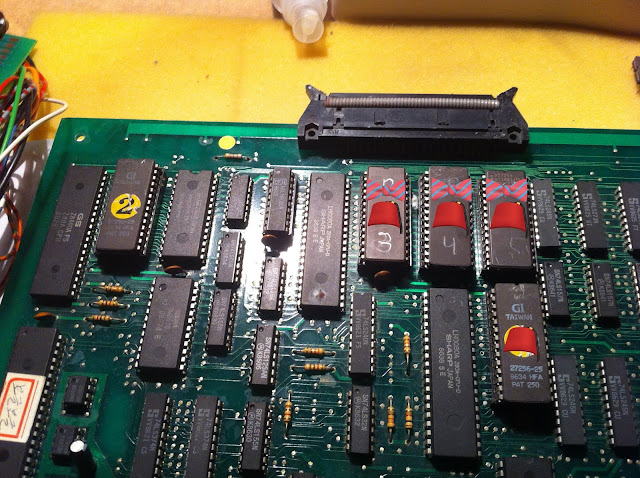 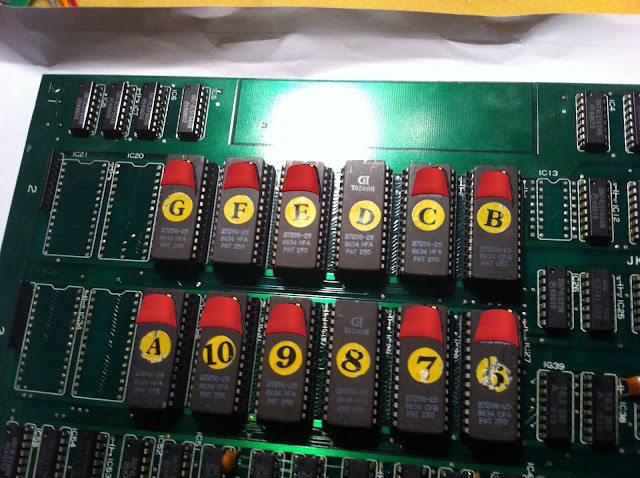 ...the union set is of cause just all the marked ROMs };-P. Please note, that on other bootlegs, these ROMs might have very different numbers/id's, so it's the position that's the important thing here.

Next I started doing the plumbing for the bank switching. First of all, I would need an ON-ON switch with +5V on one pole and GND on the other; the middle will then be the "bank switcher". I just happened to have a bag of tiny ON-ON switches stocked that fits into 3 successive holes on a DIL, so as bootlegs often has a lot of unused holes, I easily found some usable ones to clean up. 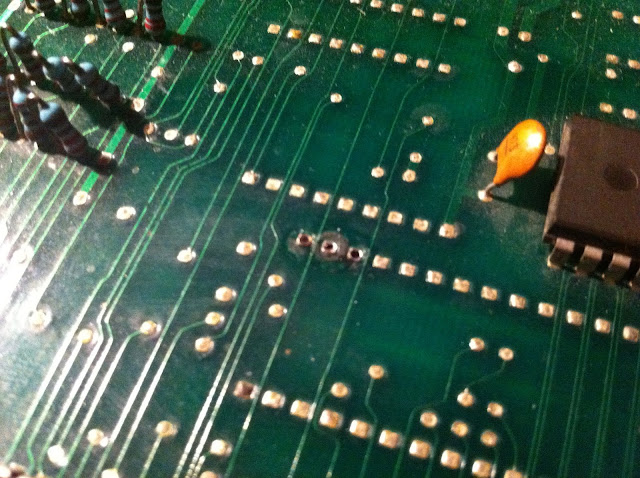 and installed the switch 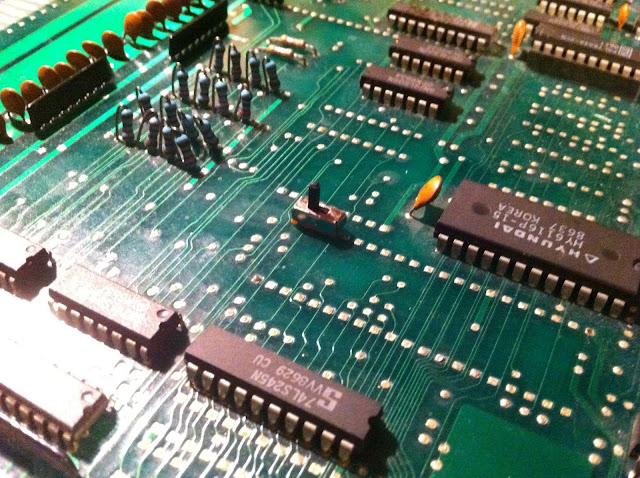 Next, the wires got soldered on on the solder side 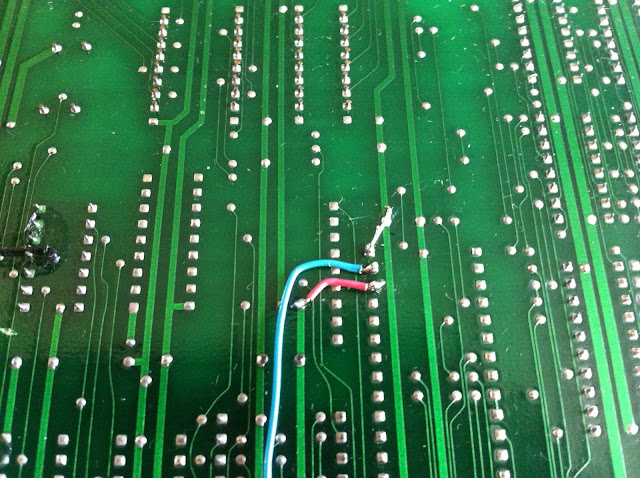 The red wire is +5V, the unisolated is GND, and the blue is the bank switch-wire.
Now on the main PCB, 3 of the 4 ROMs to be swapped (the 3 ones on a line), already had pin 1 tied to a GND-rail individually, so these connections had to be cut of course. 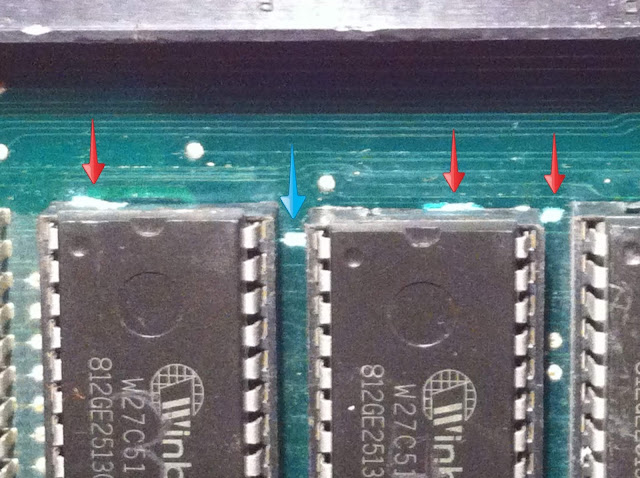 These are marked with 3 red arrows; I also accidentally (it was late at nite }:-S) cut the connection to pin 2 on the middle ROM (blue arrow). So that's why there is also a piece of red kynar to patch this up on the next pic showing how the pin 1's are connected to the bank switch-wire. 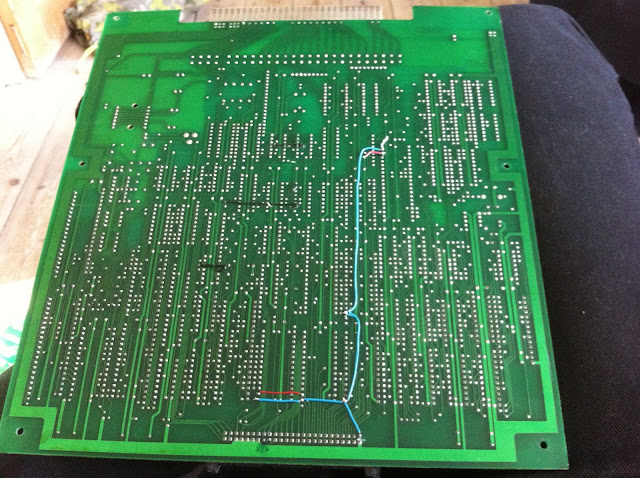 As you can see, the blue switch-wire ends at the ribbon cable connector 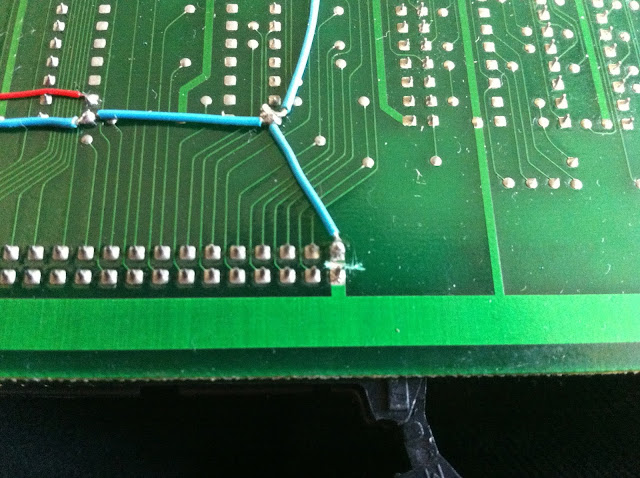 That's because the switch-signal needs to be passed on to the secondary board. And as I didn't want any extra wires (that would have to be desoldered every time the board is taken a part), I choose to hijack one of the many GND wires on the ribbon cable (notice the cut). Now that was all the plumbing needed on the primary board. The secondary board was actually easier. Here, all the pin 1's on the ROMs was already interconnected, with a GND-connection in one end, and a connection to a resistor array in the other end. So only 2 cuts on the component side needed to be made 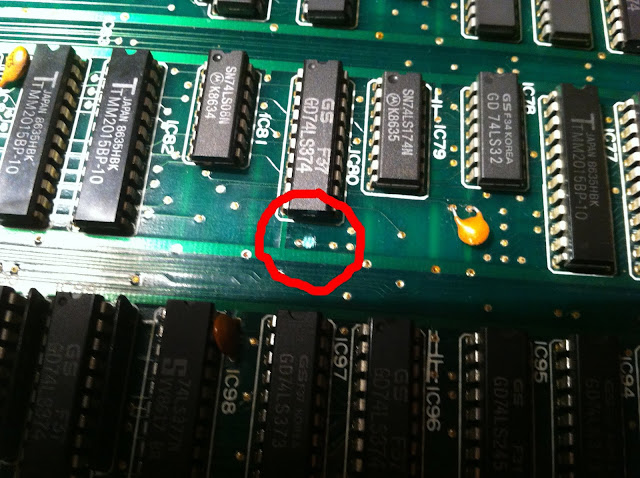 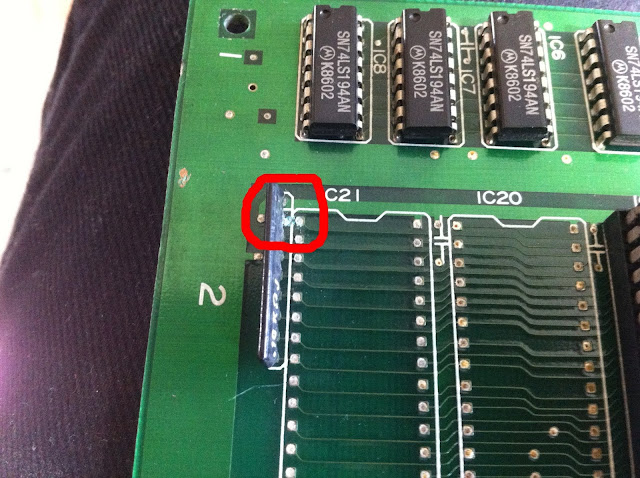 And then of cause, the connection to the hijacked ribbon pin had to be cut and connected 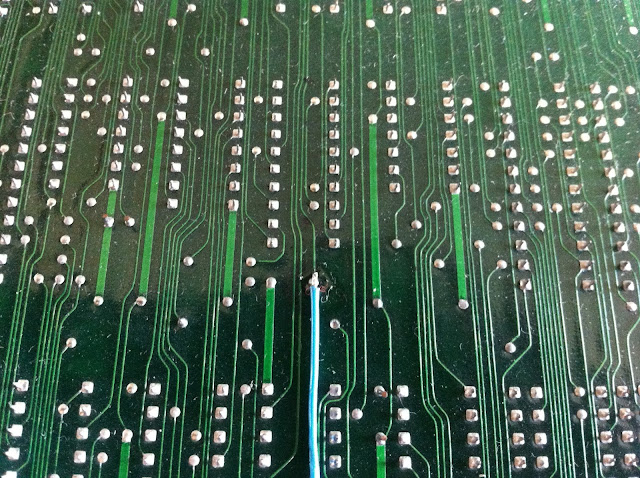 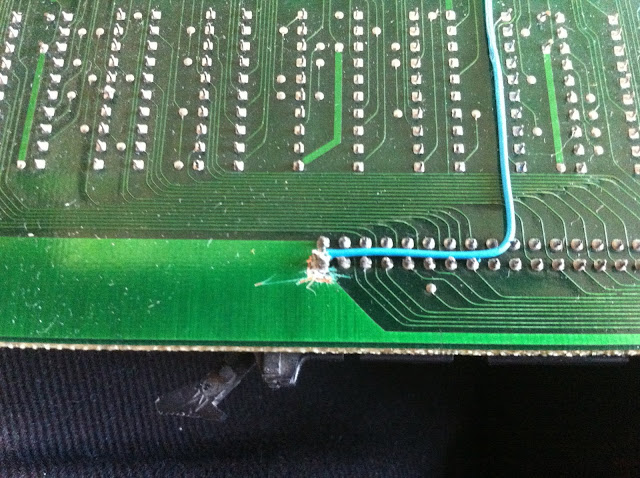 The last thing needed to pull this off, was the actual ROMs. Now as I'd dumped all the ROMs during the repair, I had a full set of REDUX ROM files for my board. Also, before I even started, I'd checked that Lost Cave v1.2 would actually run on my board, so I had a full set of files for that too. So it was only a matter of combining the two sets, for each ROM that needed to be swapped. This is easily done ie in a Windows cmd prompt with the command

for every pair of ROM files; of cause taking care, that the files from the same set were always first/last };-D

So I replaced all the 27256-ROMs to be swapped with the just programmed 27512-ROMs and fired up the board full of excitement };-P

As a last thing in this post, I wish to mention, that I've recently created a Facebook page, that'll make it a bit easier to follow the blog. Here I'll post every time I make a new blog post, but also make minor posts about progress of current projects etc. I welcome you to visit, and 'like' if you wish to be updated on the stuff I do.