Now this little bootleg of Taitos Super QIX had graphics issues. All the sprites had stripes through them; the same with some of the letters on the attract screen (maby they are made up of sprites too?!)

I started with the basics. Visual inspection, reseating ROMs...however when putting this 2732 back in place, I just got a solid blue screen 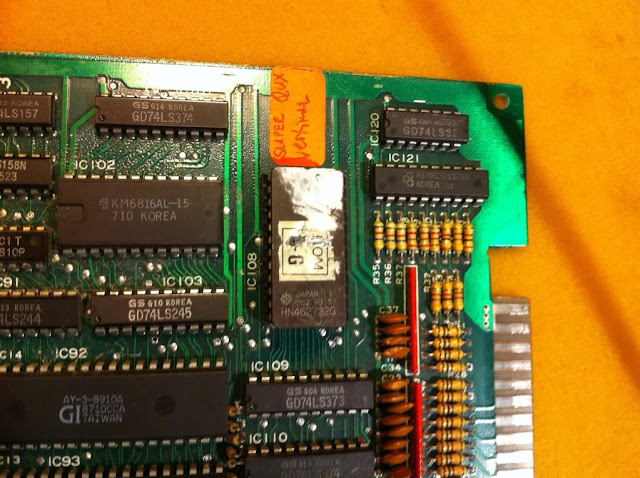 Tried popping out the ROM again. It was then I discovered, that the dumbass that had fitted the socket, had reversed it (notice, that GND and not Vcc goes to the upper right pin of the socket)! 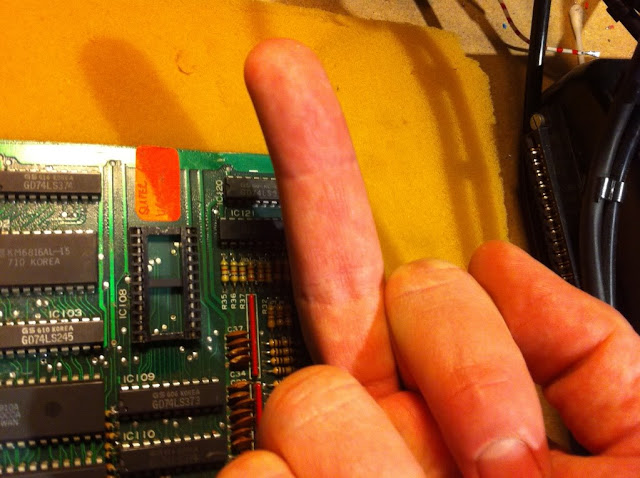 The result was, as I feared, that the ROM was now fried. When trying to read it in the Top2005+, I got a "No chip inserted!" error. Ofcause I had forgotten to dump the ROM before I reinserted it and flipped the switch, so basicly, if I couldn't find the right image somewhere, I was frakked. So I went hunting the net for ROM sets. By googling a bit, I realized that my board was a special bootleg using a MCU with external ROM; the other ones have an MCU with inernal ROM. So the image I was after was called sq07.108. This image exsists in (at least) 3 version floating around the net. Tried burning one of them, but my Top2005+ would not burn 2732's with Vpp=21V. So I tried programming some 2764's with doubled image, and then afterwards moved some pins around to make it fit the 2732 pinout. None of them worked!
I was then so tired of the board, that I sentenced it to the scrap pile!

Months went by with other reps, but everytime I had my hands on the board while going through the pile, I thought of how sad it was to scrap such a nice board. So a couple of weeks ago I pardoned it. It had suffered a little bit durings its stay in the pile; the volume pot had been harvested for a rep (that I gave up on, as the game was TOO damaged, and was a football game). Besides that, it looked just fine.

Now I was pretty sure, that all the ROM sets I'd found wouldn't work, as it was the wrong images for my game. So I sent out a cry for help by posting threads, on different rep forums I usally visit, asking if anyone had a bootleg similar to mine.
Mainwhile I also had the thought, that maby the board (for some reason) would only work with a true 2732, and not a modified 2764. A couple of months earlier I had been so lucky, that an old friend (Jarl) had decided to donate me his old ISA BUS based EPROM programmer that actually IS capable of programming EPROMs with Vpp=21V. So tried one of the three images I had

With this EPROM the board booted up the self test and passed all tests and then went all black screen when the game should start. Now that was certainly a change for the better };-P So erased the EPROM again and tried one of the other images, and BINGO! I was back at square-one with a game that had sprite errors; Totally awesome!

Now sprite errors like these are often caused by bad RAM, so started poking the data pins on the different RAMs on the board. This board uses 4bit DRAM for sprites and backgrounds and they work in pairs to make up a whole byte. I had never encountered a board using DRAM before, so I was not too sure what to look for, as DRAM also has this thing about refresh. However, when poking this little fellow 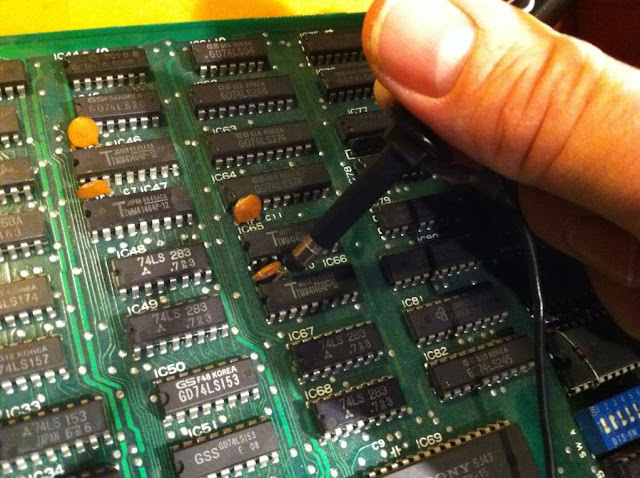 I saw something that didn't look at all healthy; refresh or not 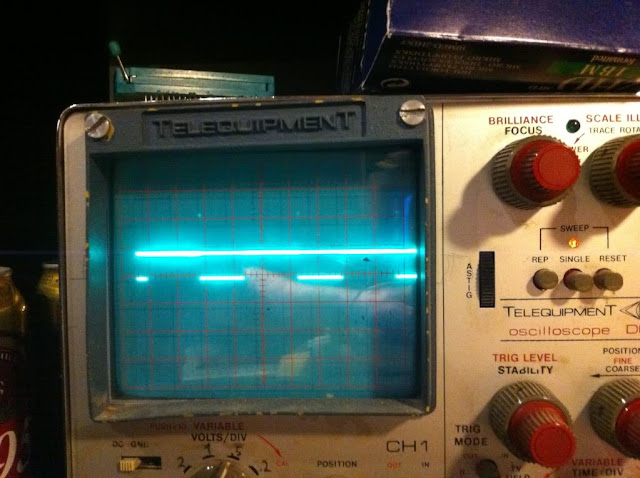 And when looking at its partner 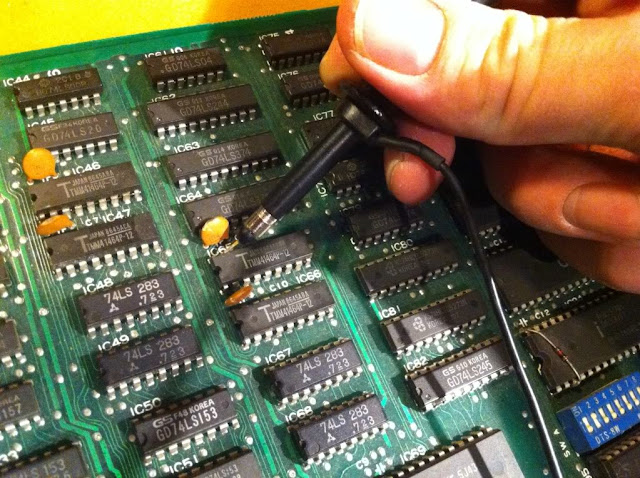 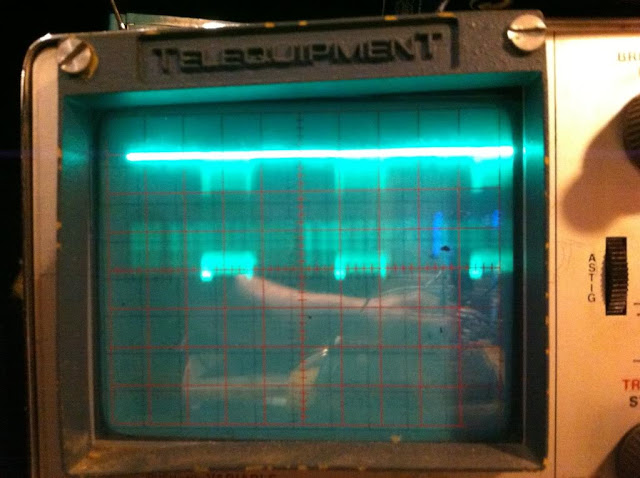 I was convinced, that something was very wrong with the other DRAM! However, as my Top2005+ only tests SRAM, I had no means of testing it. So I decided on desoldering both ICs in the pair and fit sockets. 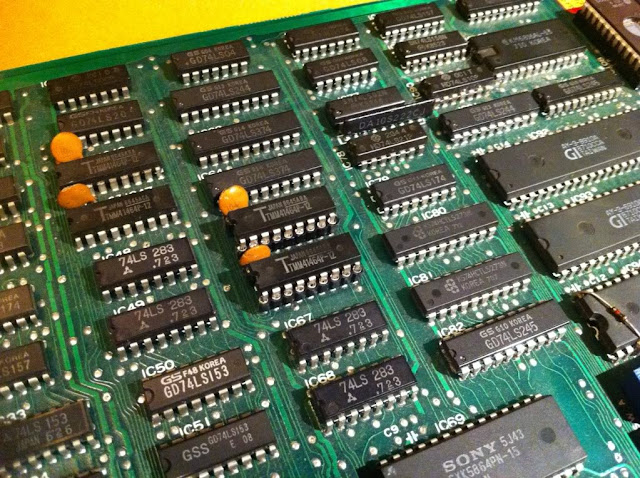 By trying diffenrent combinations of inserting 1 or 2 ICs in the different sockets, I was pretty sure, that the one with the fainted text was knackered. I went through he scrap pile, but didn't find any 41464...however I found this old PC mother board with alot of these 41256s 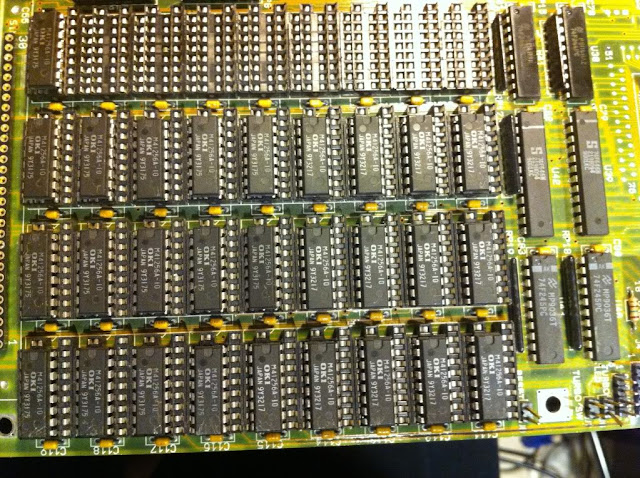 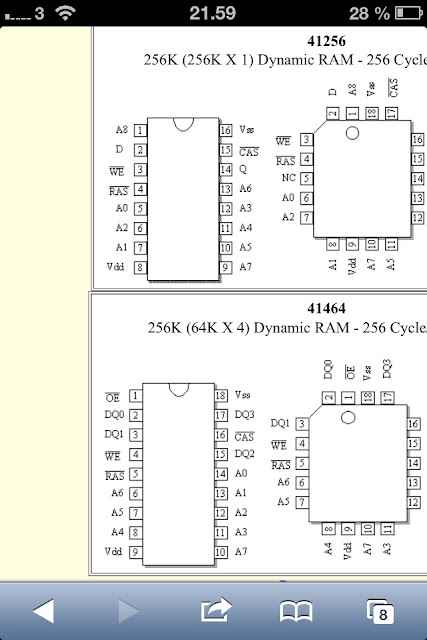 The 41256 has separate D and Q, so they would have to be connected 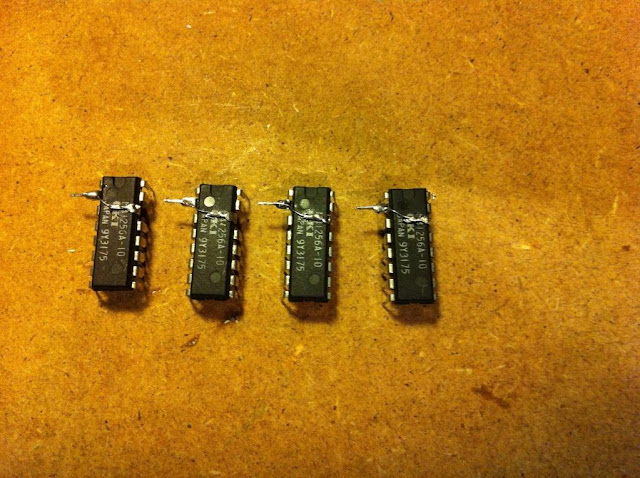 Next we stack'em and connect all the address and control pins 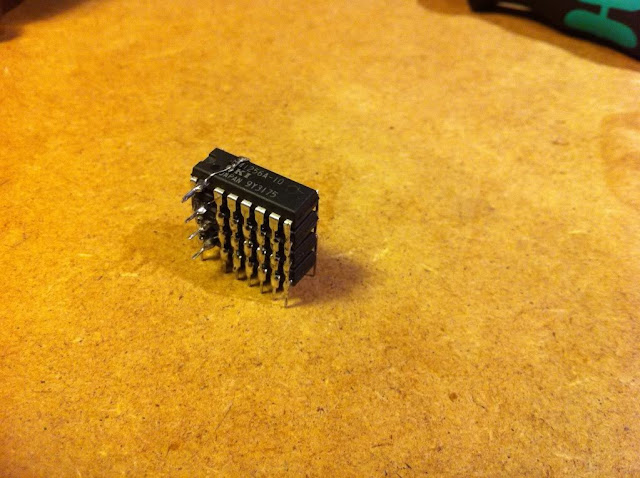 Now as seen on the pinsouts above, the placement of the addresspins are not compatible, so I prepared an old socket with solder blobs 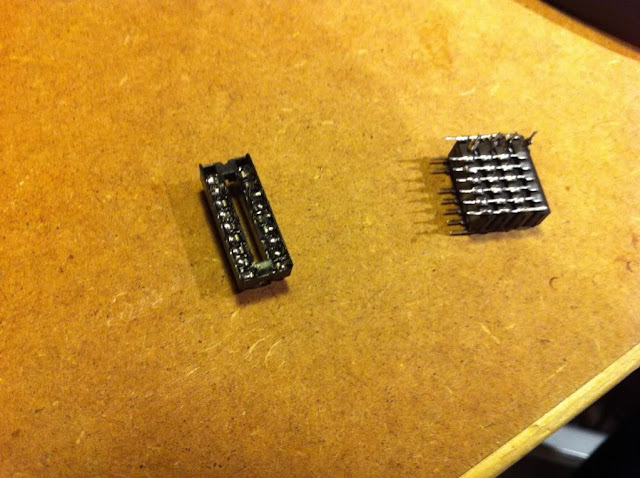 and soldered the pins that where in the right place on; then routed the other pins using kynar; the only pins not present on the 41256's was the /OE (output enable), so I just left it unconnected 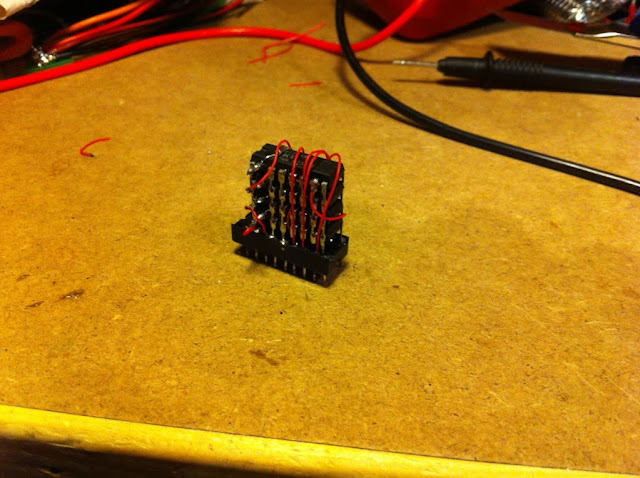 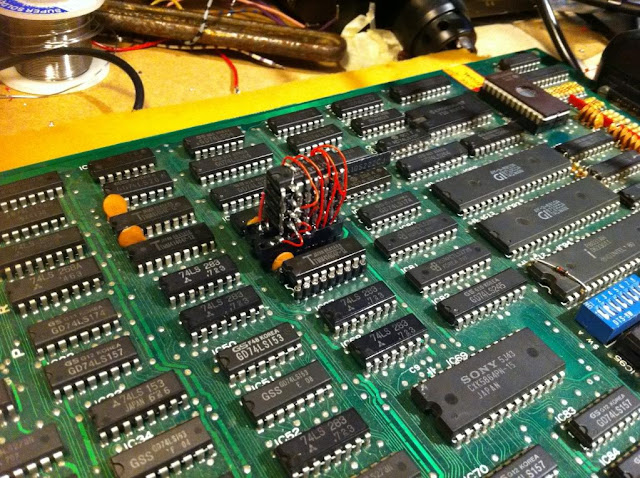 Even though it worked, I did order some real 41464's on evilBay, as the MacGyver construction is not very durable };-D But it was great fun trying and it was cool to see that only the one DRAM was dead.

Next problem to address was no sound. So started by refitting the volume pot, but still no sound. The output of the amp 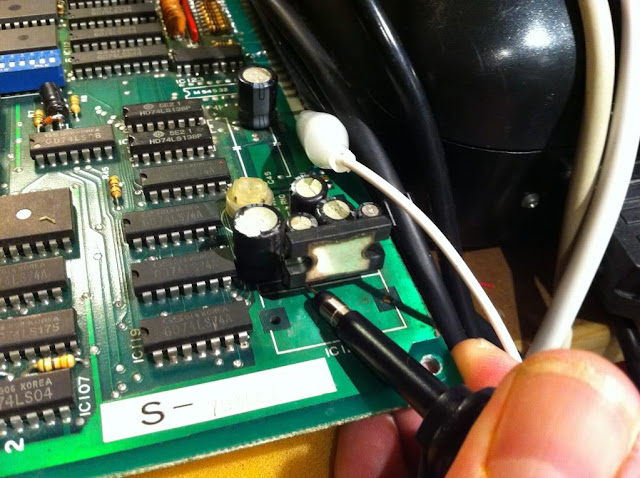 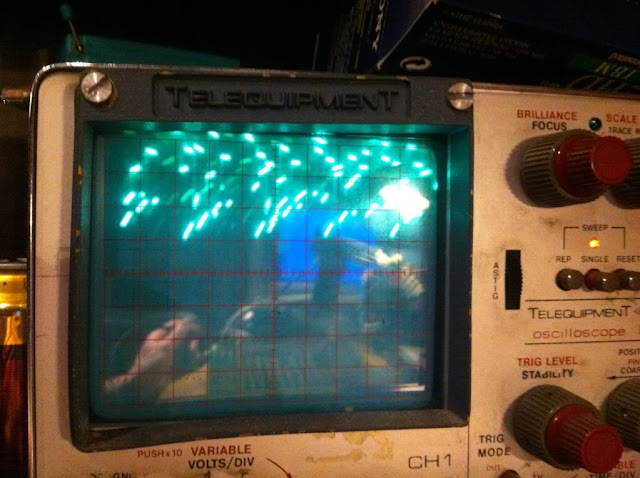 But I traced the signal to the SPEAKER- pin at the edge connector; hmm precisely the same 'problem' as with this board; maby it's time to add a switch on the SuperGun? But I decided to switch the signals onboard this time again 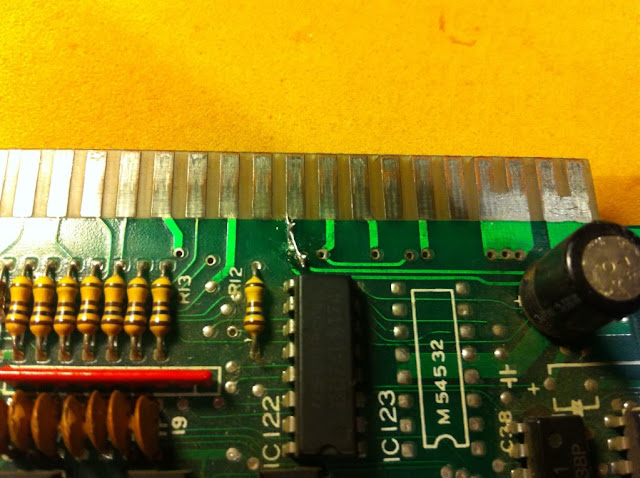 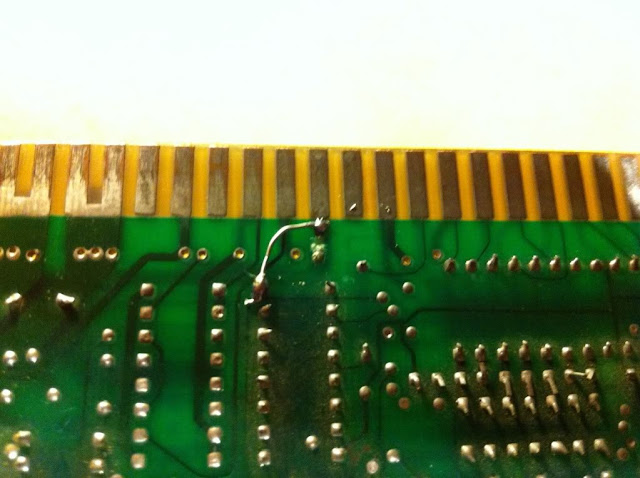 and the sound was now perfect.

Yesterday the real 41464's arrived from the US 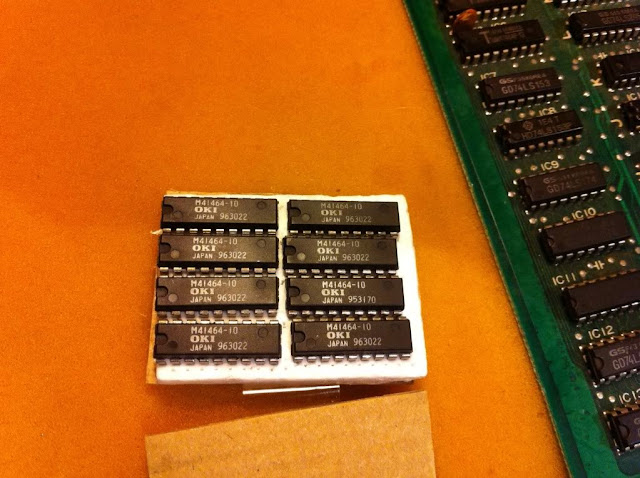 and the board still works fine with one of them 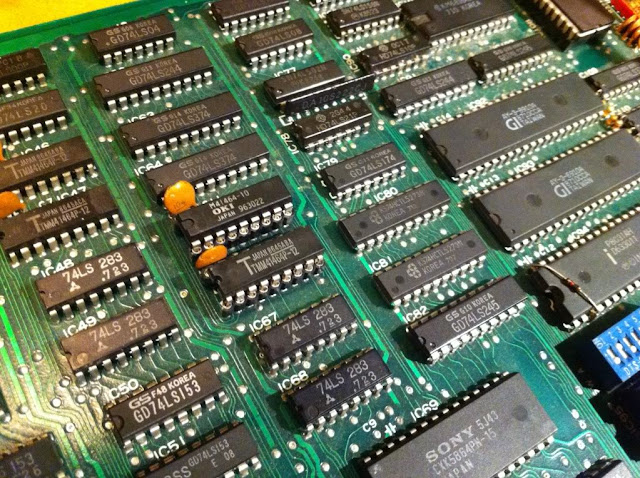 Addendum: My cry for help on the different forums payed off! I got a pm from member Belike on Dragon's Lair Fans, that he had an untested bootleg SuperQIX (also with an MCU with external ROM) that he didn't mind parting with for small money. A couple of days ago it arrived. I haven't had time to test it, as the pinout is not JAMMA, but I did desolder and dump the ROM, and it has precisely the same CRC32 as the one from MAME I'm using in my own SuperQIX right now };-P
Posted by Elgen at 2/13/2013 12:59:00 pm