I got this board about two weeks ago when I traded an original 1942 for 4 defective bootlegs and some cash. I was told that the game was ok, but had problems with the controller inputs. When I got it, it looked like this 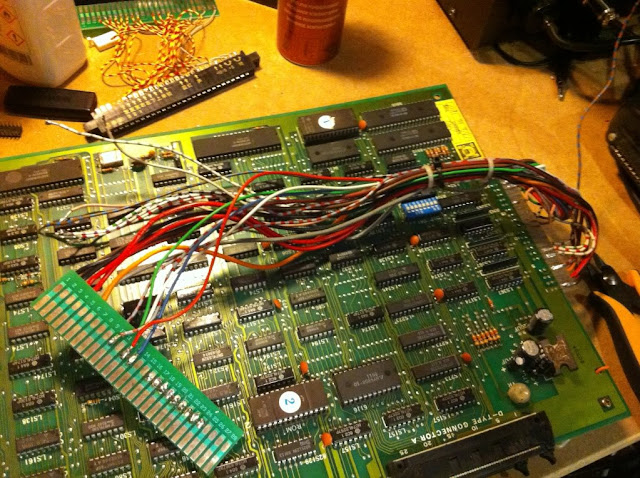 I'm pretty sure that there exsists a very special and particularly gruesome place in Hell for people who solder their adaptor wires directly onto the PCBs connector };-S It is just so cumbersome to remove them again... But after about 30min of hard labour, a good 20cm of solder wig, and a light scrub with rubbing alcohol and toothbrush, 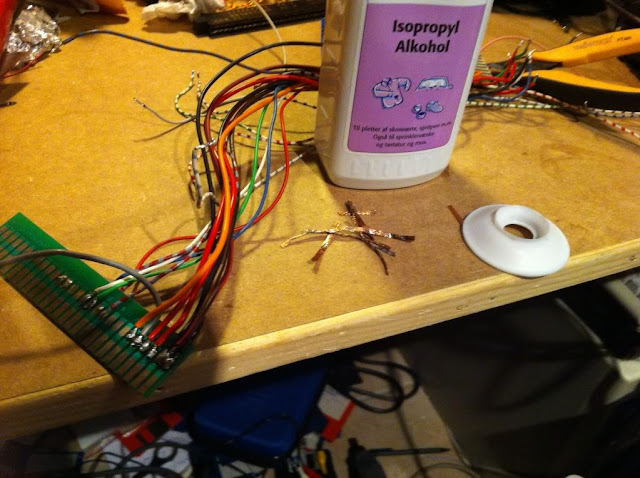 I had a result I was pretty satisfied with. 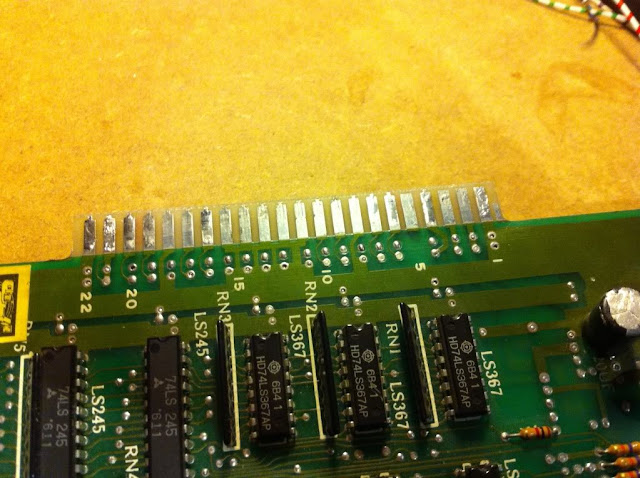 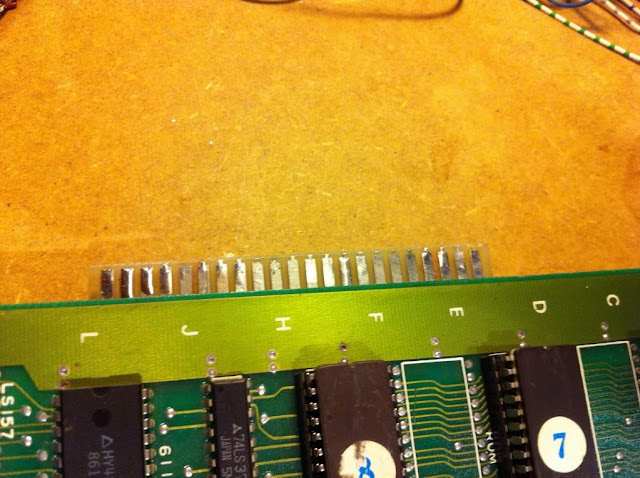 Now, as this board has a 44pins pinout, it couldn't be Capcom Classic (like the original) for sure, so I grapped a 44 pin edge connector and a JAMMA fingerboard from the pile, and went hunting the net for the pinout. And at mikesarcade.com I found something that looked like it was the right one (notice the 5 consecutive GND-pins in both the pinout over at mike's and on the pic of the component side above). Even though I was about 99% sure it was the correct pinout, I built the adaptor in steps with supply + video, sound, and then controls, with testing in between each step. However after I added the controls, the sound was gone. 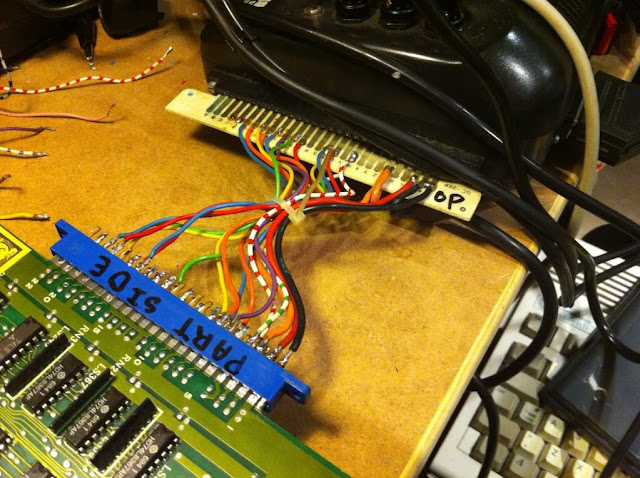 Hmmm, checked all the connections again and tried to wiggle the board i bit while it was running. I managed to get sound momentarily. Okay, so my adaptor was fine...the board had just developed a sound issue while I was fiddling with it.
Now on to the controls, that I've been told was screwed. First thing I noticed was, that the game started right after I hit the coin button. Next the plane used up all the rolls, then flew to the top of the screen shooting constantly.

The only control function responding, was left on the joystick. I started with the start button. First I found it at the edge connector, and a continuity tester confirmed, that it was tied low. Luckily I was able to trace it backward using only my naked eye. First thing it met, was this array of pull-ups. 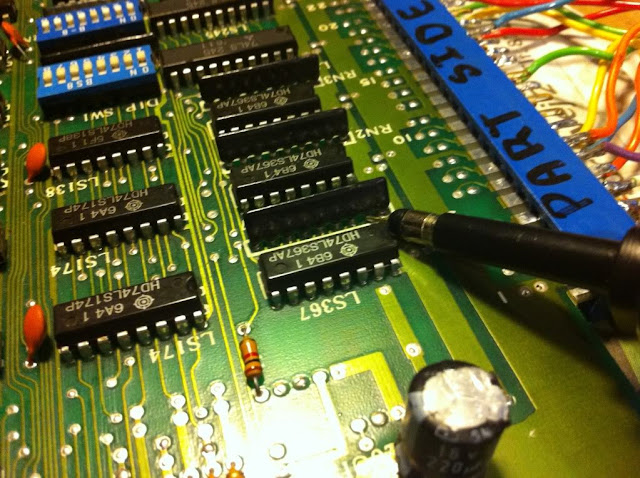 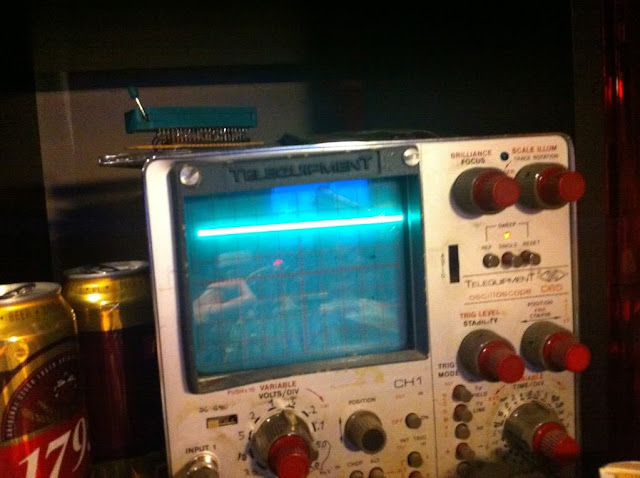 But the next couple of them 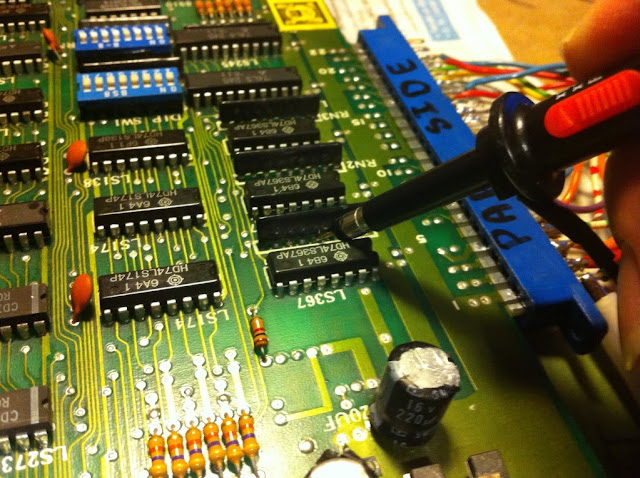 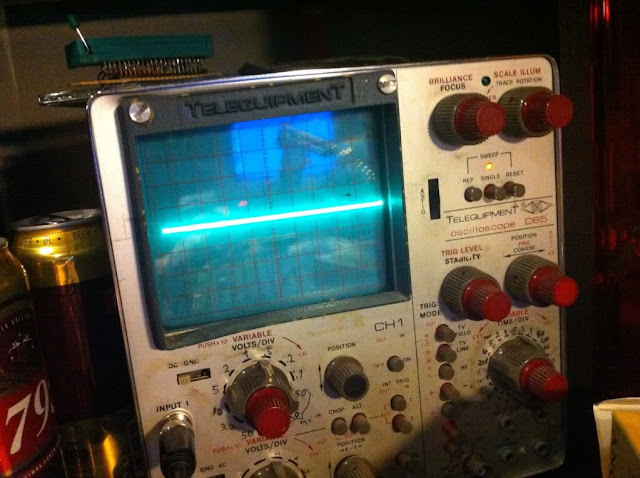 However after desoldering, the array seemed just fine, when tested with the Ohm-meter 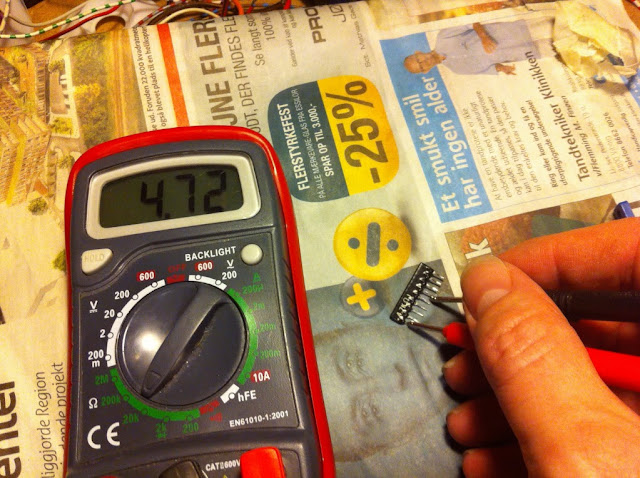 And (not all the surprised) I found that the pins were still tied low on the board. So the array was going to be soldered back on the board, and I went looking upstream. The next thing the line met, was the 367 just below in the picture above, so out it went 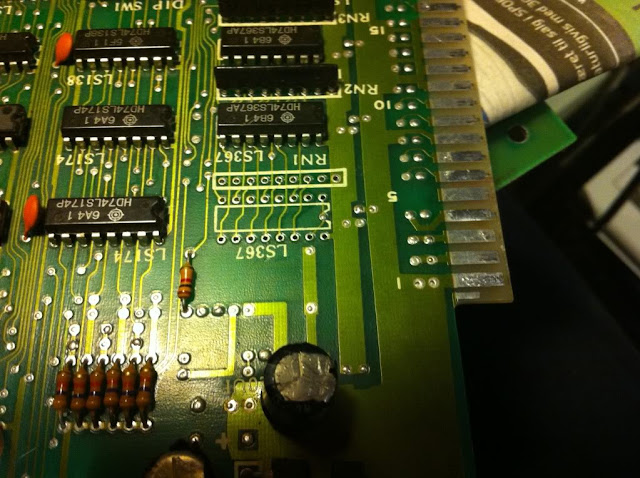 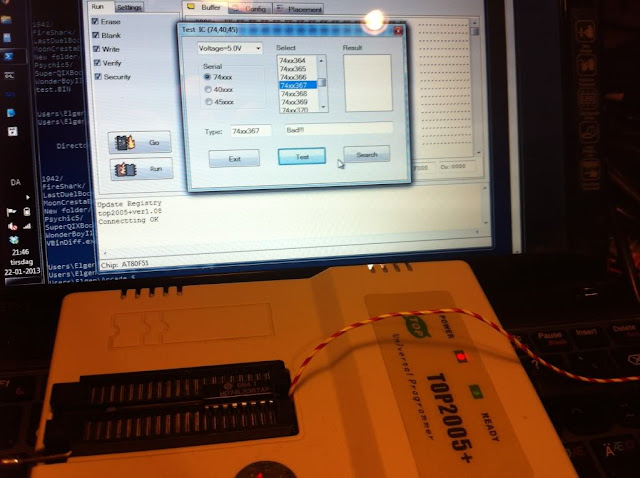 So fitted a socket and found a good 367 from a scrap board. 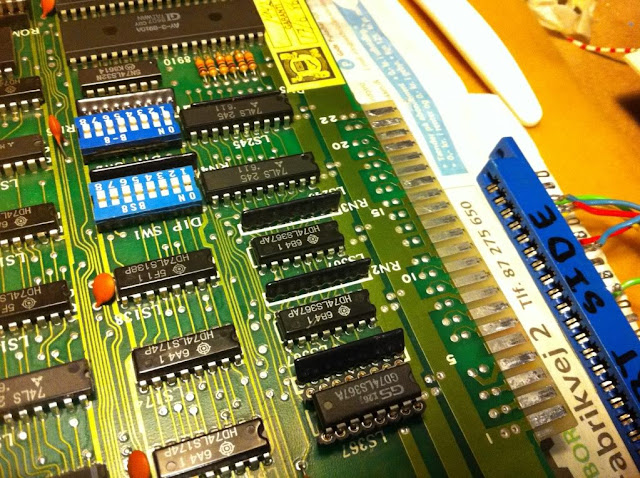 But when I then powered up the board, all I got was this screen of garble. WTF!!! };-S 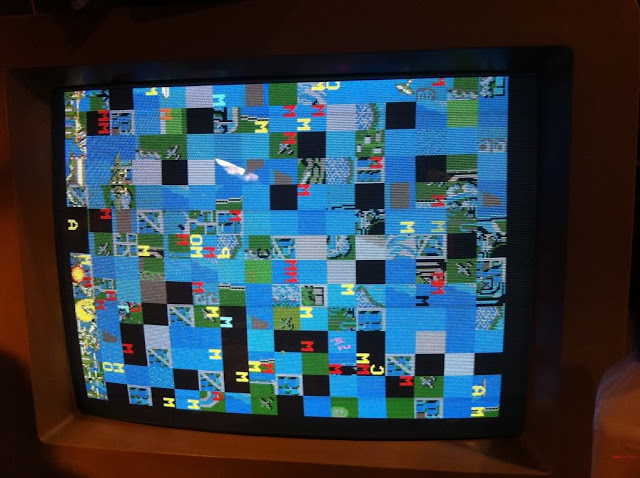 Tried turning power off and on a couple of times, and even tried putting the old 367 back, but still same-same... Well, back to basics: Did visual inspection of parts and solder side for both PCBs. Reseated all socketed ICs and dumped all ROMs 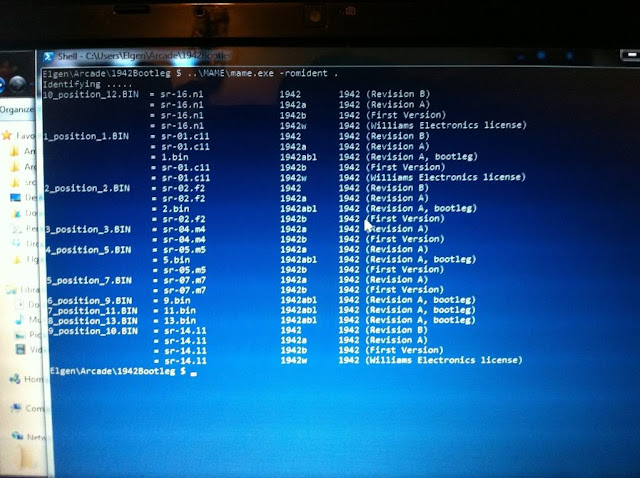 All seemed correct there as well. Desided to hit the sack and sleep on it, as I was pretty tired.
When I got back to the board the next day, the first thing I noticed was this 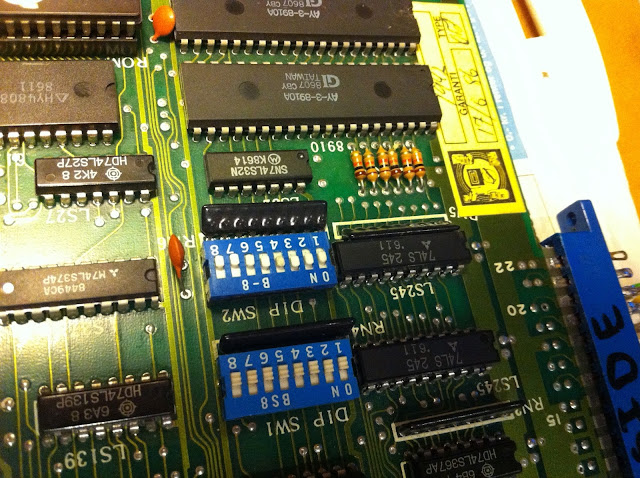 Not all the dip switches on SW2 was fully off! I set them all off, and the game booted just like it had done before };-P After I had a look at the dip settings, it was obvious, that switch 1 on SW2 must have been on causing the whole game to freeze. Well lesson learned: If something really stange suddenly happens to your board, check the dips first };-P
Now, on with the REAL repair };-P The start button was now functional, so the game didn't start right upon being coined up anymore. However, the plane still used up all the rolls and flew to the top of the screen when starting the game. So traced the loop button back to a resistor array and a 367 just like with the start button. This time I started by desoldering the 367 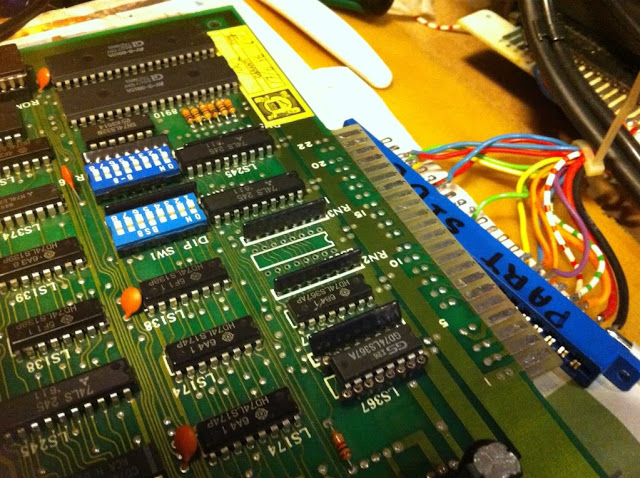 and it tested as BAD!!! in the Top. So a socket and a new one from scrap was fitted 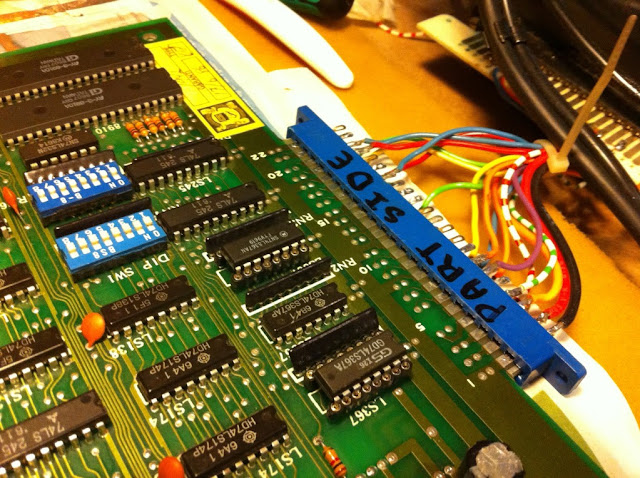 Now the game played perfectly, except for the missing sound, that is.
Missing sound can be caused by many things, but I usually start by checking the amp. This can be done by maxing the volume-pot and running your finger over the pins of the amp. If you hear a hissing sound, the amp is not totally dead. Here, there was hissing. As I had just done a Wonder Boy 3 Monster Lair Bootleg, that uses the same amp, I had the pinout right at hand. So poked the input with the scope, and saw a total flatline. Next I found the pinout of the two AY-3-8910 sound chips, and had a look at the 6 outputs (3 each) with the scope; again dead silent. Then started checking the datapins sitting on the bus between the two sound chips and the sound CPU (a Z80, just like the main CPU). AHA! data pin 3 was always low. 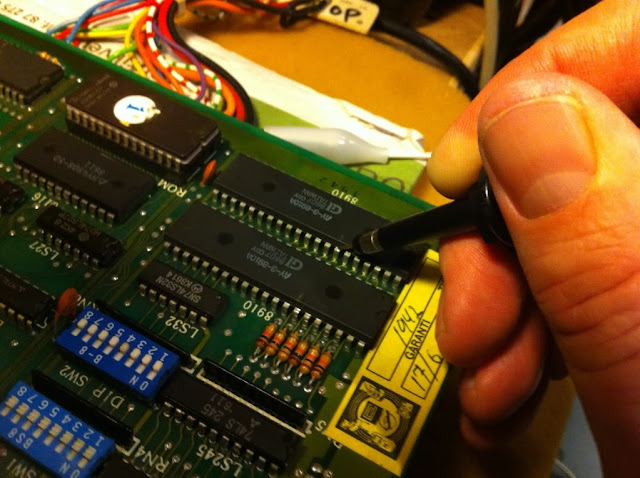 I was pretty confident (maby because that had just been the case with the control lines), that whatever was pulling the line low, had to one of the ICs on the data bus. So first I removed the ROM; easy as it was already socketed. Still stuck low! Next I suspected these two 374s 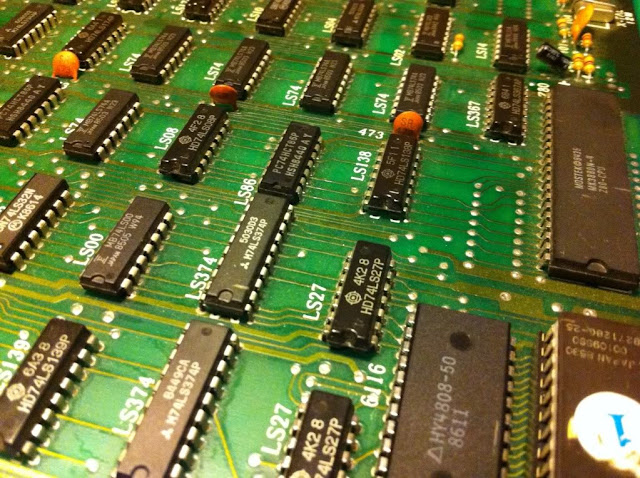 So they was desoldered and sockets fitted. But they checked out fine in the Top and the line was still low. 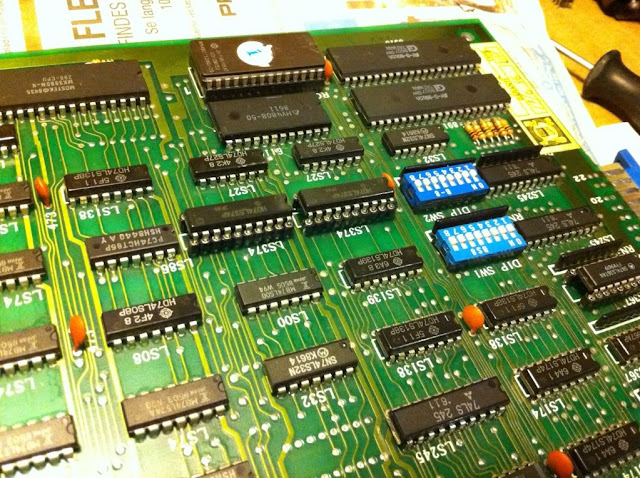 In the maintime, I had found that the sound circuit is identical to the one on the original. So by inspecting the schematics (page 3) found at jammacade.net, I could see, that the only ICs left on the bus, was the CPU, the RAM, and the 2 sound chips. Now, if the CPU was knackered, it had to be desoldered anyway; if not I could solder in a socket and have a great chance to try out my new toy, The Fluke9010A };-P So desoldered the CPU and fitted a socket instead. 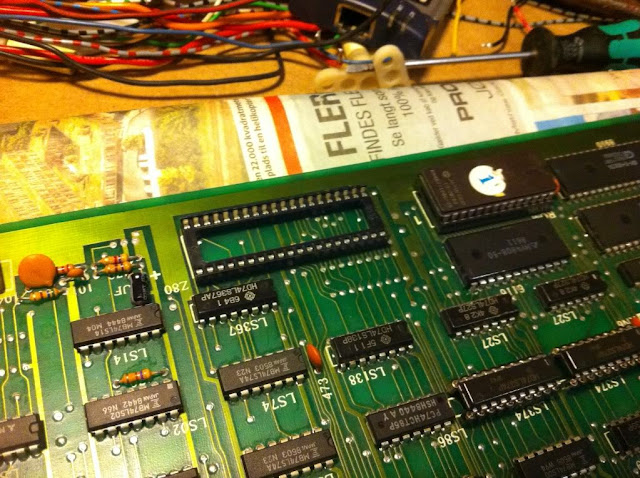 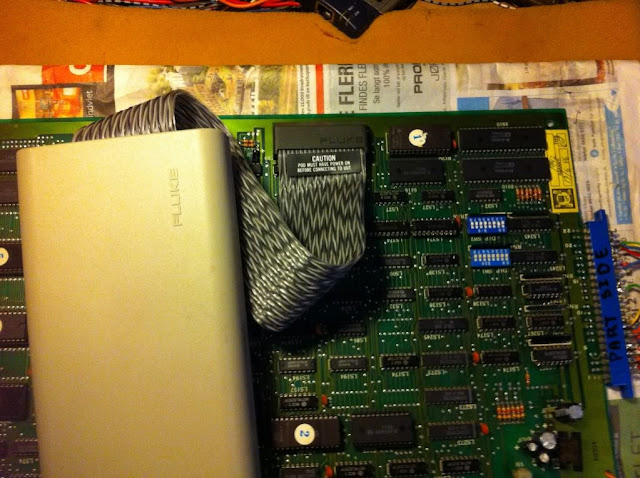 The Fluke showed just what I'd discovered myself 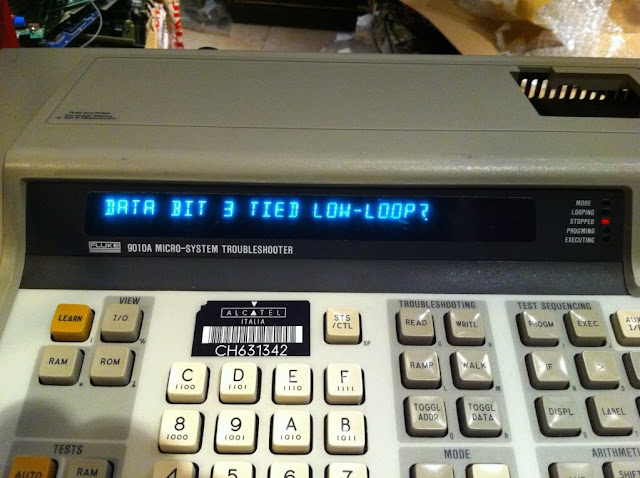 So the CPU was innocent. Ofcause, I was not able to do any of the other tests until I'd solved the problem with the stuck data line. The only things left on the bus was the RAM and sound chips. However, before desoldering any of them, I desided to visually inspect the circuit lines of the bus just one last time. Then I found this... 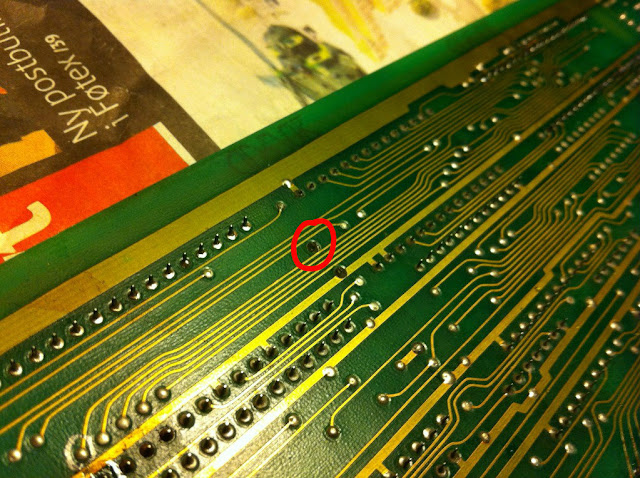 This grounded soldering was very close to the stuck line, and when looking through the magnifying glass, I could see that it had taken a little hit at some point. So I gently made a cut with a Stanley knife to separate the soldering from the line... 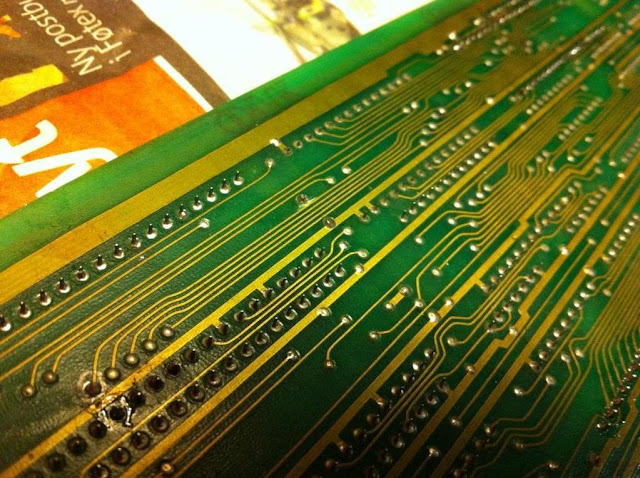 And when I booted the game, I had sound again, also with the CPU back in place. };-P
But as I had the Fluke powered up, I did the BUS test 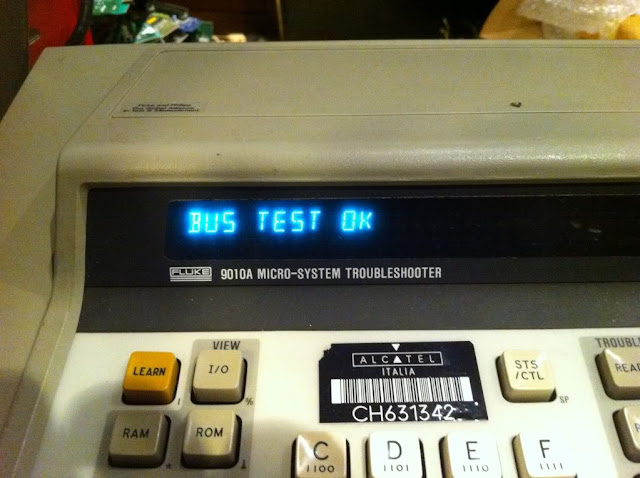 Found the RAM-space via the MAME source 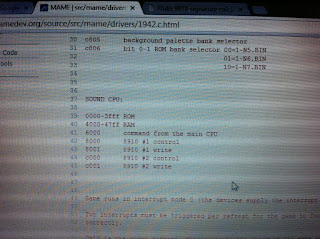 and did the two RAM tests (short and long...beware, the long one takes very long time)

I find that the Fluke is nice and easy to work with, and that it has a lot more potential than what I've done with it here...I'm so very happy with it };-P