All I used for this easy 'rep' was

I got this board as a part of the trade for this bootleg 1942 that I'd just recently fixed. I was told that the board booted and coined up, but when pressing start, it would freeze. The pinout (2 x 28) was a bit strange; not like anything I'd seen before (certainly not Capcom Classic)

Just as described, that game booted up just fine

and also coined up 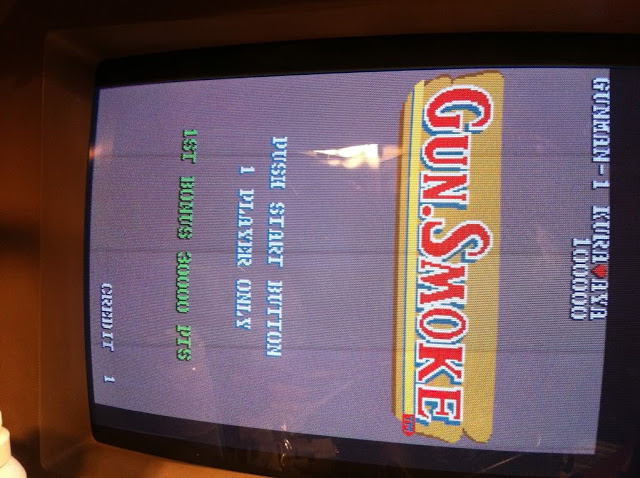 But when pressing start I got this screen 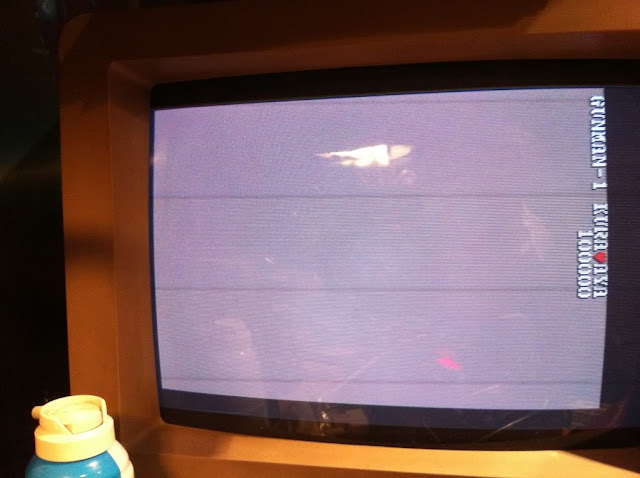 for a second or two before the game rebooted (the watchdog jumped up bit the main Z80 in the butt };-P). The same thing also happend when the game ran in attract mode and was to show the in-game sequence.
So I started with the basics: Visual inspection, dumping ROMs and reseating all socketed ICs. During this, I quickly found this area interesting 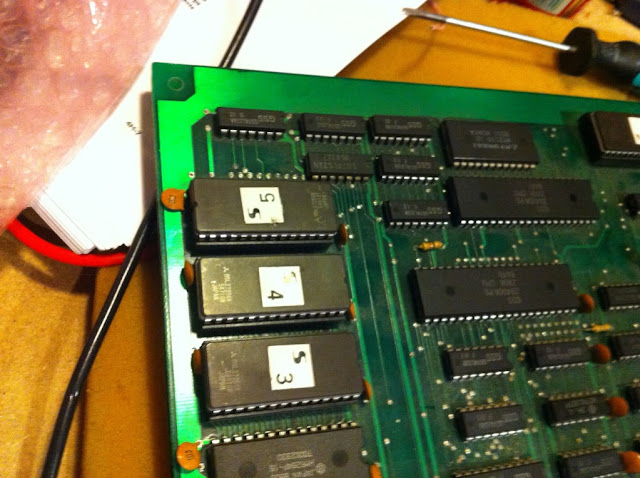 Somethig didn't look right; ROMs no 3 and 4 facing one way, while 5 was facing the other. When I pulled no 5, it was obvious by looking at the circuit lines, that it had been inserted the wrong way. Often this causes the ROM to get fried, as they are very sensitive to getting polarity reversed. So I turned it around, crossed my fingers, and got this 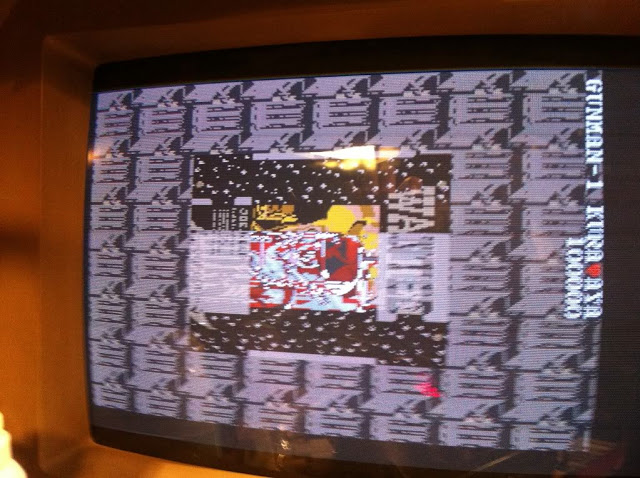 Even though the screen look garbled, this was the intro sequence for sure, and after that the actual game also ran...SWEET! };-P (no sound though).

I was finish with basics on the main board, so turned to the graphics board. Here I found this 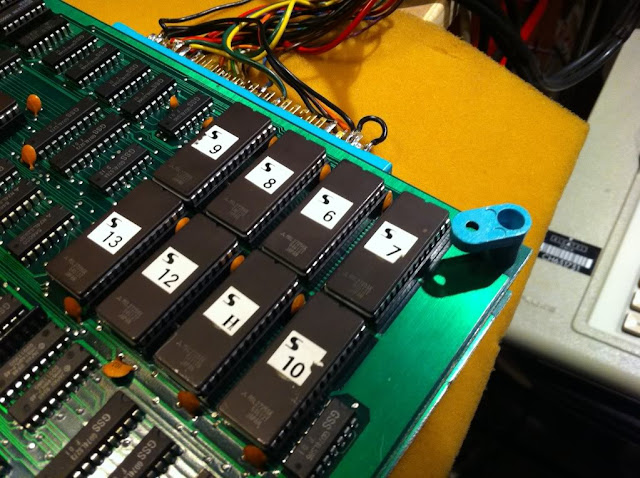 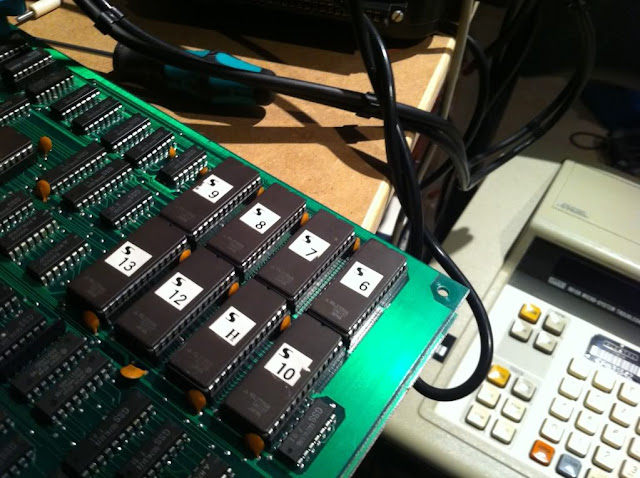 and now had a garble-free intro sequence

The game itself played fine, but the cowboy was only able to shoot forward and left. A quick look at the adaptor, and I saw, that only two buttons were wired on the JAMMA fingerboard. Now I couldn't find that strange pinout anywhere on the net, so I just tried poking a grounded wire at the different unused pins. And on pin 20 on the parts side 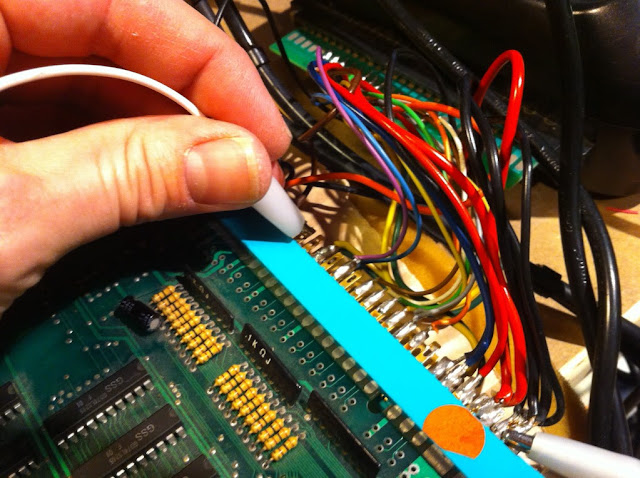 I hit the jackpot 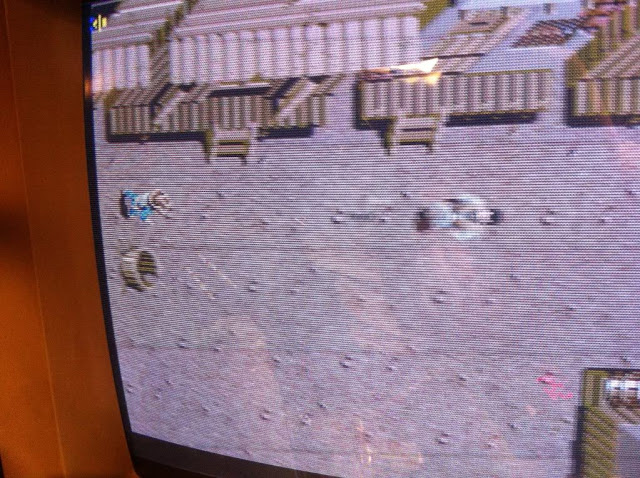 So soldered an extra wire (the white'n'red one) on the adaptor 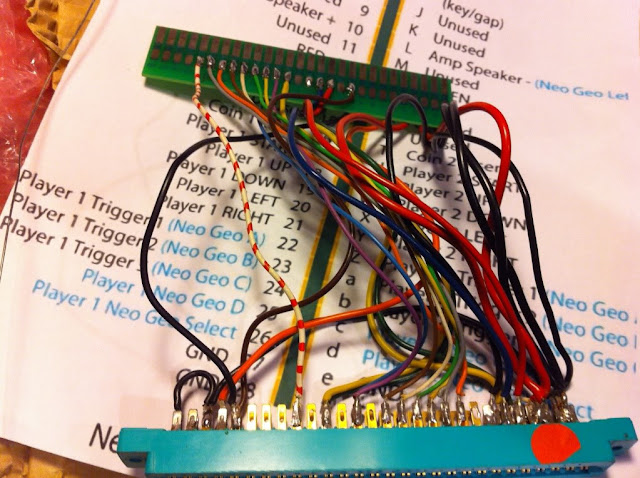 The last thing I needed for this to be perfect, was sound. There was already wires from two pins on the edge connector to SPEAKER + and - on the fingerboard. So from previous repairs, I know that it's smart to try and switch the wires (when working with a SuperGun and not a cab with a speaker) before trying anything else. And because we have an adaptor in play, luckily that's quite easy. And, PRESTO! the sweet sound of gunfire filled the room };-P
The game now plays perfectly, and I ended up with a pinout looking like this 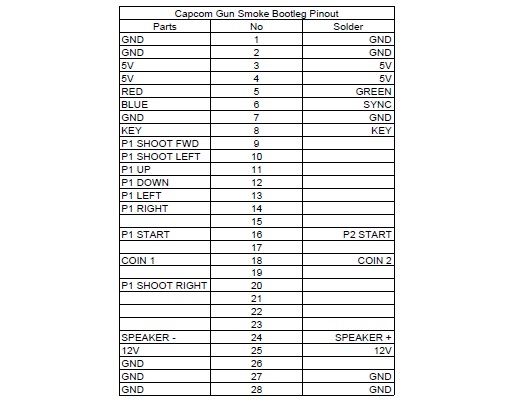