My friends often tell my that I'm often lucky to stumble upon cool stuff that other people have trashed. And, hmmm, well maybe I actually am };-P.

This day I was out walking with my daugther (age 8years) and I had my youngest son (age 1½years) in the pram. Suddenly in the corner of my eye I saw the well known Commodore C= logo at the other side of the street. I rushed to see what it was; a lot with a C128, C1901 monitor, and some smaller stuff. As it was raining a bit, I didn't get a close look at it, just stuffed the things under the pram and took the monitor in hand. Steering the pram with one hand, holding the monitor in the other, I began the trip home.
When I got home, I had a closer look at my loot. 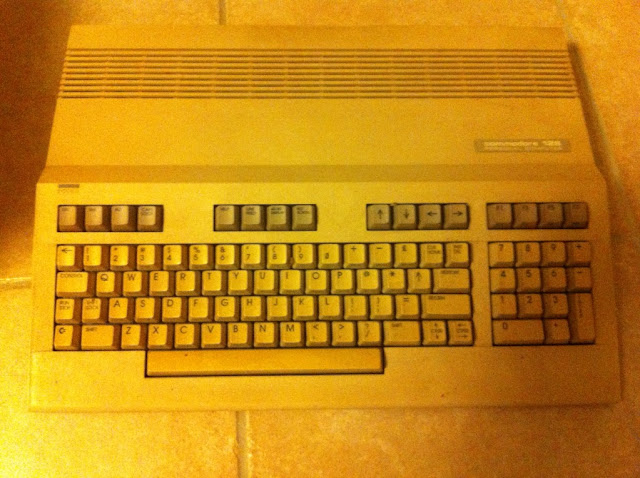 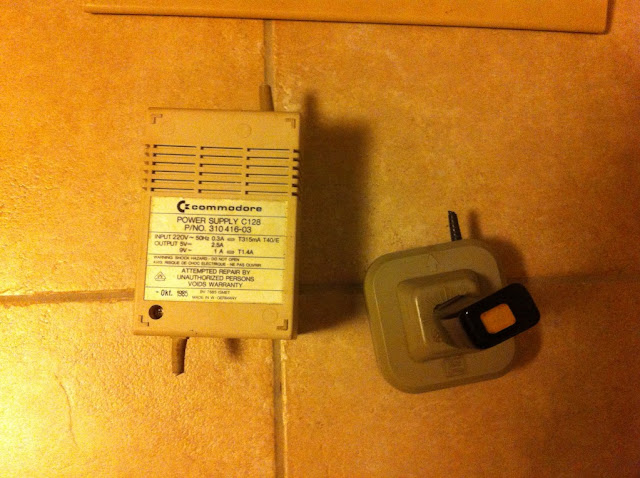 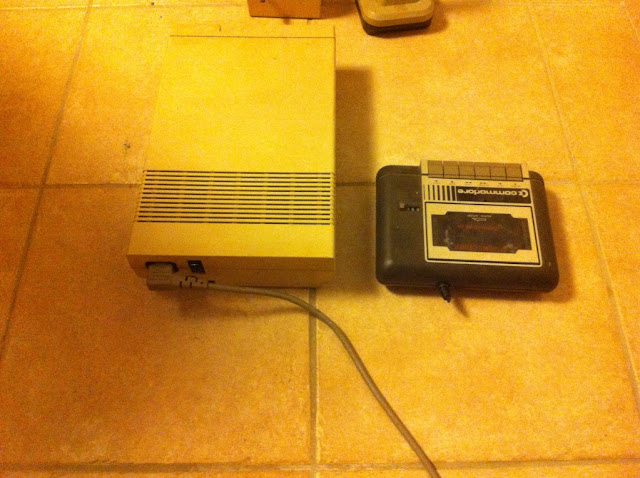 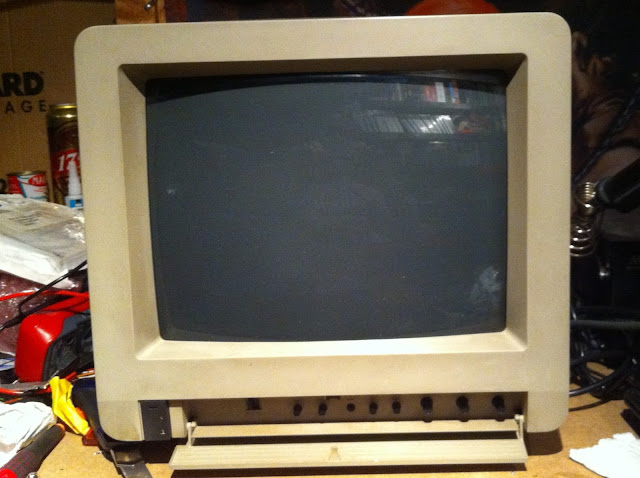 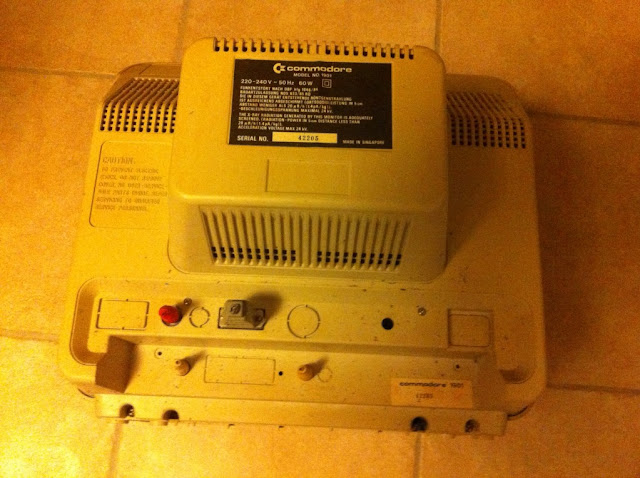 But, as you've properly noticed from the photos, the people who'd thrown these goodies away, had been so 'kind' as to cut all the wires they could find before trashing the lot };-S

Well first thing to do, was to let the whole lot rest in my nice warm basement for a couple of weeks in order to dry it up. After that, I decided on having a closer look at the monitor to see if it was alive. As the power cord had been cut by the former owner, I fitted a power plug I had from and old defect ATX-PSU. The hole in back casing was already prepared; it was only a matter of cutting the plastic bit out with a Stanley knife. 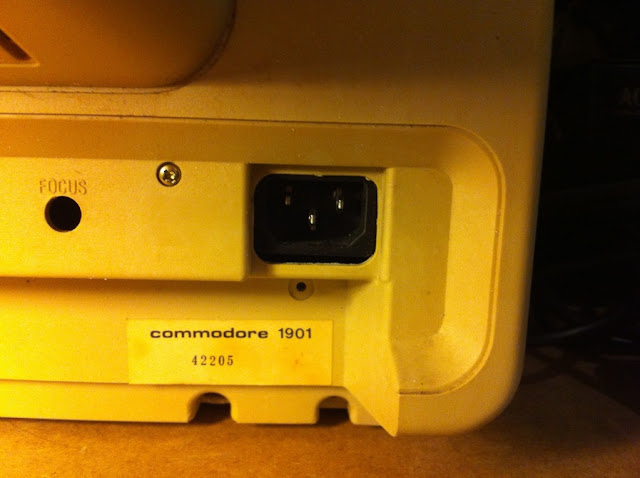 I connected a power cord and pushed the switch. I heard the well-known sound of a degaussing circuit and the high frequent noise from the tube powering up };-P But then there was a loud POOOF, then a loud hissing noise, and then white smelly smoke began to emerge from the insides of the monitor. ARGH! Quickly I pulled the plug, and the smoke stopped emerging. PHEW! I did this testing in the evening in my workshop in the basement; and my workshop happens to be just next door to our bedroom. I was NOT the popular husband that night, as the smoke was extremely smelly; a bit like rotten fish mixed with the smell of old fart };-S

Hmmm, the next day I had a closer look inside the monitor to see if I could find the source of the white smoke. But nothing was obvious... I had to try and apply power again! To avoid getting a divorce attorney on my back, I did the testing outside this time. 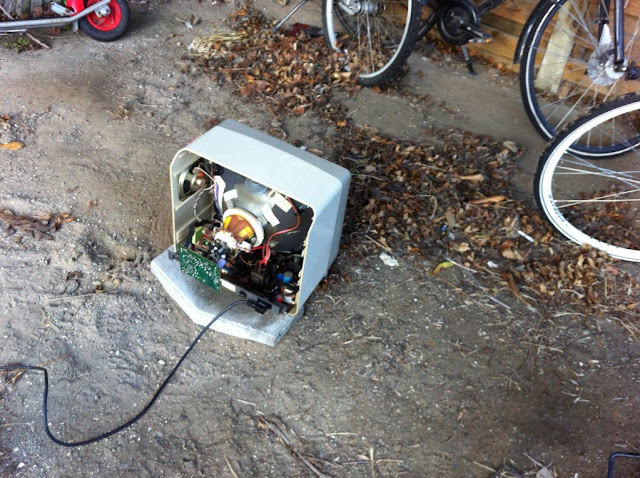 ...but to my suprise, no smoking and no hissing from the monitor?! The bright light outside did however help me get a good look inside. And near the front of the monitor, I found this little felow. 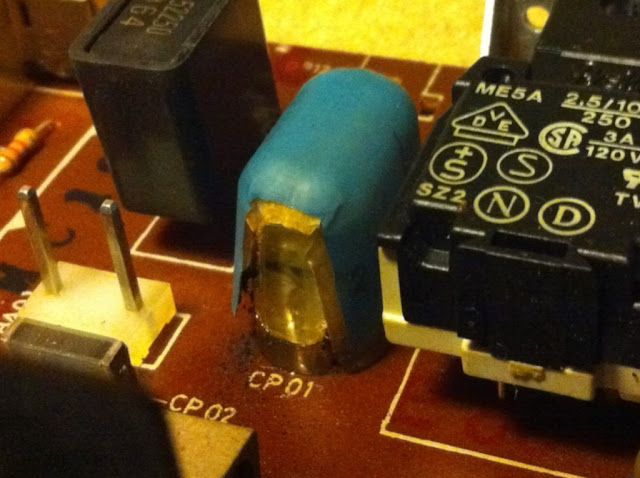 By googling a bit, I found out, that this is what is known as a so called safety capacitor. I don't really know what it is there fore, but it was obviously toasted. So I desoldered the poor thing. 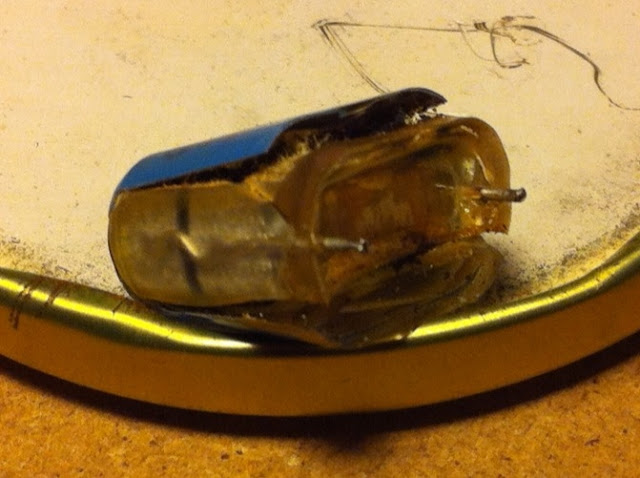 In the defective ATX-PSU mentioned earlier, I found this little guy with the same specs, as the one I've just removed from the monitor. 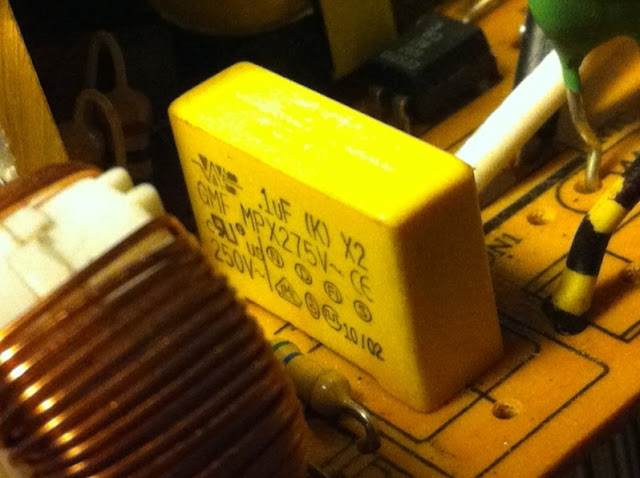 So onto the chassis PCB it went. 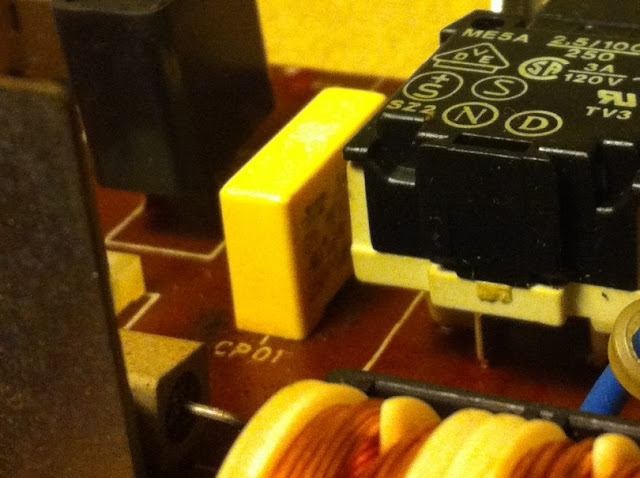 Now there was no hissing or smoking anymore };-P Time to see if the monitor actually worked. I googled that the inputs was digital RGB (used by the C128) and composite. So I hooked up my Amiga A600 through it's built-in composite module and got this 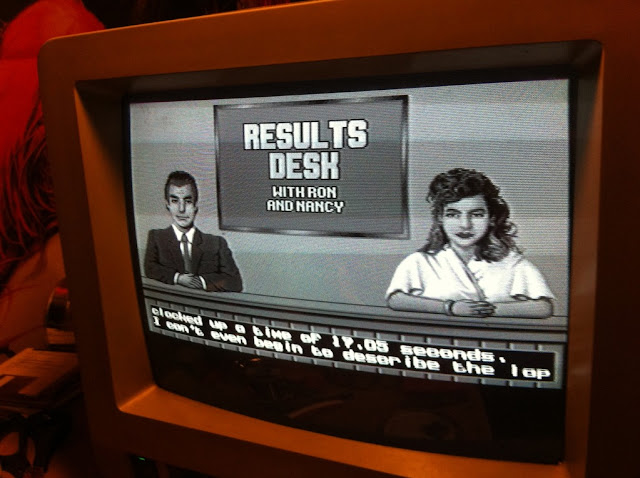 Hmmm, no colours?! This looked an awefull lot like a Commodore S-Video signal missing it's chroma input. Did a bit more googling, and found that this monitor model came in different flavours: With composite input, S-Video or both, but it seems like the chassis is the same on all these; you can just add the missing inputs. However my googling also led me to a blog runned by a guy calling himself JetSetSkippy. He had this awesome post, where he amongst other things, retrofits a C1901 with a SCART plug enabling it to be used with true analog RGB-input (15kHz) };-P This was almost too good to be true, so I found a SCART plug in the pile and started right away. 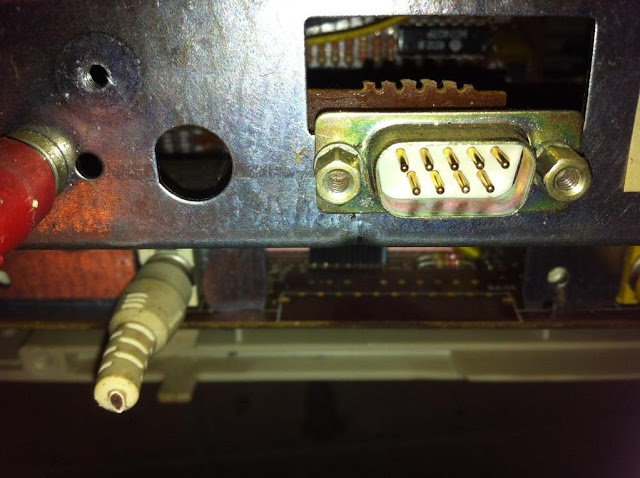 As Skippy also explains, this chassis is already prepared for a SCART plug (notice the 2 rows of holes in the PCB just below the D-Sub in the pic). But the crazy thing is, that the designers must have gotten something wrong; cause the holes are reversed so you can't just solder in a standard 90 degree angled SCART plug. Maby that is also why this monitor ended up not being shipped with a SCART plug?! Therefore I (like Skippy) soldered wires on all the pins of the plug and began the cumbersome task of soldering them onto the chassis. 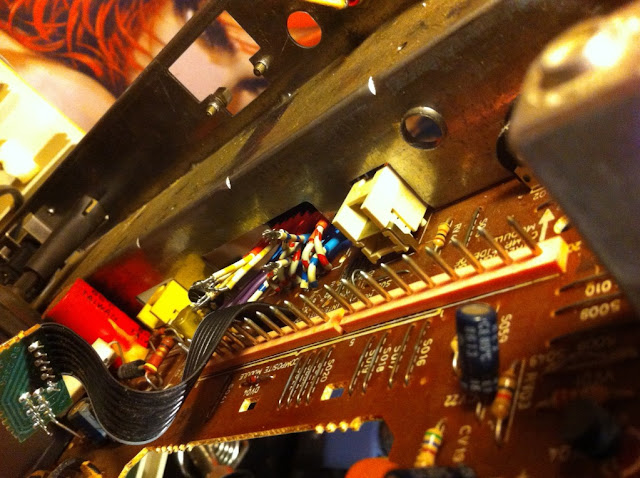 Phew! All the wires had to fit in a really tight spot, but finally I pulled it through (look under the black ribbon cable). 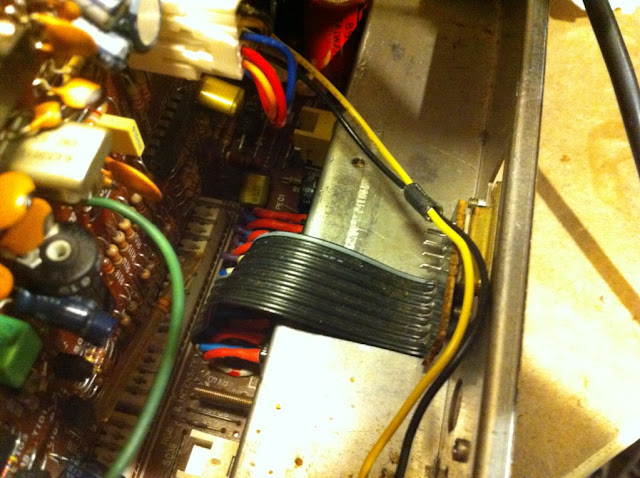 The plug was then attached to the metal frame in the hole already there... 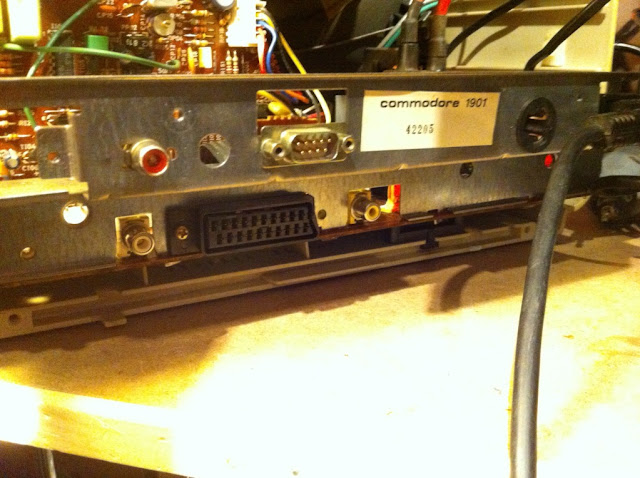 ...and the plastic casing was cut. 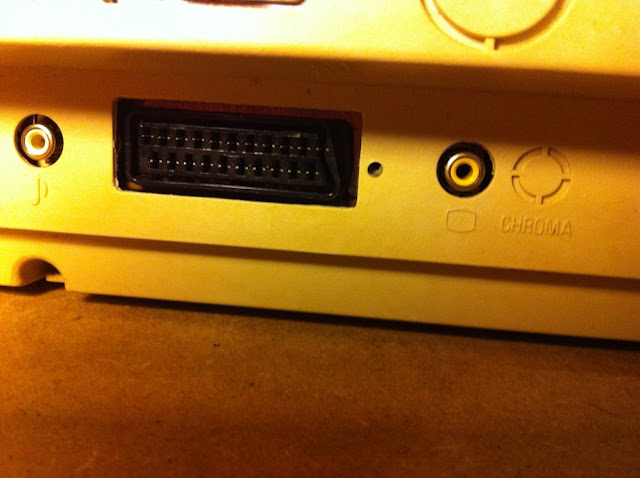 And now for a test };-P I first attached the A600 via my homemade RGB-Scart adaptor and the result was fantastic.

Next I tried an arcade PCB (attached via my homemade SuperGun) with equally fabulous results. 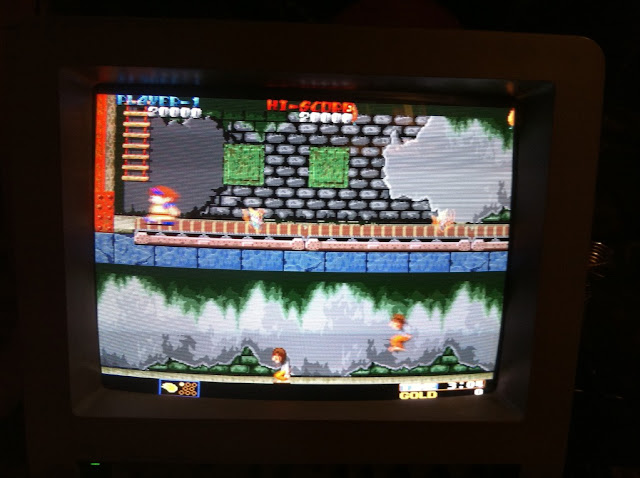 All in all, I consider this a great success! And should any of you guys out there have an old C1901 in the attic, I strongly encourage you to fit it with a SCART plug. It gives a very clear and crips picture, and the chassis is all analog with lots of knops, dials, and switches to make adjustments with. So far it has been able to sync with everything I have feed it, so it's going to be my main test monitor when I do repairs from now on.