Retrofitting an USB-port on a Fluke9010A

Late November this year, I managed to snap up a dead-cheap Fluke9010A Microsystem Troubleshooter from evilBay. I owe tlosm aka Luigi from Amibay.com much gratitude for agreeing to act as middleman, as the Italian seller would not ship outside Italy except for a very unreasonable price. I ended up paying 65EURO all-in-all (half of what I would have paid if dealing directly with the seller) };-P

What I didn't know, was that a pleasant surprise was awaiting me upon receiving the machine: It was equipped with both the RS232- and the 006-option! };-P

After some visual inspection, I found that it had a few scratches, was missing a couple of screws and the tape drive, and was pretty dirty, but it powered up nicely and passed the self-test. 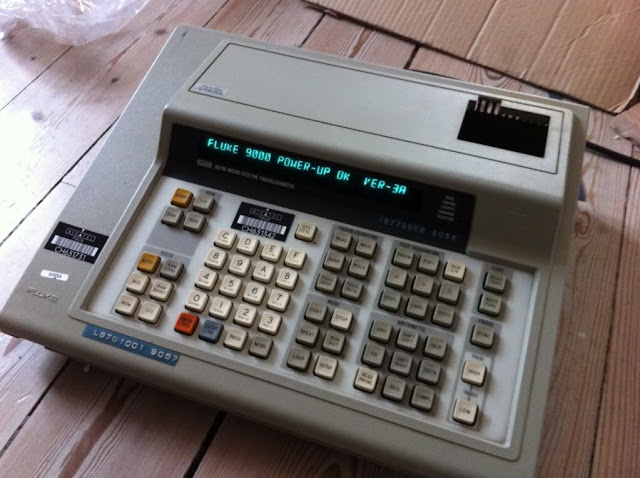 So I decided to clean it a bit.

and ended up with a machine that looked pretty decent (and still passed the self-test). 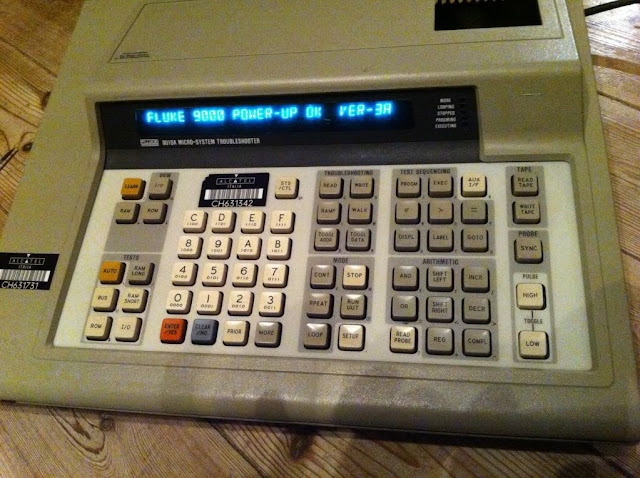 Now in order to start playing with this wonderful machine, I would need some interface pods. But that can take some time to find, so in the meantime, I would try to use the RS232-option to hook up it up to a PC using FIDE. Now I do have an old laptop with a COM-port, but would much rather like to use my lovely Lenovo that is my primary PC, but only has a couple of USB-ports. So I went to evilBay and ordered a cheap little USB-to-RS232 Adaptor. After a week or two it arrived. 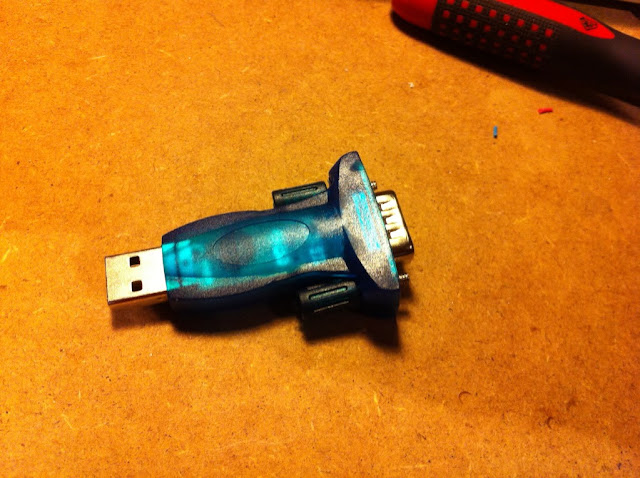 In order to use it with the Fluke, I would need a cable too...or would I? Hmmm, the adaptor was easily disassembled by pressing gently on the USB-plug revealing a tiny PCB with both plugs soldered directly onto it. 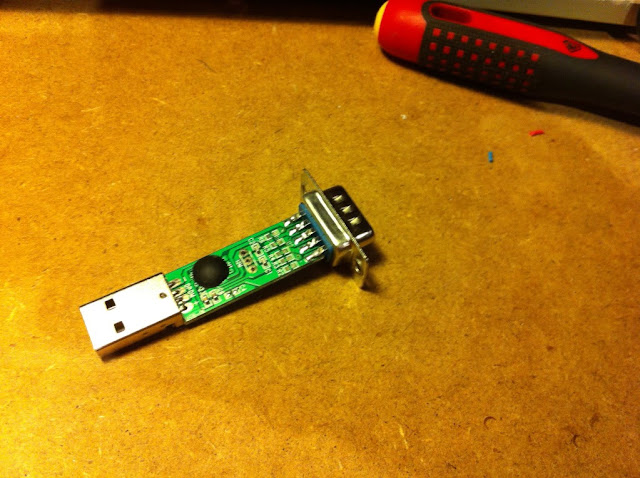 My plan was to built this into the Fluke and add a USB Type-B plug on the backplate here. 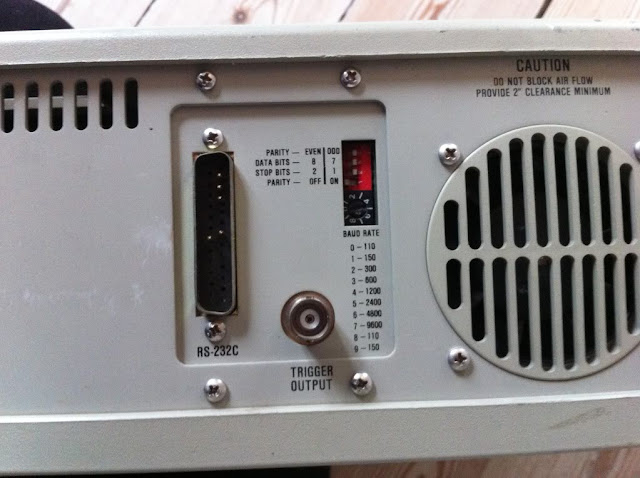 So I started by desoldering the D-Sub from the adaptor. 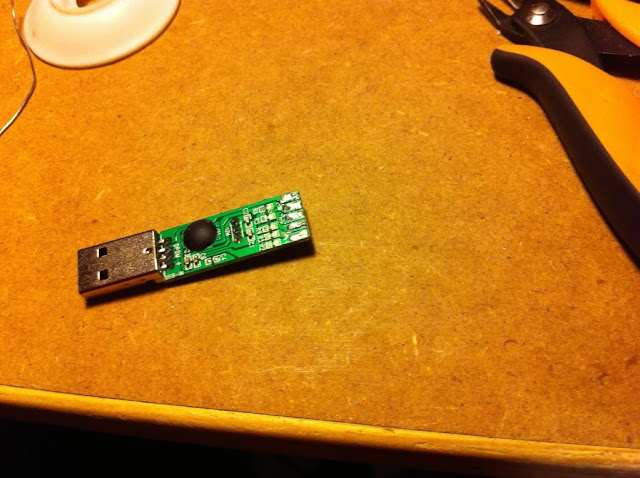 Next it had to be hooked up to the Flukes RS232 port. The port is attached to the PCB by a 6-way molex connector (only 5 pins in use). 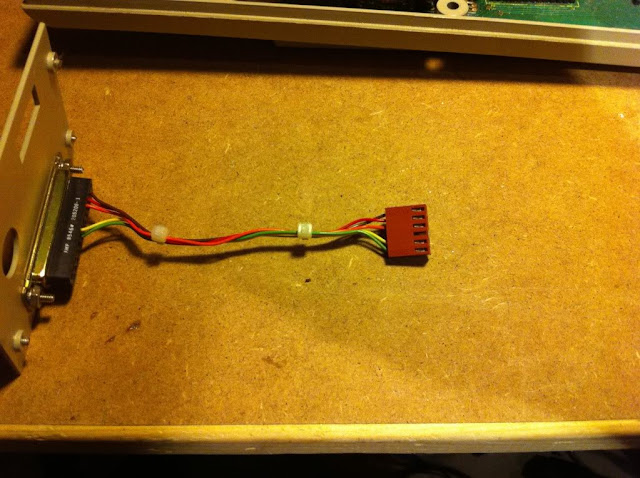 If you press very gently (but firmly) into the holes on the side of the molex plug with a small screwdriver, you are able to pull out that connector. My plan was to "piggybag" these 5 connectors with wires. 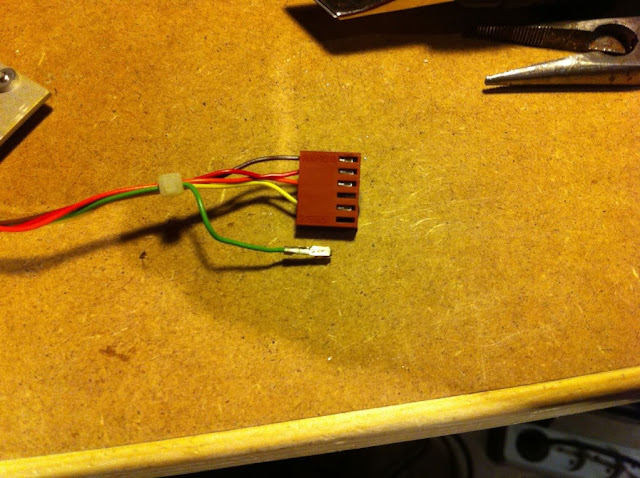 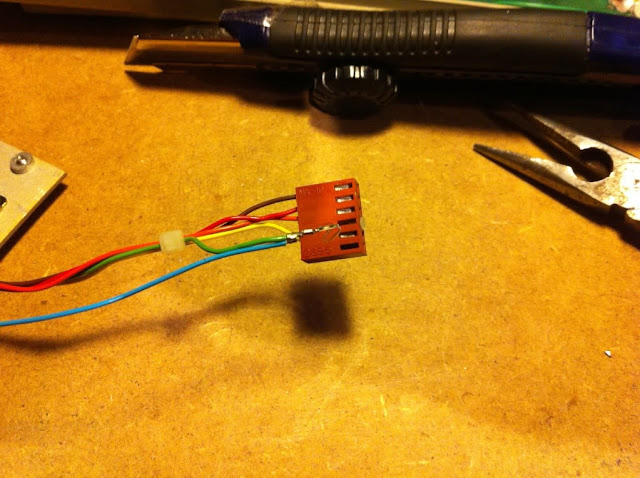 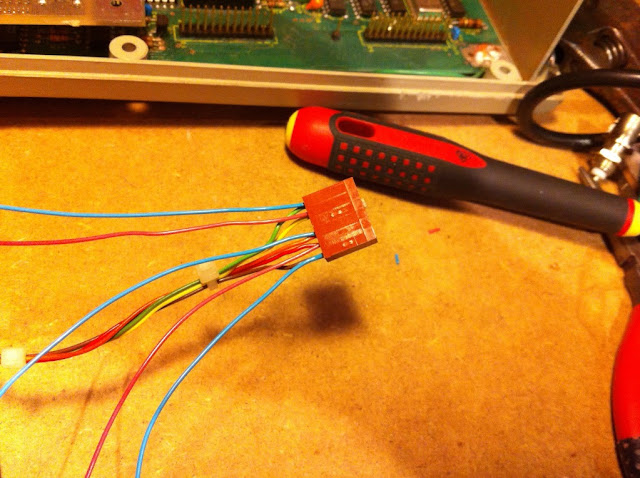 Next I hooked up the adaptor according to this diagram. I plugged it into the PC, fired up FIDE, prepared the Fluke and tried to send a sample program. Nothing at all happened on the Fluke! };-S Hmmm, went back and had a read in the Fluke manual and discovered that one should use a null-modem cable and not a strait-through. So changed the wiring according to this diagram instead. Now at least something displayed on the Fluke: Sometimes I got "PARITY ERROR" and sometimes "FRAME ERROR". Tried a bunch of different combinations with speed, parity, number of databits, and start- and stopbits. Still same-same. I decided to let the whole thing rest for the night, as I was also i bit tired.

Next day, fresh in my mind! I discovered a little white marking on the turnwheel to set the RS232 speed on the back of the Fluke (see pic higher above). Until now I had though that the slot you put the screwdriver in was the indicator of the position, but having a closer look at the white marking, I could see the shape of a small arrow underneath it. AHAAAA!!! He cried out loud! I now put the turnwheel into position 7 according to the arrow and presto... I was able to upload my sample program 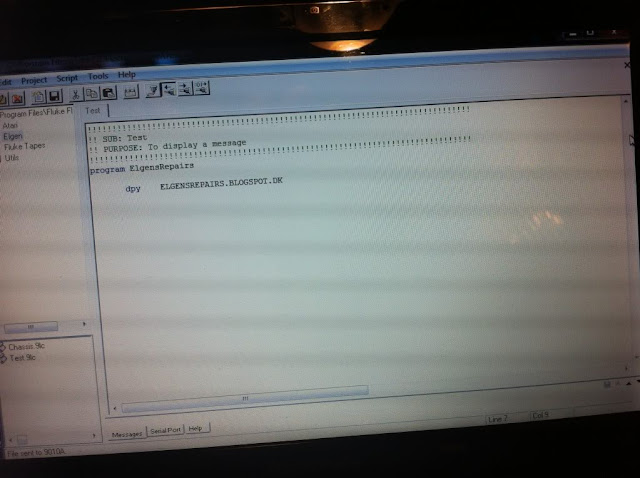 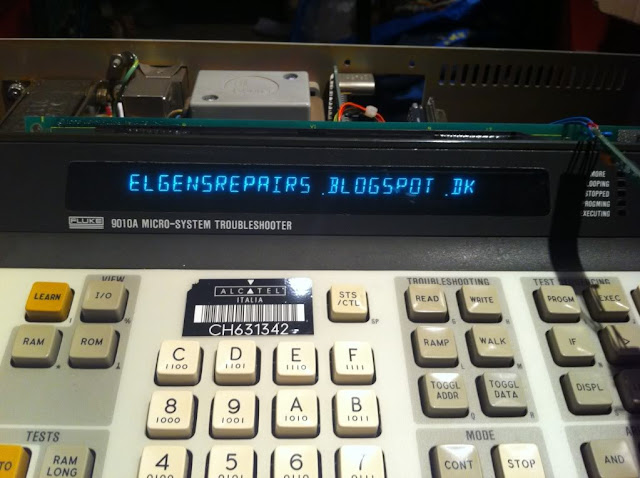 Fantastic! So it was actually possible to communicate with the Fluke using FIDE on Win7 (32bit) and a cheap USB-to-RS232 adaptor };-P Now I could have just stopped there with the USB-wire coming out of the tape-drive hole; but I wanted it to look a bit nicer than that. 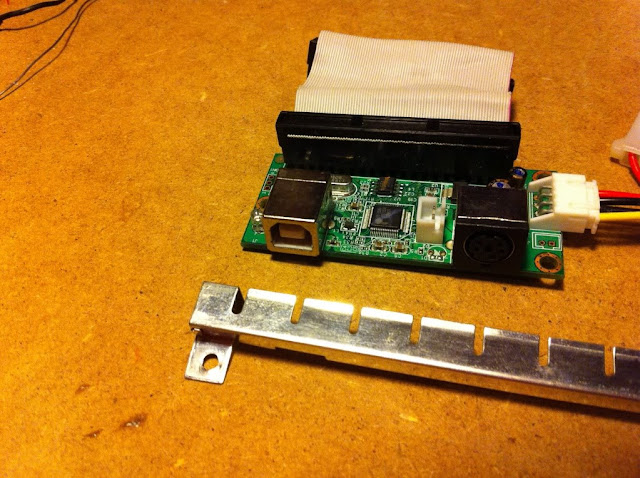 Desoldered the USB Type-B plug and made 2 small wings from the metal piece using the Dremel. I then soldered the wings onto the sides of the plug.

Next I found a nice place for the plug, 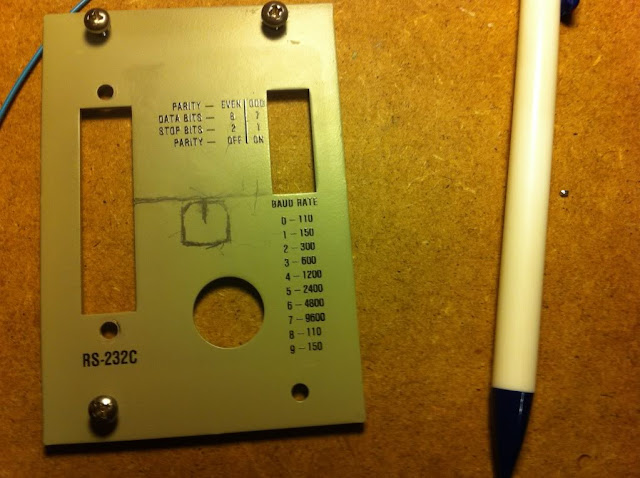 made the hole using Dremel and some small files, drilled 2 holes and attached the plugs using small nuts and bolts. 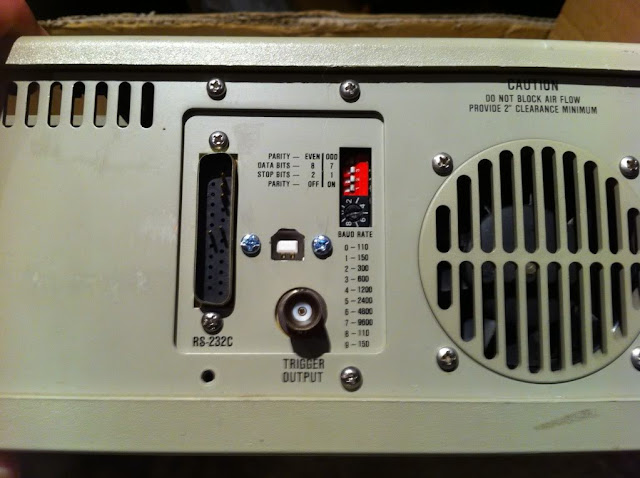 Here is a picture with the USB cable plugged in 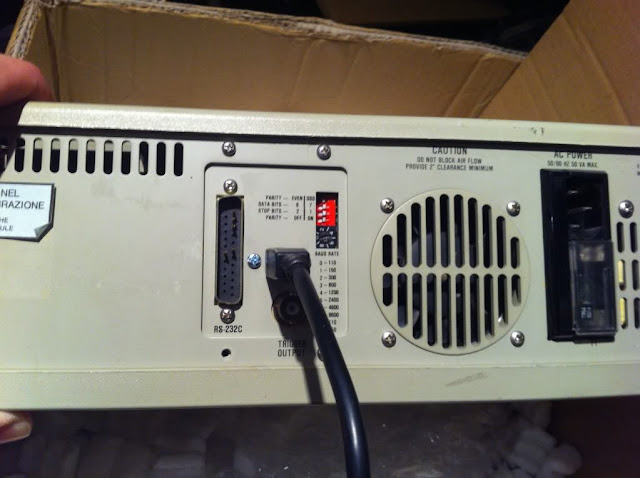 and here a look inside the Fluke 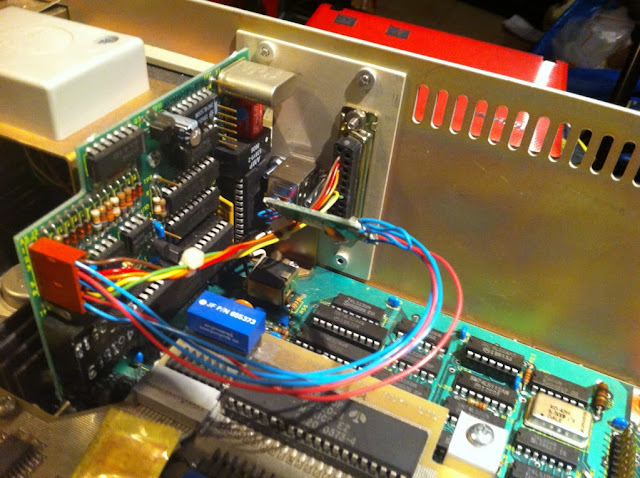 All in all I'm pretty satisfied with the result, and I don't have any fuss with messing around with adaptors and null-modem cables when working with the Fluke.

Last but certainly not least, I have to send a big round of thanks to Andy aka Andreas who is running andys arcade for kindly selling me 3 interface pods here just before Christmas. It was Z80, 6502, and 68000 (the 68000 was even from his private collection). They all passes self-test, but besides that, I haven't had time to play with them with all this Christmas going on.