As regular readers might have noticed, I've in the process of pimping my Amiga A600HD at the moment. And now it's time to add some more Chip RAM. On Amiga Chip RAM aka Graphics RAM is the memory shared between the CPU and all the custom chips; hence the name "Chip RAM" };-P. A600HD is born with 1MB of Chip RAM installed, and back in the days that was a lot (twice as much as A500!!! };-O). However now-a-days, if you want to run games directly from the harddrive using WHDLoad, it's a little bit on the small side. The 68000 CPU can address up to 2MB, so it would be nice to add an extra 1MB to the pool };-P Now there are some commercial expansion cards that does that; the most popular atm being the A604 Memory Expansion. However it is imo a little expensive and also I really enjoy doing stuff like this myself.
So I started googling for DIY-projects expanding the amount of Chip RAM and quickly found this wonderful hack (now known as "The-A600-Piggyback-Hack") by Zetr0 in a sticky thread over at AmiBay; he piggybacks a DRAM IC on top of each of the 2 already fitted in the miggy. That in turn lead me to this blogpost by Victor Trucco (I ran it through google translate, as I can't read Brazilian Portuguese) via a link in the thread; he piggybacks 2 DRAMS on top of 1 of the already fitted DRAMs.
Now I had some great ideas to work from, however I wanted a solution that was easy to remove again, and also I wanted to give the project my own personal flavour };-P After reading the thread at AmiBay and inspecting the schematics for the A600, it was obvious that all the address-, data-, and control-signals needed for the extra Chip RAM are present at the trapdoor connector. So my plan was, to attach the 2 extra DRAM-Chips piggybacked together there. After doing some crude measuring, I found that the pitch between the pins in the trapdoor connector is the same as in a socket for PCI-card to fit in a PC.
I didn't have neither DRAM-chips nor PCI-sockets, so I went hunting on evilBay and quickly found a guy offering a lot of 10 Toshiba TC514260DJ-60 SOJ chips for a price of only $15.33 incl. shipping to Denmark. Next I found a lot of 5 PCI slots at a price of $7.41 incl. shipping.
I waited and waited, but finally both lots arrived in the mailbox };-P Now I had all the stuff needed; for wires I was going to use rainbow ribbon cable (having the same pitch as the pins on the DRAMs), as I just love how is looks like candy };-P 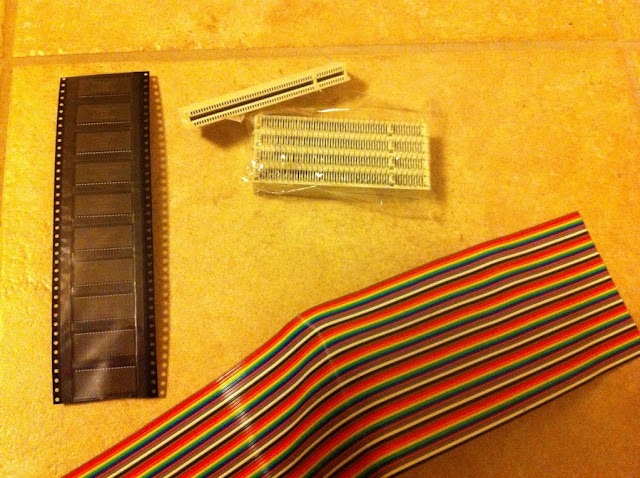 First I checked if my measures had been correct (I had just tried to match up the pins using an old PCI card). Luckily, it is a perfect match };-P 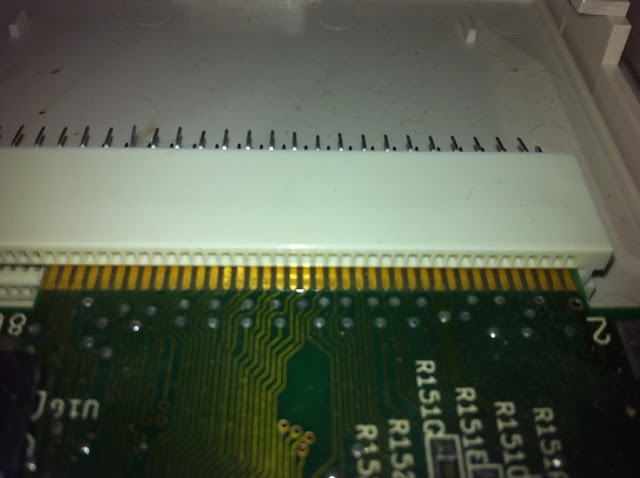 The first thing to do was to prepare for the "marriage" of the two DRAM ICs. Being of SOJ type, they have their pins bend underneath themself, kind'a like a dead spider. So the one to go on top, had to have the pins straightened. First you lift the pins carefully with a Stanley knife. 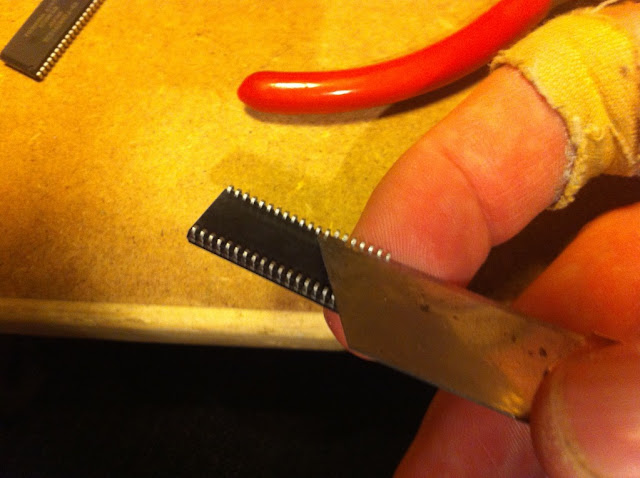 Then use a set of pliers to make each pin straight. Here's the final result. 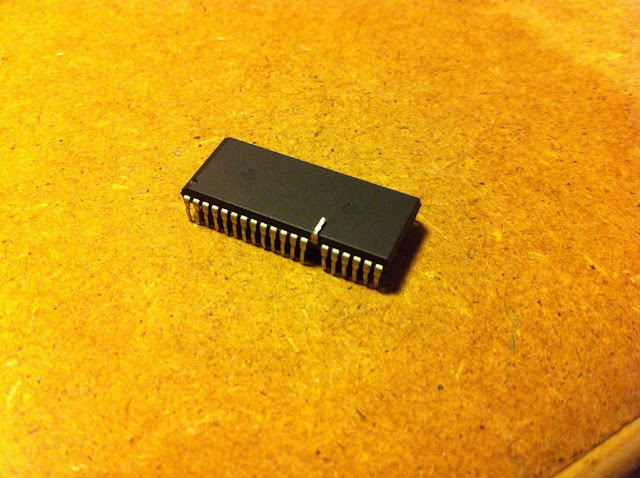 One pin is bend upwards. That is the RAS (Row Access Strope); the only control-signal that is not the same for the two ICs.
Next our happy couple are pressed together and "married" (do I hear wedding bells? };-P). 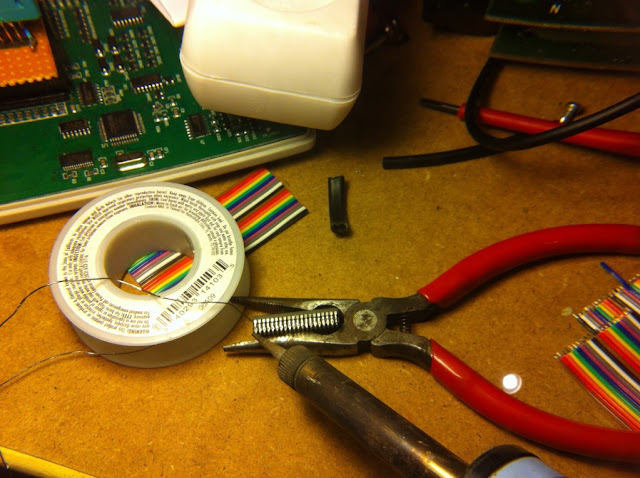 After that's done it's time to cut them rainbow ribbons. 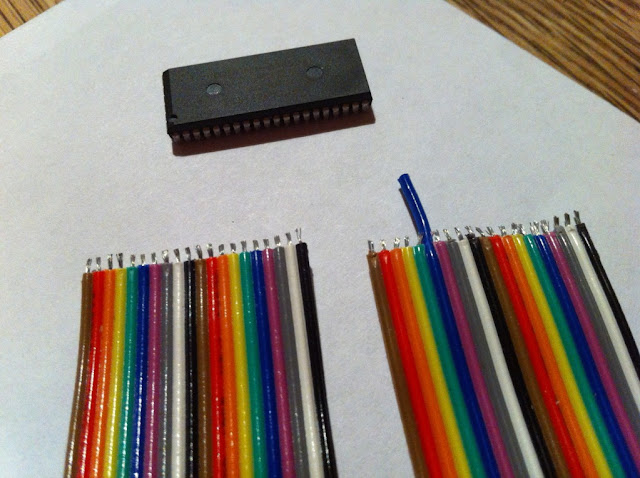 The longer blue wire is for RAS on the upper IC. Luckily the IC-pin just beside the the RAS is NC (non connected), so no harm is done using that for the upper ICs RAS.
First the pins 21-40 are soldered. 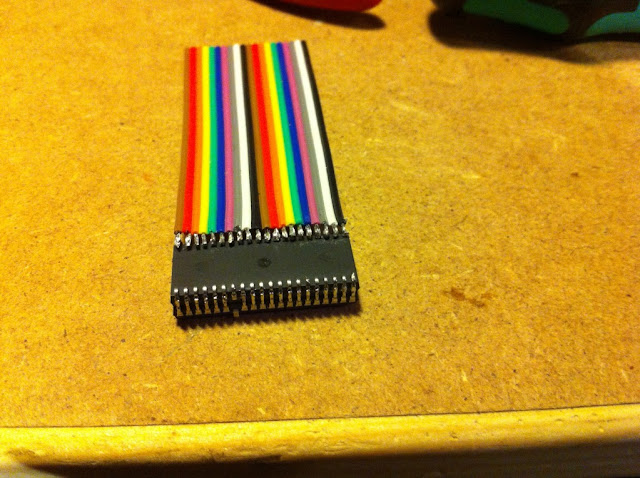 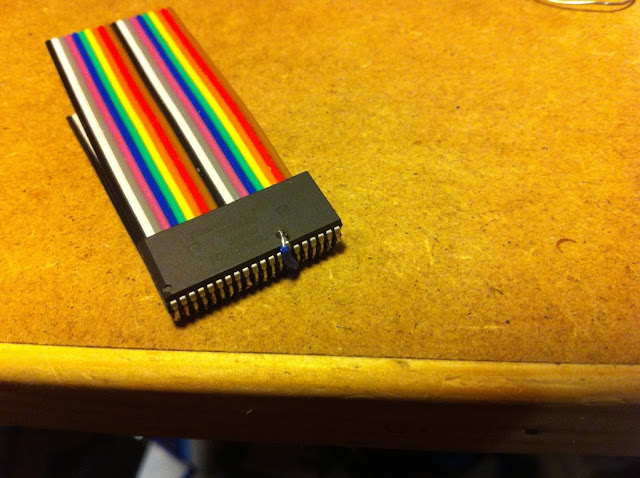 Now all the wires must be soldered to the PCI socket 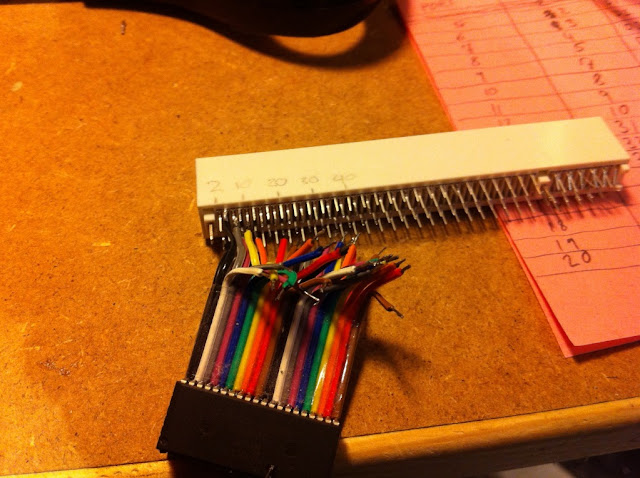 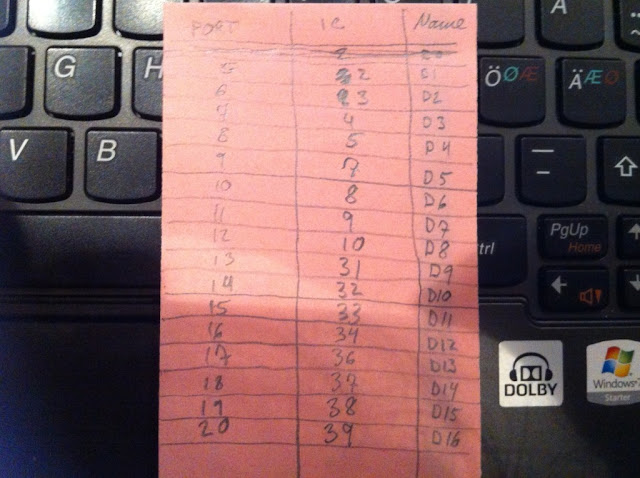 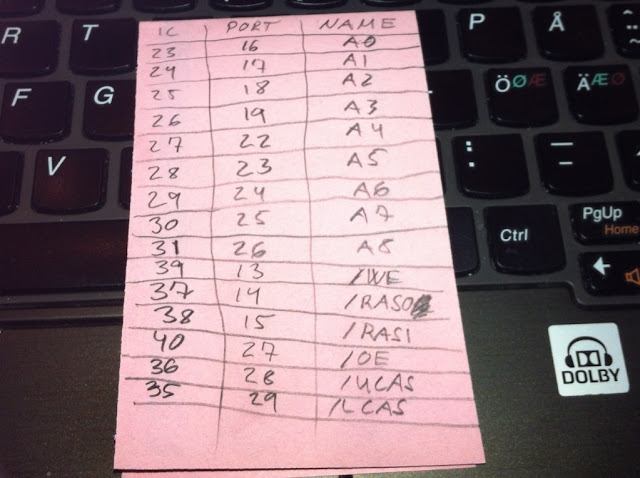 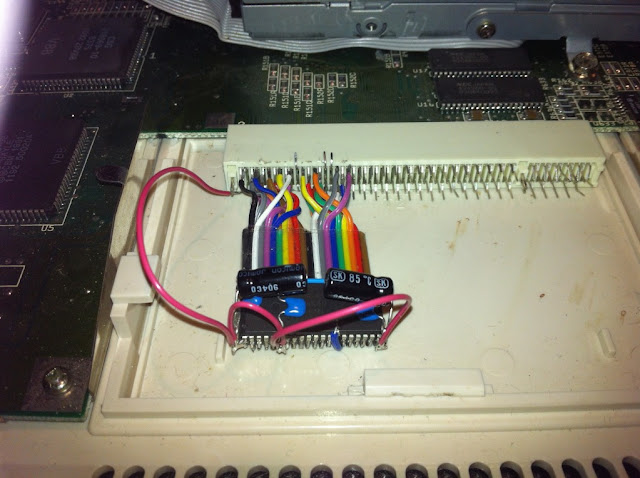 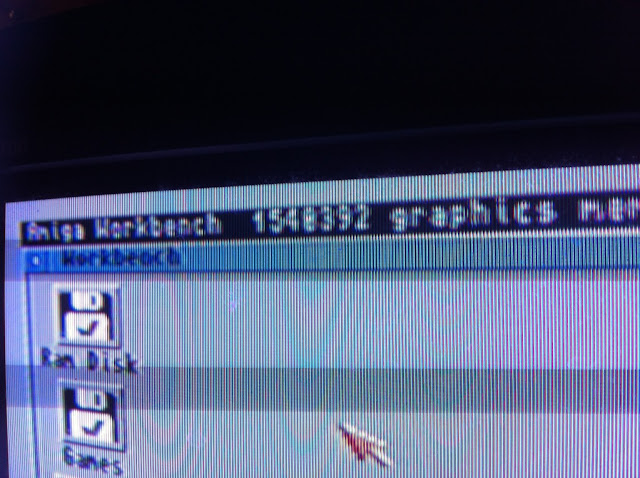 But when trying to use it, things got bad. The memory tester i use reported many random errors (random meaning not at the same addresses everytime) and when trying to load big games (like Cinemaware-stuff), I got random crashes.
At first I thought that this was a problem related to smoothening and/or decoupling, so I tried adding one 220nF capacitor across each supply to the ICs and one 2.2uF capacitor at each end of the powerrail for the ICs. That only made things worse...so removed the caps again. But now I still had as many errors as when they where still fitted. Grrrr!!!
Decided on giving the whole project a rest for a few days };-S

I made a post in the thread over at AmiBay and Zetr0 replied, that technically the solution looked fine. However he thought that caps might not be the way to go as they might induce more noise into the circuit than they'd remove. He also mentioned, that I might've toasted one or both the DRAMs and proposed that I either tried to test the two ICs individually or started all over with a new set of ICs.
I desoldered the IC couple and tried to divorce them, but it was not possible without destroying them completely. So in the bin they went. I made a new couple just as before and soldered them on the ribbons, but it ended out in one big mess. These ribbons are not meant for soldering in the first place, so the heat from soldering, desolering, and resoldering had made the insulation into one big pile of goo. So desoldered the new couple again.

I now decided on trying to use kynar instead of ribbons. They are much thinner and singlecore, making it much easier to control. However I was sad to give up on the ribbons, as they just look so cool };-(
Following an idea given to me by Phipscube (a dear personal friend and also an AmiBay member), I taped a piece of cardboard to the PCI socket and taped the ICs upside-down on it. I cut a hole in the cardboard for easy access to the lower pins of the socket when soldering. Then I started soldering the kynars one by one. 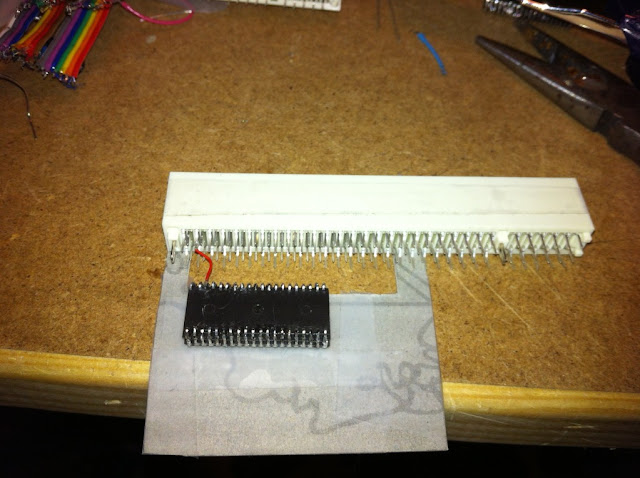 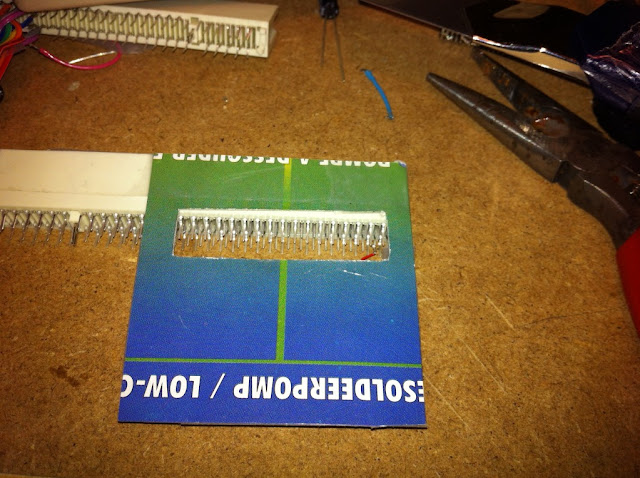 Again following a good advice from Phipscube, I did the soldering over a couple of nights in order to be fresh in the head...otherwise you end making a mess. 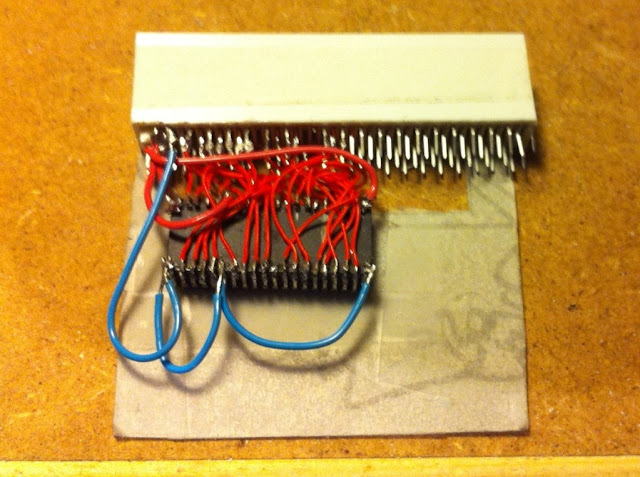 Once again time for a test in Miss Miggy, but (MOAN!) I still had the frakkin' random errors! };-S
Tried to add caps, and again it just made things worse!!!
Now I was so close to giving up and trash the whole gorram project. However during the day, I came to think of good ol' Faraday and his cage. Hmmm, maby the instability was caused by electromagnetic radiation from either the near-by circuits, or maby just general radio-wave-noise. So after having tucked the kids in that night, I first wrapped the construction in paper to insulate 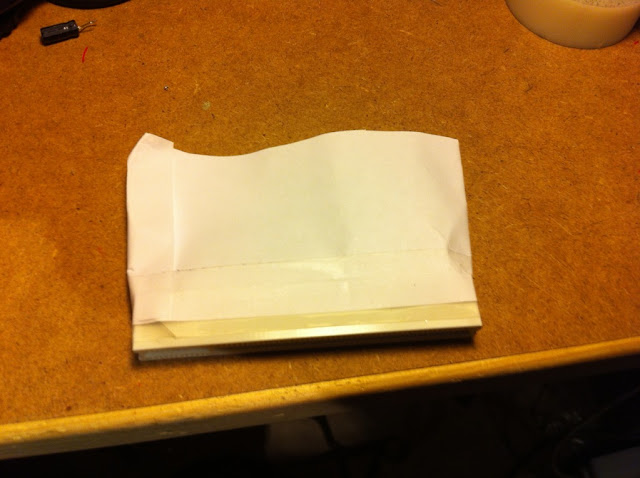 and then in tin foil (yup, the same kind I use for my kiddies school lunch };-P). I attached it in the trapdoor and connected the tin foil to ground. Aaaaand.... 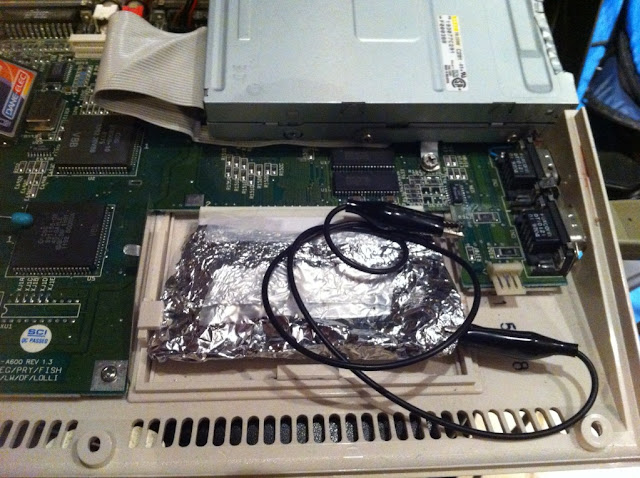 Heureka! The random errors had gone away! };-P


"Dad, did you put chips in my lunch pack for dessert?" "Sure did son, but not the potato kind };-P"

Now I had something that worked; it was time to make it look good too };-P
First I gently lifted the ICs from the cardboard using a Stanley knife. Then replaced the cardboard with a smaller piece that didn't have the hole in it.
Next I cut the PCI socket down to the same size as the connector in the trapdoor using Mr. Dremel and a small file. I then cut the end of the piece that I'd cut off, and superglued it to the end of the now smaller socket. 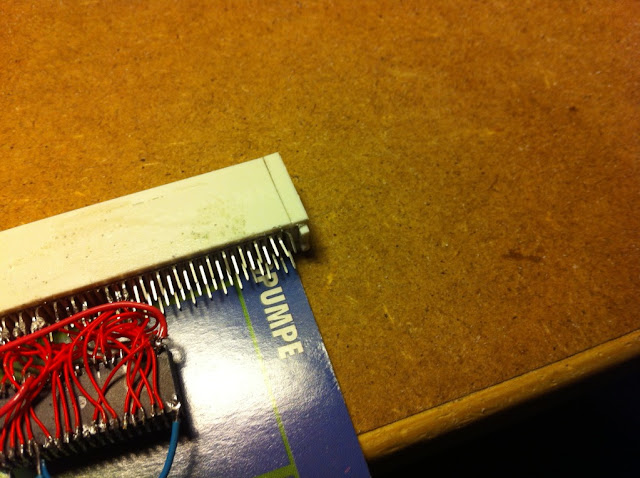 And now for a nicer Faraday cage.
Ever since I started doing electronic projects as a kid, I've always had this thing about having some tins in different sizes (from canned good) on my work bench. They often come in quite handy; as tabletop trashbins (for things that you might/might not need again later in the project); for small things (screws etc.) when you dismantle devices; for very hot solder when you clean the filter in you desoldering station; find more uses yourself };-P
Bottom line, I had this little fellow stading on the table that day. 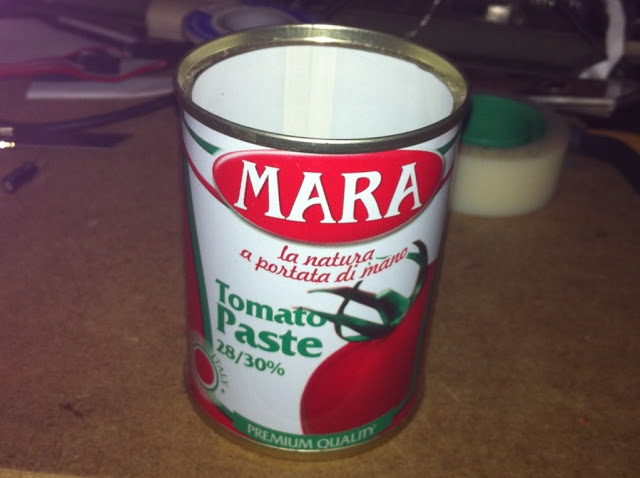 I scraped a little bit in the paint and found that it was conductive and normal solder for electronics would bite on it. So I cut off both ends and cut the tube open using my Dremel. 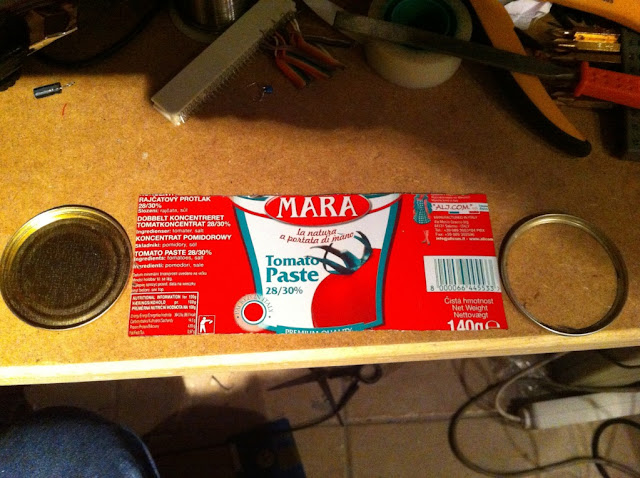 (But perhaps I should've used a heavy duty disc instead of a normal one; the one on the right is a brand new disc };-P) 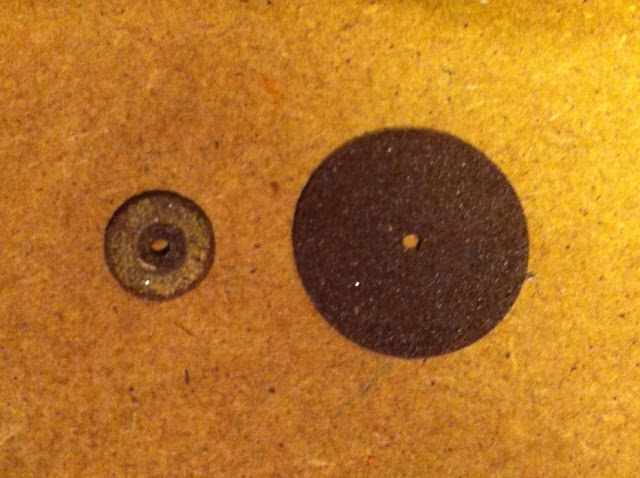 Next I cut out one big piece (top and bottom of the cage) and 2 smaller ones (the sides) using an old pair of scissors. I then bend the large piece and soldered the sides on leaving a hole for the socket. 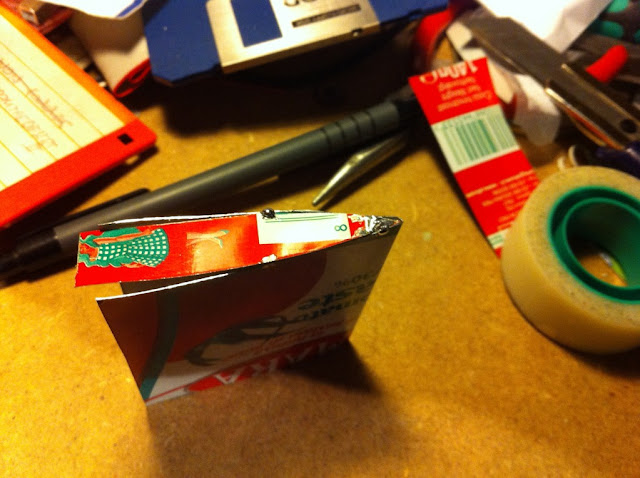 As the last thing I soldered a wire from GND on the socket to the cage in order to ground it, and here it is in all it's glory: 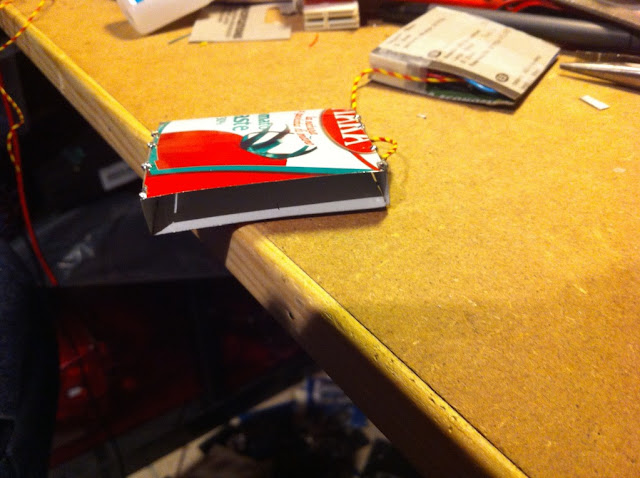 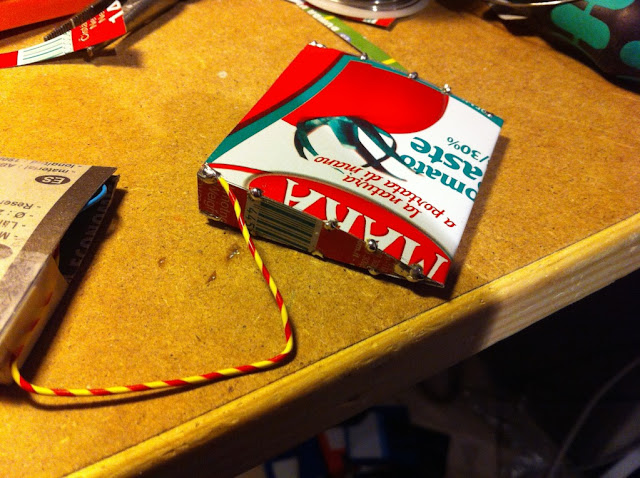 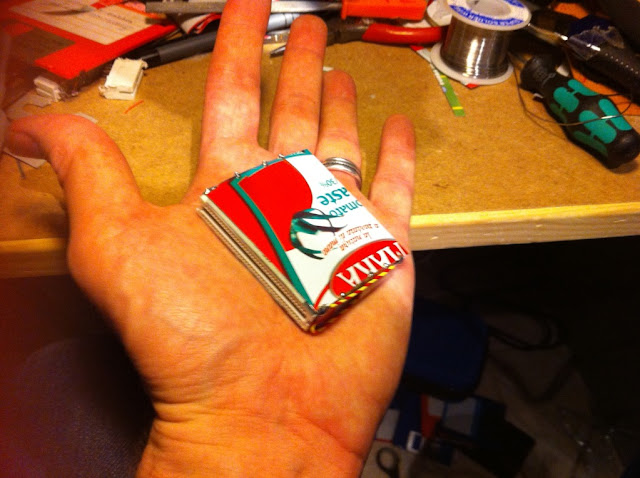 And here fitted in Miss Miggy (and it still works };-P) 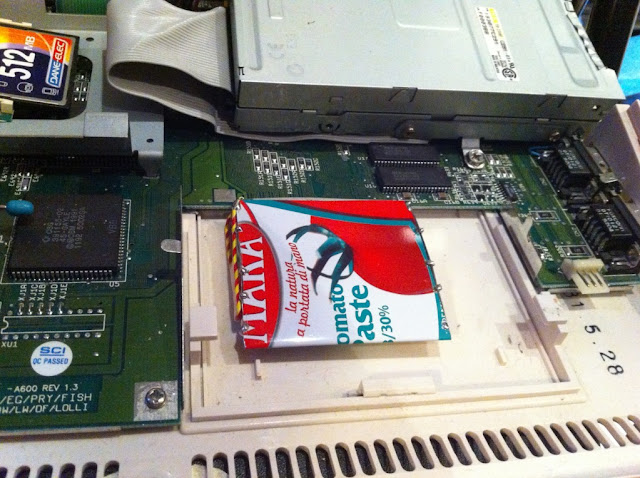 I wish to thank Zetr0 (AmiBay) for inspiration and good advice, Victor Trucco (blogger) for inspiration, and Phispcube aka Les (AmiBay and dear friend) for good advice and cheer-ups through many many txts often very late at nite };-P
Posted by Elgen at 10/29/2012 10:04:00 pm