As many of the people who know me personally might have discovered, I'm a big fan of the shmups made by Psikyo and V-System. So I was very pleased when I was able to snap up a cheap original defective Aero Fighters on evilBay };-P The listing text said "only small graphic error during play", and already when unpacking the PCB from the box, I got a strong feeling of what might be wrong with this poor PCB. 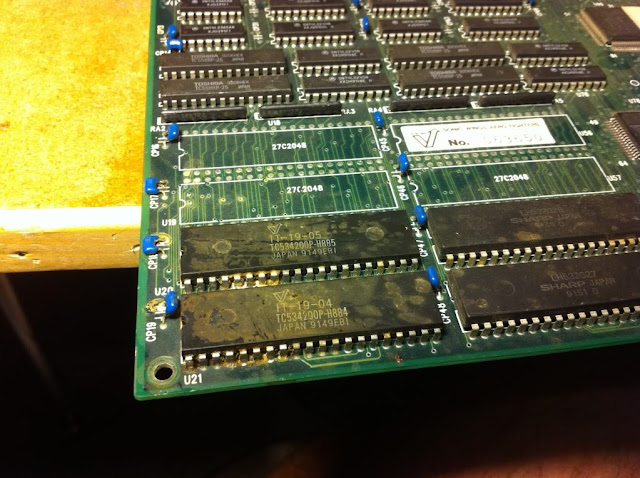 It had a corner full of rot (corrosion)! 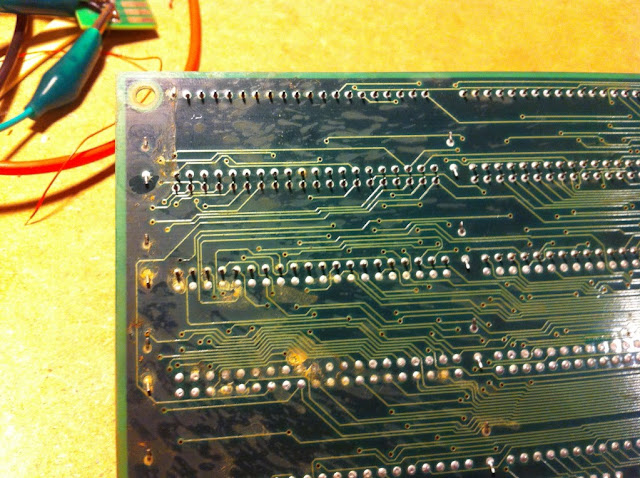 And at the bottom of the box, I found this 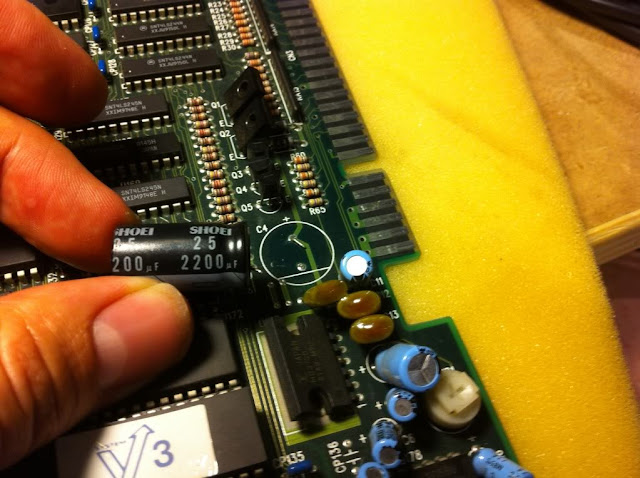 the main smoothing cap for the 12V rail. However, I tried to connect the board anyhow, to see how much damage this rot made to the actual game.

Many of the graphic elements in the intro and in-game, had stripes through them. This is often caused by poor pin connection on either RAM or ROM ICs. The ICs in the rotten area are MASK-ROMs, so I was pretty sure I'd found the culprit causing these errors. So I decided on desoldering the 2 MASK-ROMs with the "V-System"-logo on the silk screen. 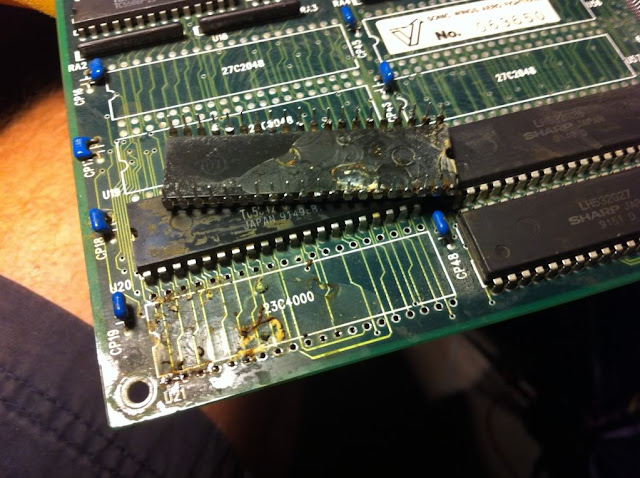 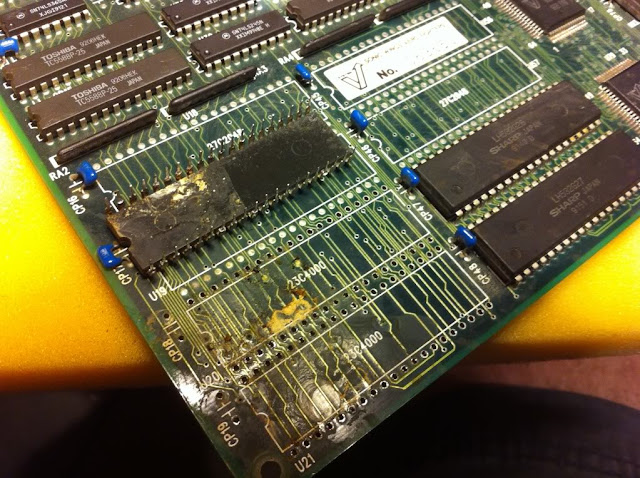 I can't say that the sight that met me underneath the desoldered ICs was pretty }:-S So I started by giving that part of the PCB a good scrub with rubbing alcohol 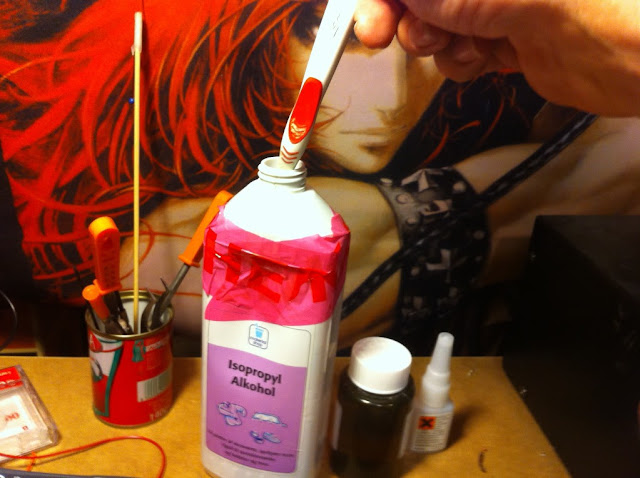 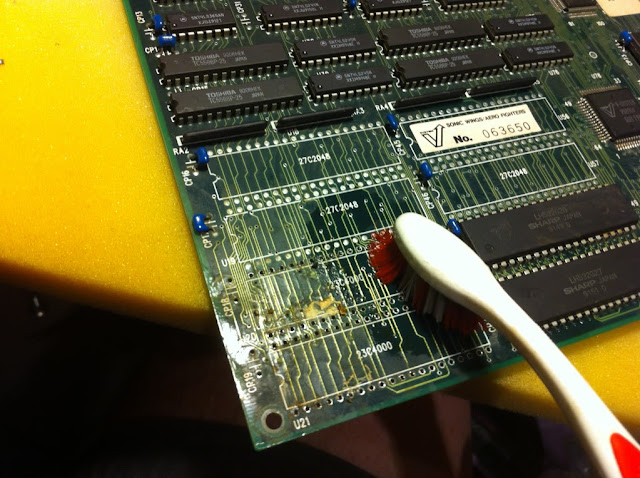 That actually did fix up the PCB a lot, but it didn't remove all the rot 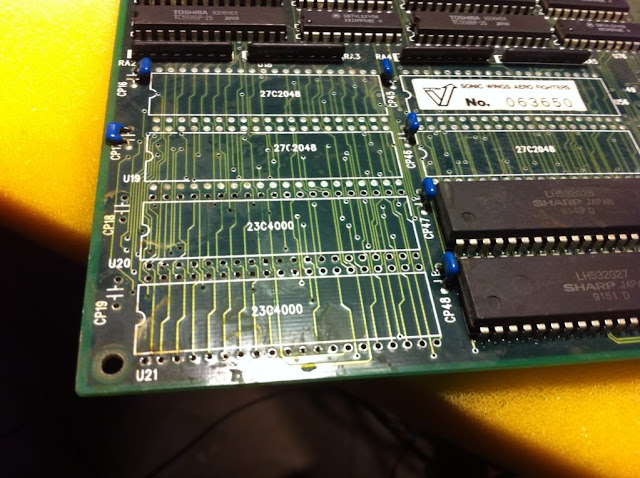 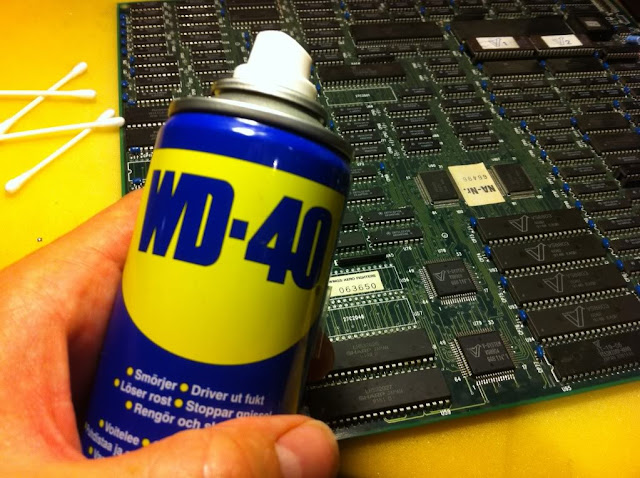 So I sprayed the infected area, waited about 5mins to let it work, and then started rubbing the individual circuit tracks with a swap. 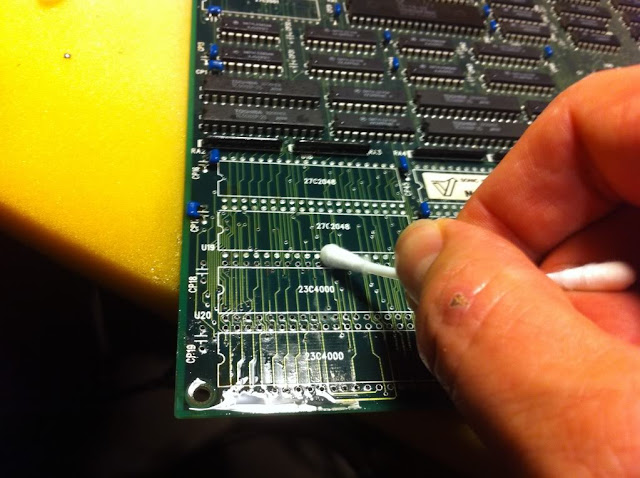 After that I gave it a good scrub with rubbing alcohol and tooth brush again, as WD40 is oil based, and that actually made the area look a lot better };-D
Next I went through the area with my continuity tester checking the tracks, and found two broken. Both of them were at places where the track had a via on it, and then only one end made proper connection. So I carefully scraped a bit in the via holes with a Stanley knife, uncovering a little bit of copper. I then took a piece of kynar and stuck into the via hole from the parts side, used a lot of liquid flux 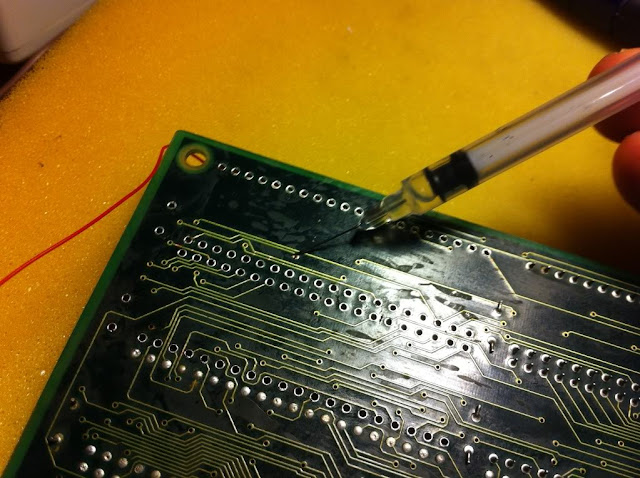 and soldered it into the via hole from both sides 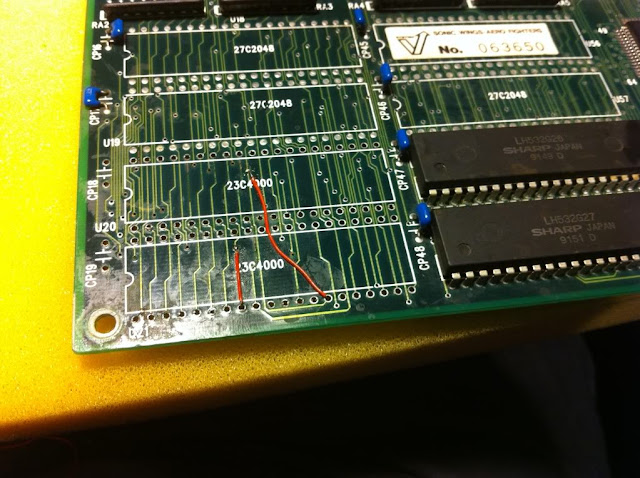 The other ends of the kynar, I just stuck into the normal PCB holes. 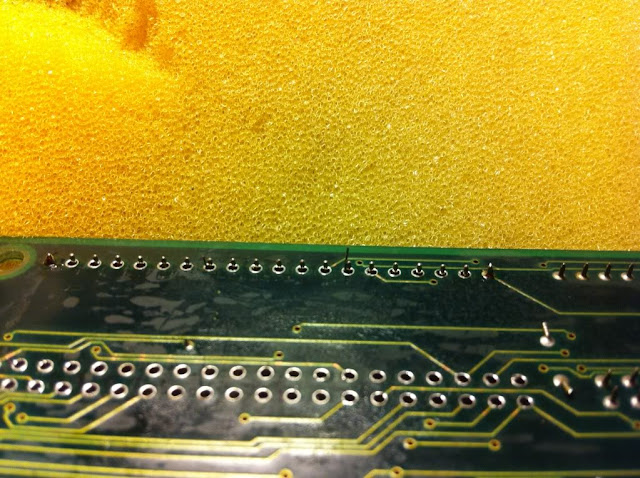 That way, they'd get soldered in place automagicly, when I soldered in the sockets for the MASK-ROMs };-D And here is the final result, with the sockets (header strips) fitted 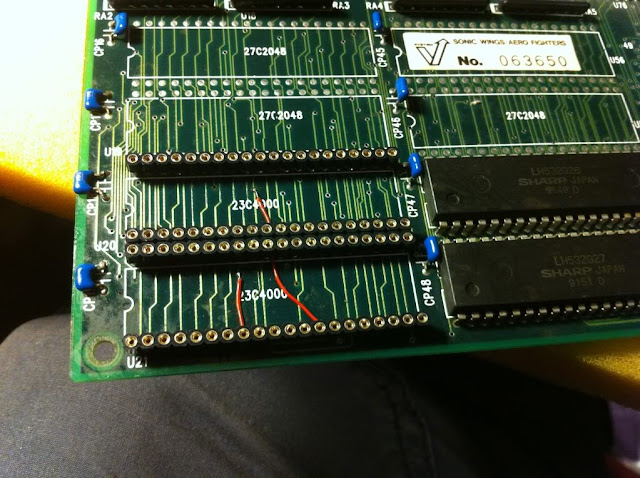 and from the solder side 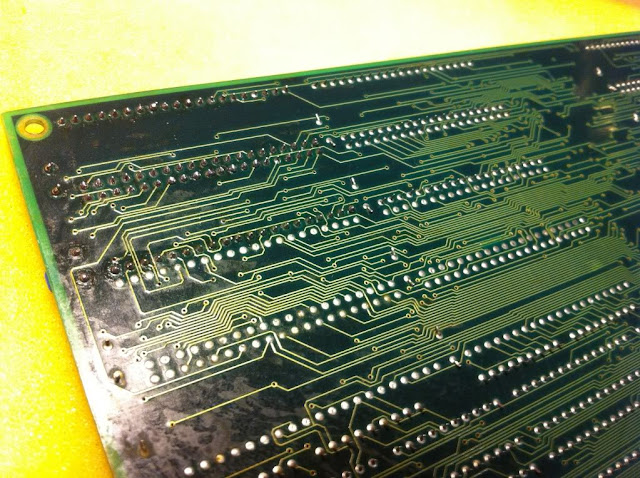 Hard to see just how rotten this corner was just a while ago };-P The MASK-ROMs themselves, also had a scrub with WD40 and rubbing alcohol, and actually ended up looking quite decent. 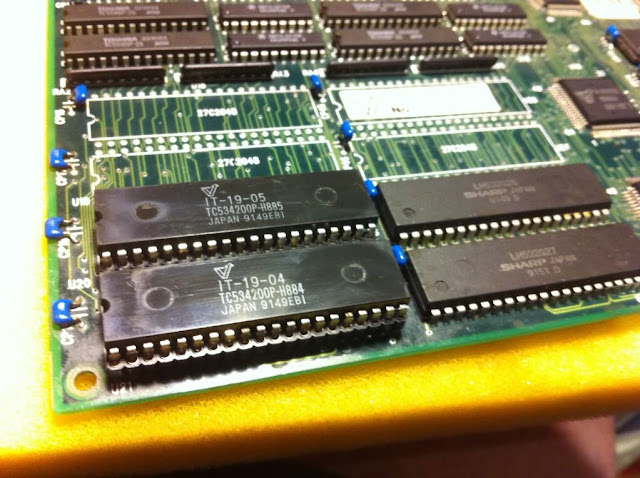 As a last thing, I needed to fit a new smoothing cap for the 12V rail. I didn't have one as big as 2200uF, so I dug up the biggest one I could find 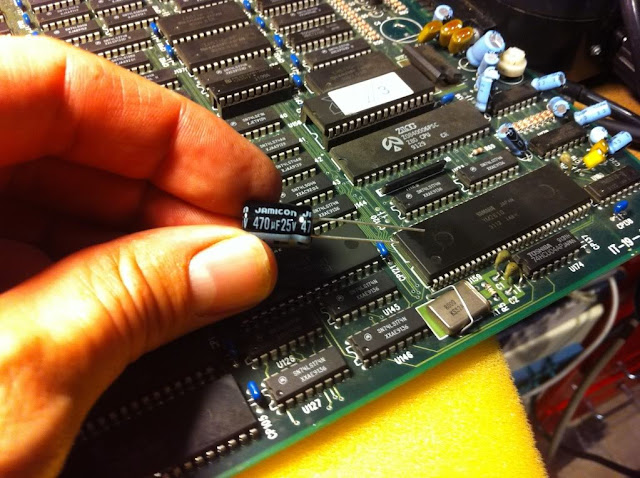 and just fitted that 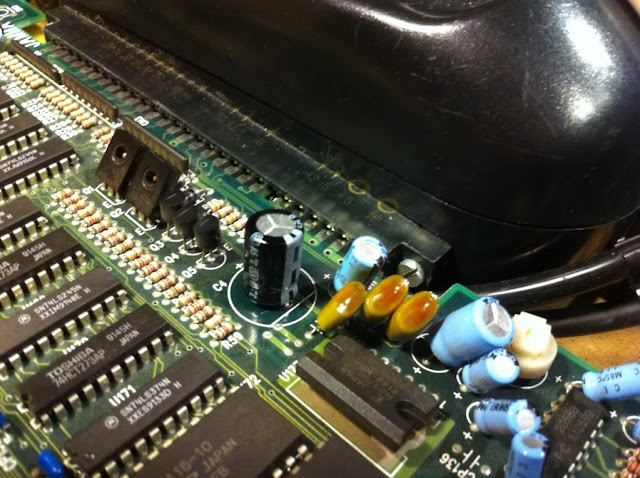 And last but not least: The Big Test };-P