I was bidding on an original working SNK Gang Wars on evilBay, a game I've been trying to find at a reasonable price for a long time, when I saw that the seller also had a defective original Technos The Combatribes on auction with a very low starting price. So I made a deal with the seller, that if I won both, I would only have to pay shipping for one (as they could ship in the same parcel). I made a low bid on the defective one also, and won both };-D
It arrived well packed and in good physical condition. When first powered up, all I got was a black screen with some occasional flickering. However I discovered, that when I turned up the voltage, and power cycled the PSU, I got a quick glimpse of the "Winners don't use drugs" splash screen before the display went black again. 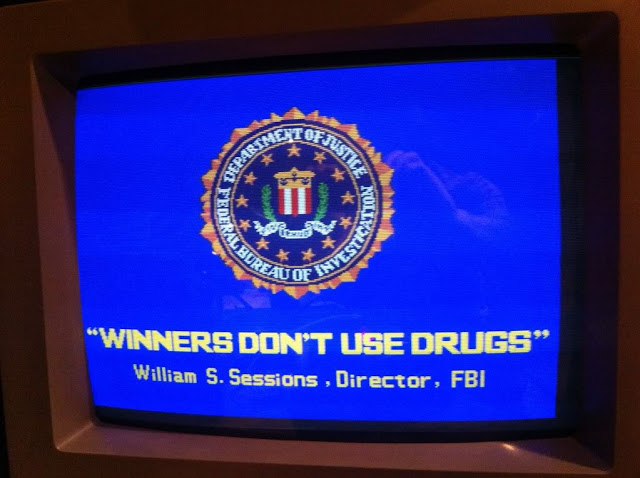 Tried beefing up the voltage a bit more, and when at 5.6V, it also continued into the Technos splash and then went black. 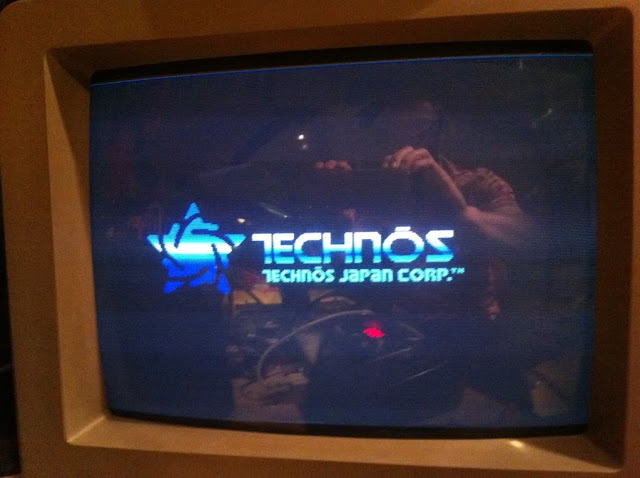 This was as high as I dared go. So turned it down to 5.2V again. With the power still on, my hand accidentally rested on one of the big custom SMDs, and suddenly the screen lit up with this flickering image: 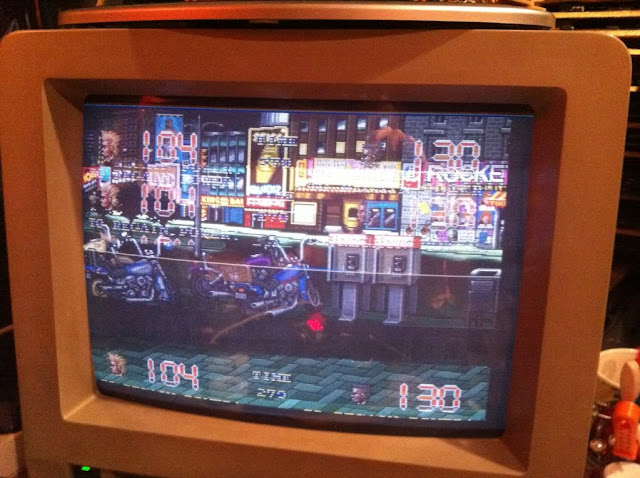 AHA! Now that was progress for sure };-P When pressing down on the IC with a finger, a couple of corrupted sprites also showed up for a few seconds... 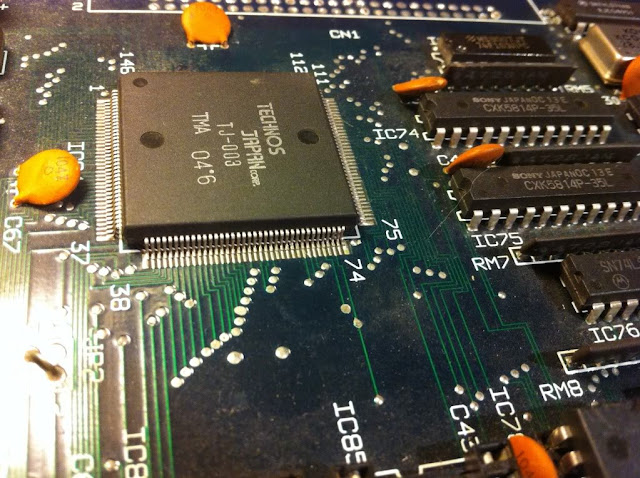 I looked with fear at the 144 very tiny pins, as I know that I really suck at SMD soldering. But I had to give it a try, none the less. The side shown in the above picture, was the one that stirred up graphics the most, when I pressed down on the pins, so I started with that. I had seen a youtube video, where a guy floods all the pins with liquid flux, puts a drop of solder on the solder tip, and drags it across all the pins. So I tried that 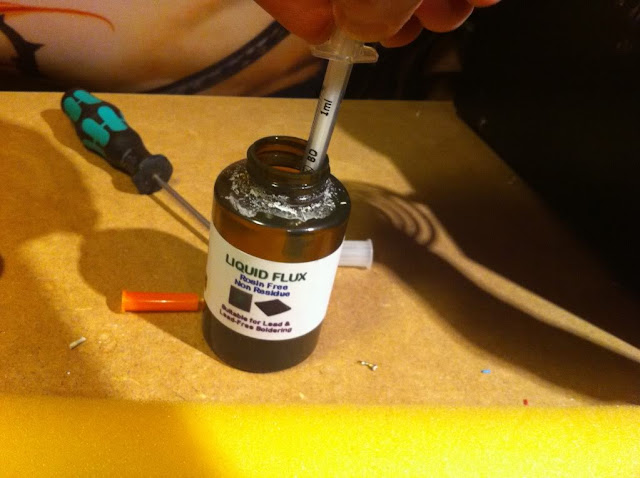 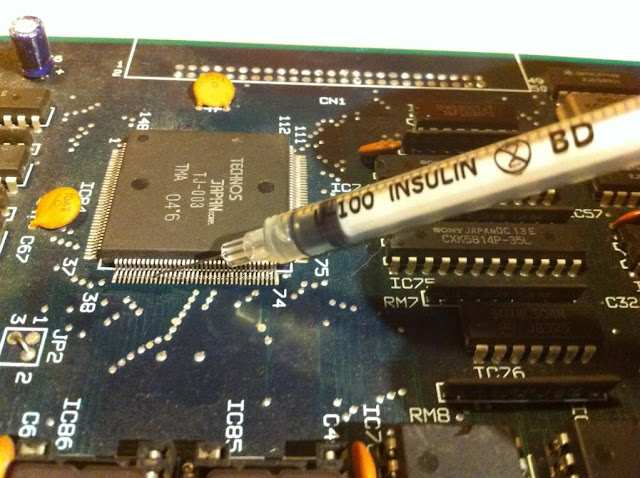 However it didn't go all that well };-S 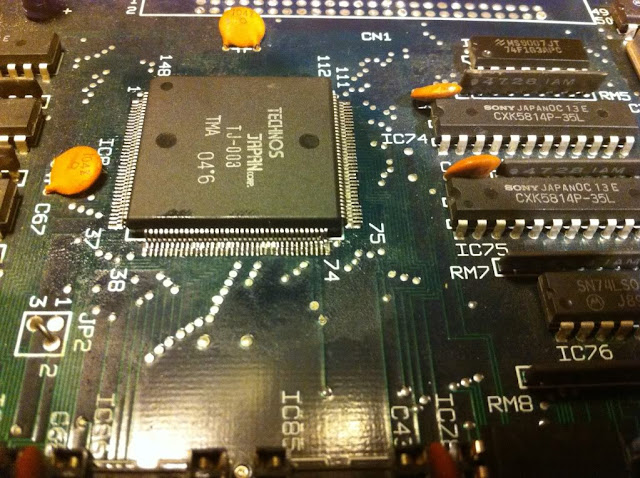 Some of the pins ended up a bit too bend, and one of the solder pads had lifted from the PCB, due to too much heat. So I started correcting my accident, using the soldering iron, a needle, and this little piece of homemade tool (made from a wooden barbecue stick and a piece of the sliding cover from an old 3.5" floppy disc) 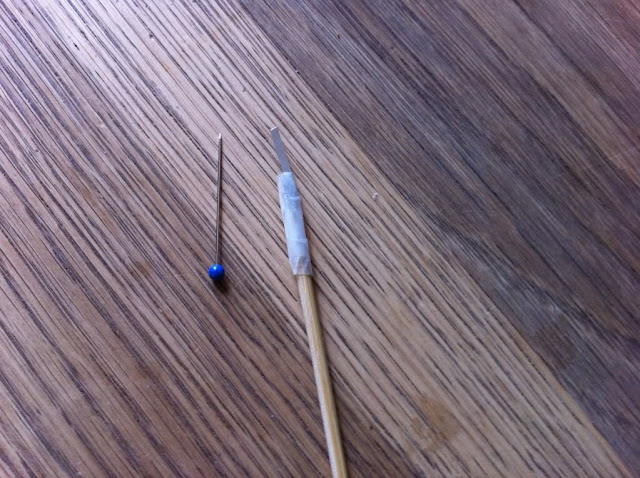 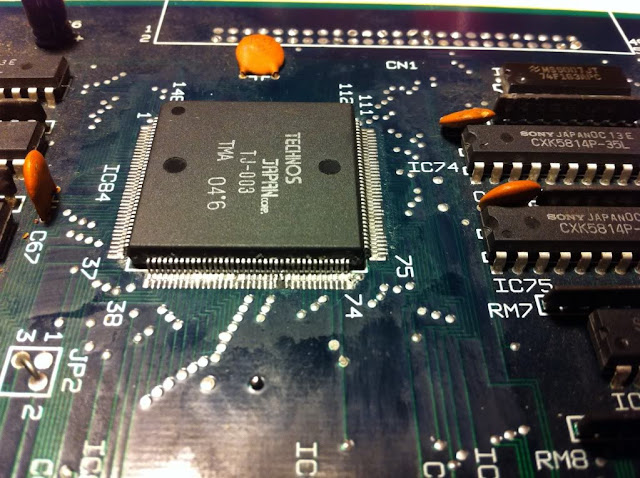 ...except for the fact, that I managed to rip the loose solder pad clean off };-( And to make bad worse, this circuit line came from somewhere under the IC and ended in the (now torn off) pad. However all the other pins and pads now made perfect contact and none of them were shorted };-P Applying the principle of saving the 'best' for last, I decided to reflow one other side of the IC, as it still stirred up graphics when I pressed the pins.
This time I tried contacting one of my colleagues, that I know have done SMD soldering professionally in a former employment, and asked him for good advise. Not surprisingly (considering my earlier poor reflow attempt) he told me that the 'drag-a-drop'-method is not very well suited for reflowing, but way better for 1st-time soldering of SMD ICs. Instead he suggested that I did the reflow one pin at the time using the following technique: Put the solder tip down at the end of the pad, then push it towards the IC pin, thereby scooping the small amount of solder on the pad to the pin. Of cause, remembering to flood all the pins in liquid flux first };-P And this reflow was a great success };-D 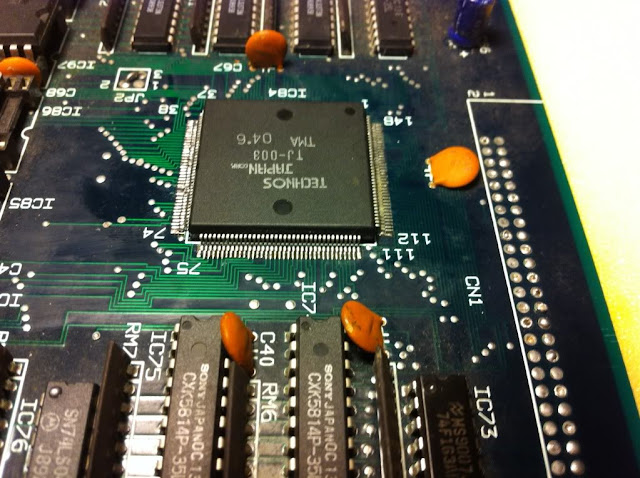 Many thnx goes to Rasmus for the great advise };-D
And now all the graphics was steady on the screen when pressing the pins, and even when I tried to flex the board.
The only problem now remaining, was the torn off pad... the sprites now looked like this, but besides that, all was perfect. 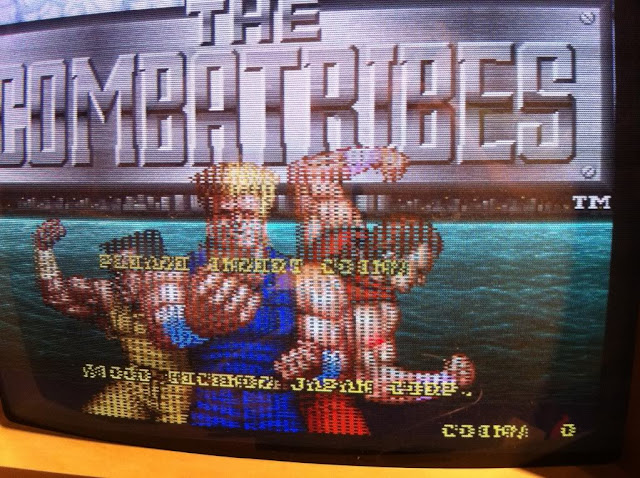 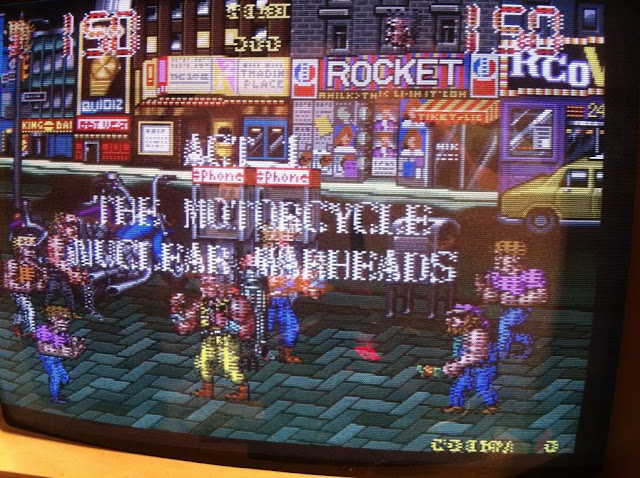 ...and I was pretty sure, that the missing pad was to blame.
Now, as the signal line comes from somewhere under the IC, I would have to find a patching point by trial'n'error. The pad is just 1 in a cluster of 4 that all have signals coming from under the IC. So I went hunting with the continuity tester, putting one probe on the neighboring pin, and started probing the vias under the IC from the solder side of the PCB. I found a connection in a cluster of 4 vias. I checked that the other 2 good pins were also represented in the cluster, and they were };-P So I soldered a long piece of kynar to the last via 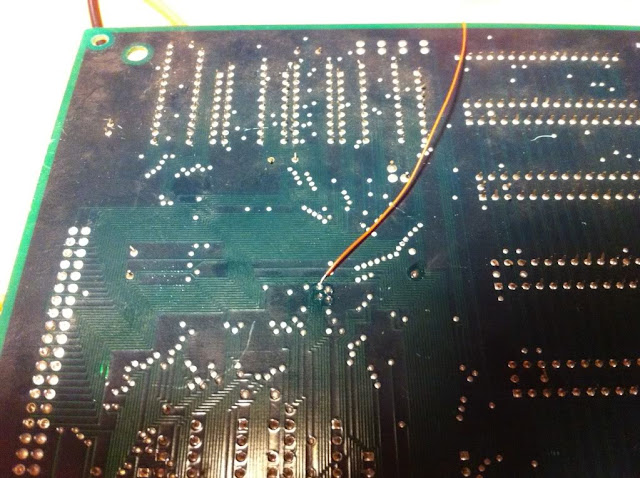 and pressed the other end against the floating IC pin 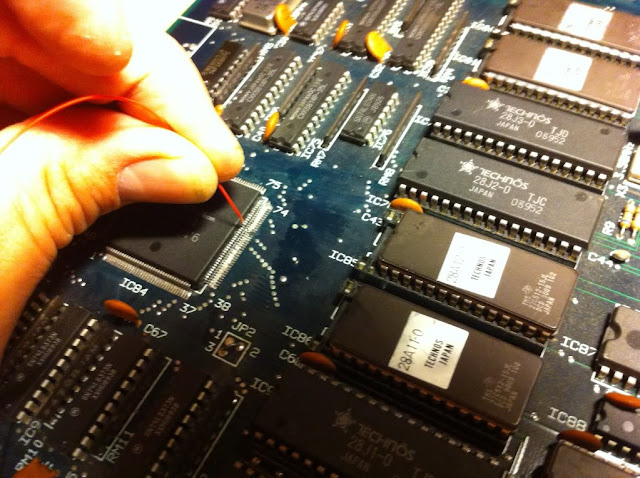 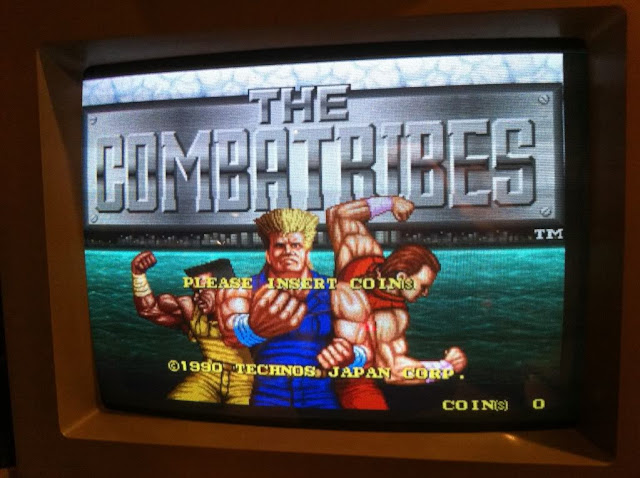 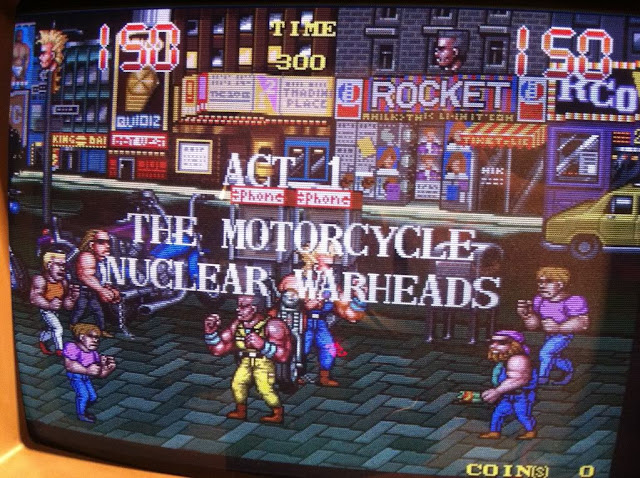 ...all sprites were perfect again };-D
Now I just had to make a nice and durable patch. I'm not a big fan of patching over the side of the PCB, so I located a nearby relatively big-holed via; cleaned it up using the desoldering gun, and routed the kynar through there. 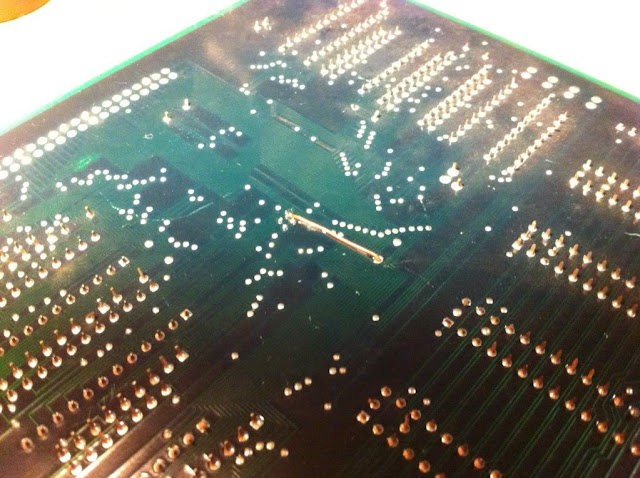 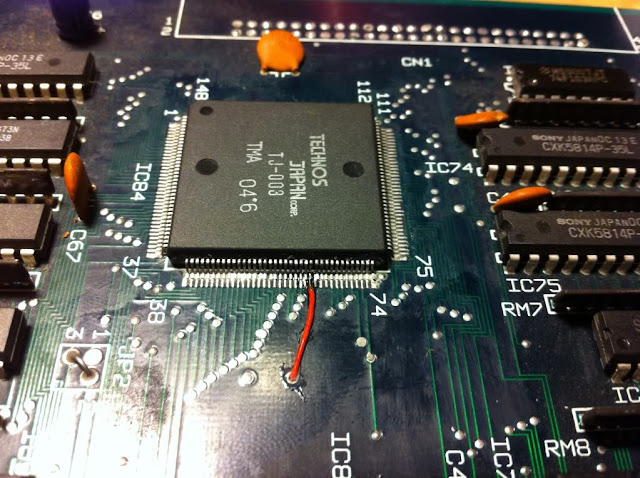 After checking that everything was still okay, I applied a few drops of superglue on the via hole and along the patchwire to make the repair more durable.

And this closes this repair log. I think this board is going up for trade, as I'm not a big fan of this particular brawler, and don't remember it from back in the days. Should you be interested in buying or trading it for defective PCBs, there's a contact link at the bottom of the page };-P
Posted by Elgen at 5/04/2013 03:44:00 pm