Some repairs can be very tedious and take you months (even years) of fighting with the PCB to complete. Others on the other hand can be both easy to diagnose and to repair. This is one of the latter. And I think it is important to tell about the full spectrum of difficultness. So here we go...

This little baby by NMK has actually already been on the table once before when I bought it as defective. But a couple of months ago, I decided to bring it to a cozy get-to-together with my dear friends at MadGearArcade (a private arcade set up with some candy cabs and SuperGuns in my friends living room };-P), as they all 3 love good shmups. It was just bobble wrapped and stuffed tightly into a bag-pack together 3-4 other PCBs. I know this is of cause not the optimal way of transporting arcade PCBs, but when you don't own a car and have to bike to get to your destination, and you also know how to fix brokes PCBs, this is actually how I usually transport them to different gatherings.

When I connected it in the a wonderful Sega Aero City and flipped the on-switch, I quickly discovered that something was wrong with the music and some of the sounds. Most noticeable was, that the intro music was played in level 1 instead of the normal music for that level (this video is not from that night, but shot with my tv and SuperGun).

After a quick visual inspection, I found this 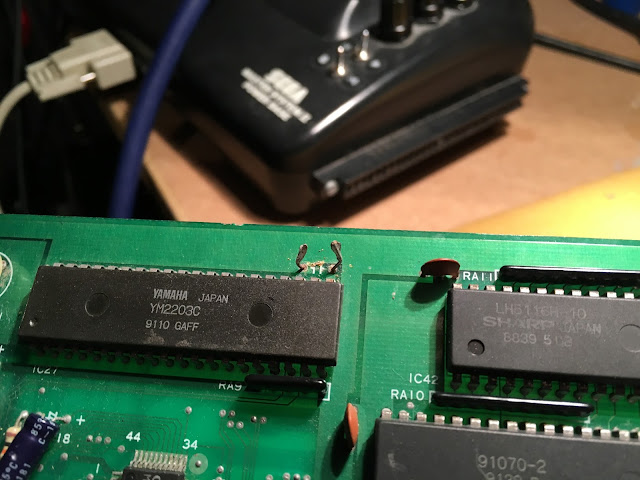 The smoothening cap right next to the sound chip had been crushed during transport. It would seem very likely, that this had something to do with the problem I was experiencing. All the other disc-caps for smoothening spread around the PCB is 0.1uF (code 104), so I removed the 2 broken-off pins, cleaned the holes, and installed a fresh one. 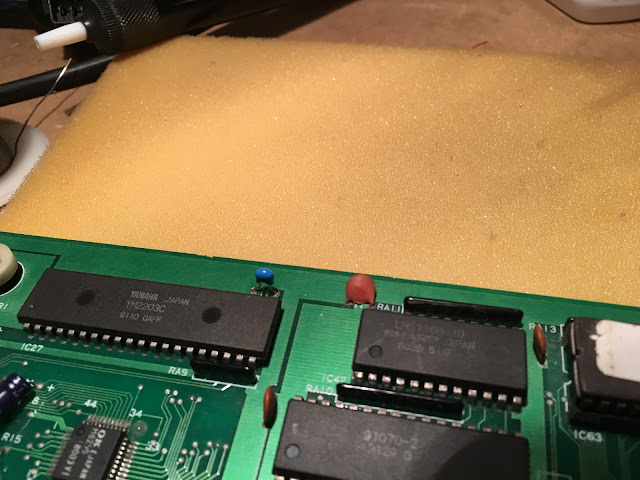 And now the music was in the right place again.

After playing a few games, I wasn't actually completely sure that music was completely right, but after inspecting an OST I found on youtube, I realised that I just have a bad memory. The music is ABSOLUTELY right now };-P
Posted by Elgen at 4/23/2016 03:39:00 pm